Amusement parks – the home of ultimate thrills. Loops, corkscrews, water rides, gravity-defying drops, food galore, games of accuracy and skill, cotton candy, fried dough, characters from television, and memories full of imagination and wonder. This is what you’ll see when you visit the many amusement and thrill parks that America has to offer. They can be found across every state, offering everything for everyone—for both thrill-seekers, and those who want a tamer experience, for those who only want to play games, for those seeking a day out with the kids, visiting the many characters of Disney and beyond. No matter what amusement park you go to, you’ll find something that fits your needs. Located in Sandusky, Ohio is one of America’s most beloved theme parks. Cedar Point always keeps its fans happy with a whopping seventy-two attractions in the park. It hosts fifteen roller coasters, with a new one coming in May of 2013, called the GateKeeper. This ride is set to take the title for the longest drop of any world roller coaster, which will attract thrill-seekers like bees to honey. Could you handle the GateKeeper? For anyone seeking some water fun, there is a separate water park called Soak City (which requires new hand stamps), although the main park does include three water rides to refresh anyone who needs a little cooling off. With thrill rides, water attractions, family events, and live entertainment, Cedar Point will remain one of America’s best.

How can it get much better than this? The Magic Kingdom – every kid dreams of one day reaching this oasis of fun, wonder, and imagination left behind in Walt Disney’s legacy. This theme park is known for its incredible rides – everything from the Legend of Jack Sparrow to the Sorcerers of the Magic Kingdom, to the Phineas and Ferb adventure, to the Chevrolet Test Track, to the Wild Africa Trek will be found here. This park is known for its Disney characters that walk around the park – you can see your favorite Disney princesses, such as Belle or Cinderella, your favorite heroes, like Woody and Jesse, or even the villains, like Captain Hook. And don’t worry, parents, Disney also has a spa called “Senses” just for you! Similar to most amusement parks, King’s Island of Mason, Ohio has a great assortment of rides for thrill-seekers and families. Many thrill-goers say that the Beast and Diamondback are some of the best excitement they’ve gotten from a ride! But family rides are plentiful too, such as the Grand Carousel or the Railroad. King’s Island has a great Kids Area, which for twelve years in a row has received the “Best Kids’ Area in the World” award. It has a PEANUTS theme, so come and join the fun with Snoopy, Charlie Brown, and the gang! In addition to its Soak City waterpark, there is also “Dinosaurs Alive!” which is a 12.5-acre forest that houses more than 60 life-sized animatronic dinosaurs. Travel to the Jurassic period at King’s Island! 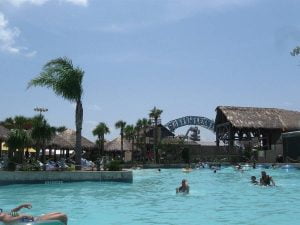 Schlitterbahn has four parks in the U.S., but the one in New Braunfels, Texas really takes the cake. What won’t you find in this awesome waterpark? From tube rides to tunnels to its own beach to boogie boards to surfing and countless other attractions, Schlitterbahn will not fail to disappoint anyone looking for some waterpark fun. And if the adults are looking for something to do, have no worries! The Biergarten Heated Pool and Swim Up Bar are perfect for some cool drinks and relaxation time. When they visit the park, many people sign up for the Stay and Play Package – giving you room discounts at The Resort at Schlitterbahn, and also discounted access to the waterpark. A great deal for anyone searching for lodging and fun!

The Disneyland Resort is simply a great place to stay – the resort itself is inhabited by three hotels. The first is Disney’s Grand Californian Hotel & Spa, themed with American Craftsman styles and containing a private entrance to the Adventure Park in Disneyland. There is also the Disneyland Hotel, newly renovated. Its architecture and theme were inspired by classic Disney ideas and Adventureland, and the hotel itself is often a wonder to all who stay in it. Lastly, there is Disney’s Paradise Pier Hotel, bringing all of its guests to a world of the beachfront boardwalk, seashores, and relaxation. Can you get much better than relaxing in a pool on the roof of the hotel—with a waterslide to boot? You will receive no shortage of luxury and worry-free days at the Disneyland Resort. Hands down, Knoebels is one of the best amusement parks for families. It hosts a great campground next door, with cheap rates, for campers with tents, campers looking for a cabin, and people with pop-ups, trailers, or RVs. And if you are looking for a more luxurious camping experience, the Eagles Roosts are available, fitting up to 8 people (6 adults). The amusement park prides itself as “America’s largest free-admission park.” Instead of paying one grand admission fee, each ride has its own price (all of which can be found on the Knoebels Amusement Park website). This allows families to pay for only what they ride, just in case they feel as if they are not getting their money’s worth at other, more expensive parks. Generally, the park is kid-oriented, with plenty of kiddie and family rides.

Both kids and adults will love this animal-themed amusement park. While there is also one in Tampa, Florida, this park is a great Virginian attraction. The park actually is home to sixteen rides, from the tamer Der Autobahn to the thrilling Alpengeist and Apollo’s Chariot. And if you’re looking for some water rides, you’ll find tons of fun in the Escape from Pompeii and the Roman Rapids. But where would Busch Gardens be without the animals? There are many exhibits, and while there you will be able to see eagles and other cool birds, horses, hissing snakes, snapping crocodiles, fierce wolves, and many more! Not only will you be able to get all the thrills that you’ve been seeking, but you can see real, live eagles, wolves, and other cool animals!

Exploring the magic at Universal Studios is perhaps the greatest theme park experience of all—where else would you be able to escape dinosaurs that jump out at you, battle Transformers, explore Hogwarts and the world of Harry Potter, escape the tomb of an ancient Egyptian mummy, help E.T. find his way home, defeat aliens with the Men in Black, and have fun with all your favorite movie characters? The experience is one of a kind, especially with the addition of the Wizarding World of Harry Potter, which has drawn millions of dedicated muggles and wizards from around the world. Here, you can see the Blue Man Group, participate in Fear Factor Live, live through a 4-D Shrek adventure, and visit the Universal Studios Orlando Horror Make-Up Show! It’s a blast! Six Flags theme parks are known for their fun, excitement, and thrills – and the Great America Park in Illinois does not fail to disappoint! Everyone will find a ride that suits them here. If you want max thrills, then BATMAN The Ride Backwards, Dare Devil Dive, Giant Drop, or Hammerhead and Barracuda may be for you. But if you want a ride that the whole family, including the young ones, can enjoy together, then you’ll have a blast on the Whirligig, the Whizzer, the Chubasco, or any of the other rides. And of course, if the kids want to go on a ride by themselves, there are many rides (and a lot of water adventures), including Buccaneer bay, Scooby Doo’s Mystery Machine, and Yogi’s Yahoo River! Legoland is home to a whole resort, complete with a hotel and theme park. This amusement park is perfect for LEGO lovers everywhere—you will see enormous sculptures built entirely out of LEGOs. You can visit Dino Island, where kid explorers can search for fossils, lie inside of a life-sized dinosaur footprint, go on dinosaur-themed roller coasters, and more! Fun Town is an area of Legoland, where every LEGO sculpture is life-sized, so you feel like you’re really in a LEGO world! You can also visit Pirate Shores, Duplo Village, Castle Hill, Land of Adventure, Imagination Zone, and Miniland USA! There’s also a waterpark and even an aquarium! There will be no shortage of things to do here, for both kids and adults. Kids can explore, and adults remember their LEGO-filled childhoods!

America is home to countless theme parks – whether you’re looking for thrills, fun in the water, or just some sweet relaxation, you’re sure to find something!