The 10 Best Bagan Temples In Myanmar

More than 10 centuries ago, the area of Bagan in central Myanmar hosted over 10 000 religious structures, built to prove the magnificence of the former capital of the Pagan empire. Since then, a large portion of them was destroyed or irreversibly damaged, mostly due to earthquakes. The last big one took place in 2016 and caused significant damage to some of the most well-known temples, as the Sulamani or Htilominlo. But still, over 2 200 of them remained until these days and stand as of the most unique tourist attractions in whole Asia. Sounds like too much to handle in your limited time? Let’s discover together the 10 best Bagan temples in Myanmar.

One of the things which make visiting Bagan so unforgettable is for sure the morning flights of hot air balloons over the field with the thousand years old pagodas. During the flight season from October to April, over two dozen of hot air balloons take off during the sunrise and silently provide their passengers with one of Asia’s most iconic views. However, basically the same can be said for those who stay on the ground and observe the balloons flying over their head from the top of the ancient temples. Unfortunately, the chance to do the latter will be probably soon gone, as the government decided to close the temples for tourists.

Before we get to the top 10 temples themselves, let’s clear out one thing first. If your archeological knowledge is similar to mine – basically nonexistent – you are probably asking yourself one thing. What is actually the difference between a pagoda, a temple, and a stupa? Well, I was myself really confused by this distinction, so I made a little research to find this explanation:

Pagoda is just a generic term for stupa or temple.

Stupas are pagodas that you can go around, but you generally can’t go inside, as there is no entrance. A good example from our list is the Swezingon pagoda or the Shwedagon pagoda in Yangon.

Temples are pagodas that are built to be entered and typically they have four entrances located at each side – North, South, East, and West and there is a Buddha statue placed at each entrance.

The 10 best temples in Bagan

The relative value of the temples, unfortunately, changed substantially in January, when the government decided to close most of them for tourists. But if you still want to enjoy the beautiful sunrise from atop of a temple, do not worry, you still have a chance. Read until the end of my list of the 10 best Bagan temples. The largest and the most impressive of the temples in Bagan. It is impossible to miss it, as it is visible from most of the places in the area. The story goes that the temple was built as an atonement for king Narathu, who usurped the throne after killing both his father and older brother. However, the king got killed as well before the temple was finished and thus the building never reached its full potential. Still, it doesn’t make it any less gigantic and probably the most Indiana-Jones-like temple in the whole Bagan. 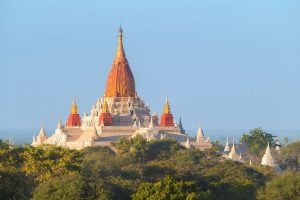 The oldest, the most unique, and also the most beautiful temple in the whole Bagan. Anything else I need to say? The Ananda pagoda will surprise you with its white color and elegant design which makes it feel almost” royal” compared to the red/brown falling apart brick look of the other temples. 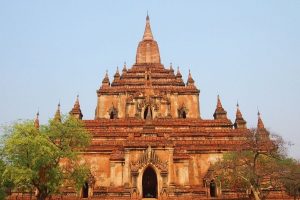 One of the largest and the most popular temples in Bagan and also one of the most severely damaged by the 2016 earthquake, from which it is still recovering. Known especially for the finest frescos in Bagan which you can find inside and also its symmetrical design, which stood as a model for the younger Htilominlo Temple. A younger sibling of the Sulamani Temple shares a lot of its features, including the severe damage suffered by the earthquake in 2016. 46 meters tall, it is known for its elaborate plastic moldings and for being located a bit away from most tourist areas. Despite the still undergoing reconstructions, the temple belongs among the most beautiful in Bagan. Thatbyinniyu holds the title of being the tallest of Bagan’s temples and it is truly majestic from every place from which you can spot it. It is also easily recognizable due to the untypical shape of its roof and the light color of its walls. Unfortunately, it can get pretty touristic, as it lies very close to the Old Bagan town. To get the best morning views of the temple with balloons above it, spend the sunrise on the Swegu Gyi Paya Pagoda located just a couple of hundred meters away.

Finding this isolated temple will cost you a bit of effort, but the reward is totally worth it. Not only you will be almost certainly completely alone when exploring it, but you will get a great chance to take some amazing shots. The central stupa is enclosed with a wall with two gates which offer a perfect opportunity for framing your shots. If you are brave enough, check out the group of bats living inside the temple.

How to find it: Mark the Let Put Kan temple on your Google Maps. Follow the road from the Sulamani Temple to the Minnathu village until the Sinbyushin Monastic Complex. Turn to the dusty road leading along and behind the Complex and follow it until you reach the temple with Google maps help. 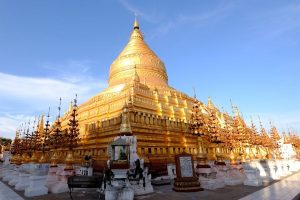 Feeling tired from all the thousand years old pagodas all made of red bricks? Then the Swezingon pagoda is your chance to experience something completely different. Covered all in gold, it resembles a small version of the amazing Shwedagon Pagoda in Yangon. It is also not located on a dusty field, but in a peaceful temple complex inside of the Nyang-U town.

The Secret View Temple is a great mid-sized temple with a flat roof located conveniently in the center of the Bagan Archeological Area and very close to the hot air balloon’s morning flight trajectory. The temple is still officially opened to the public and hosts about 20 tourists observing the balloons every day. We fell in love with this temple, as it offers not just great views on other pagodas, but it is very photogenic on its own. 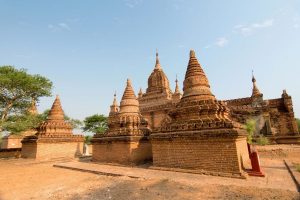 Pagoda 761 lies just a few hundred meters from the Secret View Temple and as such offers similar views. It can be easily found on Google Maps. It has been officially locked down and there is a bar on the main entrance, however, someone decided to re-open it again. There is a hole in the bars, convenient enough to slip in and you can see about a dozen tourists observing the balloons from there every morning. The Swegu Gyi Paya is located very close to Old Bagan and you can easily recognize it thanks to its whitish color. It has a spacious terrace that offers a reasonable view around the surrounding temples including the Thatbyinniyu pagoda. The terrace is still officially open due to its location close to the town and it is quite busy even throughout the day. I have not been there during the sunrise, but I can imagine it can get pretty crowded.