India is known for countless exotic beaches that make it one of the preferable choices for beach lovers.

The south-eastern and south-western states, including Goa, Kerala, Orissa, Karnataka, Gujarat, and Maharashtra are known for many beautiful beaches and shorelines. It attracts a large number of foreign tourists, thereby contributing a lot to the country’s economy.

We’ve rounded up the list of Top 10 most beautiful beaches in India that you must visit if you are a beach lover.

Sree Janardhana Swami Temple and Sivagiri Mutt Temple are the two most famous religious places that lie near the beach. 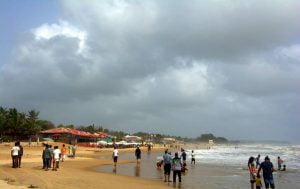 Baga beach, located in North Goa, is a nice weekend escape, where you can find all sorts of entertainment. It is one of the most famous beaches in Goa.

The beach is best known for its numerous water sporting activities, like parasailing, banana ride, Speed Boat, and Bumpy ride. It is surrounded by some of the most famous restaurants of goa, including the “Brittos”.

It happens to be a perfect place for partying and hangouts, which makes it one of the busiest beaches in Goa. It is one of the favorite beaches among foreign tourists.

Kovalam beach, located in south Kerala, is the second most popular beach of Kerala, after Varkala Beach.

Palolem beach located in Chaudi, South Goa, is the second goan beach, in our list of top 10. It is the most visited beach of South Goa.

The beach is enclosed by a thick forest of coconut trees. It is one of the most beautiful beaches of Goa and attracts several local and foreign tourists.

Candolim beach, located in North Goa, is one of the longest beach in the state. It is the second most visited beach of North Goa, after Baga beach.

The beach begins at Fort Aguada and ends with the “Calangute beach”, another most popular beach of Goa. It is considered to be the most peaceful and calm place in goa. Standing next on the list of top 10 is the “Agonda Beach” located in the southernmost Canacona Taluka of Goa. The beach is famous for its blue ocean, sandy shore, various species of birds, and divine calmness. You won’t find the beach “much crowded” as compared to other beaches of the state. You can bargain with local fishermen, for cheap dolphin rides.

Another Goan beach, “Mandrem Beach”, known for its calm and clean atmosphere, stands next on our list. The beach is not much crowded like other popular beaches in the city. It is one of the most peaceful and less noisy beaches of North Goa.

It is one of the most recommended locations for honeymooners in Goa. You can take a private hut at the beach and enjoy the silence and calmness of the seashore.

Cherai beach, the most beautiful beach located at the Vypin island of Kochi in Kerala. It is also known by the name “Princess of Arabian Sea”. This beautiful beach is a wonderful “getaway” from the busy lifestyle of “Kochi”.

Cherai can be reached by water or by road. You may get off at Cochin International Airport at Nedumbassery and take a cab from there, to reach Cherai. The distance between the airport and the beach is only 22 km.

For tourist convenience, a newly constructed bridge from Ernakulam can be accessed that provides an easy way to the beach. Tarkarli beach, located in the Sindhudurg district of Maharashtra, is positioned at number 10 in the list of top 10 Beaches in India. It is really a fabulous water body aided with crystal clear water. It is considered as a substitute for Goa for seafood and beautiful beaches.

“Tarkarli” is the name of the village, located on the coast of Maharashtra state, 546 km away from Mumbai. The local villagers manage the homestays over there, in a very systematic manner with mind-blowing hospitality. “Tourism” is the main source of income for them.

FacebookTwitterPinterestEmailLinkedInWhatsApp
Tags: beaches in India, most exotic beaches of India
Search here…
Start your own Website