The lasting legacy of the Hoysala Dynasty can be found at the magnificent Chennakeshava Temple of Belur, Karnataka. This South India religious destination, comprised of several Hindu temples, lies in the heart of Belur and is the major draw to this former Hoysala capital city.

It took more than 100 years to complete the exceptionally large and lavish temple which boasts a new style of architecture for which the Hoysala’s became well known. They conceived their shrines as star-shaped structures rather than the traditional cubical form. Chennakeshava Temple is an exemplary example of this newfound style of building and remains a premier Hoysala monument. Students of architecture, as well as historians, are marveled at its form. The temple is currently a proposed UNESCO World Heritage Site.

Entry into Chennakeshava Temple complex is via a seven-story gopuram which can be seen well in advance of arrival. Just one entrance gateway allows visitors and followers to pass through the massive stone wall surrounding the collection of temples.

Chennakeshava Temple stands directly opposite the entrance gopuram and instantly draws tourists forward. Three distinct pieces of architecture can be seen within the soapstone monument: A platform, an open hall, and the shrine. First, the platform, or jagati, stands several feet tall from ground level. It is an essential part of the overall design of the monument. Eight steps lead to the outer platform ring flanked by miniature shrines. This platform provides a walkway around the exterior of the temple. An additional eight steps lead into the second part of the monument, the open hall or mandapa. Traditionally mandapas are open column hallways that extend from the inner shrine. In the case of Chennakeshava Temple, stone pillars protrude from a parapet wall about 6 feet high to hold up the roof. Ornate stone screens were later installed between the roof and the parapet walls thus giving the illusion of walking into an enclosed room. Lavish sculptural decorations and depictions, some of them extremely delicate, span the hall. Finally, the larger than usual inner pavilion or Navaranga is finished in stunning fashion. Forty monolithic pillars in either stellar or circular shapes are covered in hand-carved motifs. The presiding deity is a 6-foot manifestation of Lord Krishna or Keshava, an avatar of Lord Vishnu for whom the temple is dedicated.

One of the many architectural highlights of Chennakeshava Temple is the 42 bracketed figurines called Madanikas or celestial nymphs (figures of women in ritual dancing poses) attached between the roof and top section of pillar along the exterior walls. Of the 42 Madanikas, 38 are found outside while the remaining 4 figurines are located within the stunning Navaranga ceiling. The detail-rich carved stone figures are said to be exclusive to Belur. Unfortunately, they are also susceptible to weather. Time has worn away many of the finest details while some of the carvings are missing substantial pieces altogether.

The other major architectural highlight of Chennakeshava Temple is the rows of friezes along the outer temple wall. The lowest frieze depicts 650 charging elephants, no two shapes alike. Their presence symbolizes stability, tremendous strength and is considered the weight lifters of the temple. Above the elephants are lions, symbolizing courage. Horses are shown on the next row, a symbol of speed. The next row of bead garlands represents beauty. The fifth row shows small figures of men and women dancing and playing musical instruments. Finally, a sixth row depicts ladies in various poses. 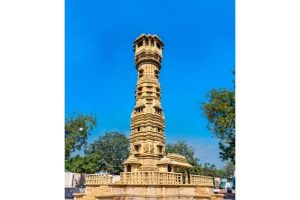 This pillar, customarily found in front of many Vishnu temples, stands adjacent to the Keshava Temple. Garuda, Lord Vishnu’s carrier, once could be seen atop the stone pillar. The weather has damaged the figure beyond recognition. Tour guides are particularly quick to demonstrate how the stone pillar is seemingly floating above the rock base. To illustrate this marvel, paper is pulled between the two surfaces. And yes, it really does appear to be floating. Similar in style to Kesava Temple, while less opulent, is Kappe Chennigaraya Temple. The two-cell temple is situated south of the main temple and also rests on an elevated platform. Far less detail can be seen along the stone walls and pillars aside from a beautiful 6 1/2 foot high sculpture of Chennakeshava inside. Bracket figures can also be seen attached to four navaranga pillars, as found within the Keshava Temple, along with Hoysala emblems and lotus medallions. Far less attention has been afforded to the somewhat dilapidated Rama Temple devoted to the 7th incarnation of Lord Vishnu. Few architectural details can be found inside or outside the drab stone building constructed with a traditional open-air mandapa. The elevated platform from which the temple is built upon is a fraction in height compared to the other neighboring temples. Large sun-soaked sections of the stone platform base are used by temple volunteers to dry fruits and other foods. Few tourists venture this far from the main attraction. This temple located southwest of the Keshava Temple blends a mixture of architectural elements seen at both the Rama and Keshava Temple. An elongated mandapa extends from the inner sanctum over the elevated platform and staircase onto the stone courtyard. Stone columns similar to Rama Temple’s simplicity can be seen holding up the furthest extension which was later added to the original design. Circular monolithic columns support the roof section covering the elevated platform entrance. A shikhara can be seen only from a side view as it is blocked from the height of its mandapa. A miniature shrine is attached to the tower above the mandapa, topped with elegant carvings of peacocks and lotus flowers. Small, compact, and eye-catching, the Veera Narayana Temple exterior is covered in gorgeous carvings of both Vishnu and Shiva faiths. Fifty-nine large images can be seen along the outer wall including Vishnu, Shiva, Brahma, Ganesha, Parvati, and Saraswati. Also sitting on a slightly elevated platform, this is the only temple of it’s kind within the Chennakeshava Temple complex. 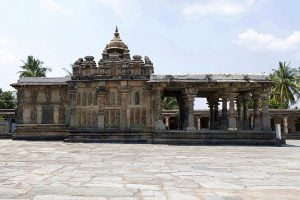 A temple for female gods. Andal Temple is devoted to the goddess Andal, also known as Ranganayaki Temple. It’s compact elevated platform is adorned with friezes of elephants, scrollwork, and scenes from the Puranas (ancient Hindu literature). An open-air mandapa, supported by circular columns, is attached to the inner sanctum. Barely visible is a squat shikhara above the inner shrine. What really captures visitors’ attention is a row of 31 large deity images.

What The Guidebooks Won’t Tell You

Be sure to look for the Hoysala royal emblem upon entering Chennakeshava Temple. This emblem is a trademark of all Hoysala Dynasty temples, found at the entrance of almost all their temples. The words Hoy Sala mean “strike Sa’la!”, hence the carved image is of Sa’la, the legendary head of the Hoysala Dynasty, killing the tiger. It is from this real-life act that the dynasty name, Hoysala, originated.

The shikhara or tower above the inner sanctum of Chennakeshava Temple is gone. No detail is given as to why the common architectural feature of most Hindu temples is missing.

Flat stones make up the entire temple courtyard surface. Glaring South India sun bakes the stone to an unforgiving temperature upon which bare feet singe quickly. Walking between numerous temples is an exercise in short sprints from the shaded area to the shaded area. Red-colored runners made of jute or some other natural fiber can be seen extending from the entrance to Chennakeshava Temple, and then around the upper platform base. These mats are to be used to avoid hot stones. Unfortunately, they are not provided beyond Chennakeshava Temple.

Few major Hoysala sites remain as well kept as that of Belur Chennakeshava Temple. Architectural details found here are some of the finest examples of the Hoysala Dynasty. Numerous books have been written delving into specific artists, their techniques used, and the relevance of included images. However, tourists can get an abbreviated version through pick-up guides that humorously walk visitors through a brief history of the temple while pointing out its most important features. Plan on a minimum of 1 hour to visit the temple bearing in mind some tourists spend days here.

Admission is free and open to people of all faiths. Cameras are allowed without charge but may you may be asked not to photograph certain deities.

Pick-up guides are available upon entry. Foreign languages besides English must be prearranged through a travel agent. Avoid any guide offers outside the temple and arrange a fee upfront for ALL people in your party. A general guideline would be no less than Rs 300, no more than Rs 500 per person up to 2 people. Additional small fees inside the inner shrine are requested (and can be declined) to operate lights that illuminate ceiling carvings.

Shoes are not allowed inside and may be left at an attended shoe stall. Beware of outrageous fees assessed by attendants spoiled by the wealth of temple visitors. Rates of more than Rs 20 per pair of shoes are laughable and should not be paid. If in doubt, leave your shoes alongside the pile locals use for free just outside the main entrance.