Dharamshala is a popular tourist destination located in the Indian state of Himachal Pradesh. It is known for its scenic beauty, temples, and monasteries, as well as for being the residence of the Dalai Lama. Visitors can explore the Tibetan culture and tradition, visit the McLeod Ganj, which is also known as “Little Lhasa” and is home to many Tibetan exiles, and hike in the nearby Dhauladhar mountain range. Other popular activities include visiting the Bhagsunath Temple, the War Memorial, and the Norbulingka Institute. Here Top 15 Places to visit in Dharamshala. Also known as “Little Lhasa,” this is the residence of the Dalai Lama and a major center of Tibetan culture and tradition. Visitors can explore the many temples and monasteries, such as the Namgyal Monastery and the Tsuglagkhang Complex, which is home to the Dalai Lama’s residence and the main temple. Visitors can also explore the many Tibetan-run small shops and restaurants which serve traditional Tibetan food. The town is also home to a wide range of Tibetan-run small businesses, including workshops producing traditional Tibetan arts and crafts. There are also several schools and institutes, such as the Library of Tibetan Works and Archives, that provide visitors with a deeper understanding of Tibetan culture, history, and religion. This ancient temple is dedicated to Lord Shiva and is known for its natural hot springs, which are believed to have healing properties. Visitors can take a dip in the springs and also take a tour of the temple’s intricate architecture. The temple is surrounded by beautiful gardens and also has a small stream flowing beside it which adds to the serenity of the place. The temple also has a statue of Lord Shiva in the inner sanctum which is believed to be over 1000 years old. This monument is built in memory of the soldiers who lost their lives in the Indo-China and Indo-Pak Wars. The memorial offers a panoramic view of the Dhauladhar mountain range and is surrounded by beautiful gardens. Visitors can also see the names of the brave soldiers who lost their lives inscribed on the walls of the memorial. The memorial is also surrounded by a park which is a popular spot for picnics and family outings. 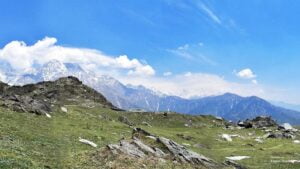 This mountain range offers a variety of trekking and hiking options for visitors. Some popular trails include the Triund trek and the Kareri Lake trek. The Dhauladhar range is also home to several species of rare birds and animals, making it an ideal destination for nature enthusiasts. The trek to the Triund is considered to be one of the most scenic and beautiful treks in the region. The trek offers breathtaking views of the Dhauladhar range and the Kangra valley.

6. John in the Wilderness:

This beautiful church is located in the forest and is known for its Victorian-era architecture. Visitors can also take a walk around the surrounding forest to see a variety of flora and fauna. The church is also home to a cemetery that has graves of some of the most prominent British officials who served in the region during the colonial period. The church is also a popular spot for bird watching as several species of rare birds can be spotted here.

This complex is home to several important temples, including the Kalachakra Temple and the Namgyal Gompa. Visitors can also attend teachings and prayers given by the Dalai Lama at the main temple. The complex also has a library that has a collection of Tibetan literature, some of which is over 1000 years old. Visitors can also attend traditional Tibetan cultural shows which are held at the complex from time to time. This is one of the most important monasteries of the Kagyu sect of Tibetan Buddhism. It is known for its beautiful architecture and intricate murals. Visitors can attend prayers and meditation sessions at the monastery, and also take a tour of the main temple and the surrounding buildings. The monastery is also home to a collection of ancient Tibetan manuscripts and thangkas, some of which are over 400 years old. Visitors can also attend traditional Tibetan Buddhist teachings and ceremonies, such as the Kalachakra, which are held at the monastery from time to time.

Dharamshala is known for its beautiful tea gardens, and visitors can take a tour of the tea gardens to see the process of tea production. Visitors can also taste the different varieties of tea produced in the region, and purchase tea from the local tea factories. The tea gardens are also a popular spot for picnics and nature walks, as they are surrounded by beautiful mountain ranges.

Dharamshala is home to one of the most picturesque cricket stadiums in the country, and visitors can take a tour of the stadium and see the ground from the stands. The stadium is also a popular spot for picnics and family outings, as it is surrounded by beautiful mountain ranges. Visitors can also attend cricket matches which are held at the stadium from time to time.

This is one of the most important centers of tantric Buddhism in the region. Visitors can attend teachings and prayers given by the lamas at the university, and also take a tour of the main temple and the surrounding buildings. The university also has a library that has a collection of tantric literature, some of which is over 1000 years old. Visitors can also attend traditional tantric ceremonies, such as the Kalachakra, which are held at the university from time to time.

This is one of the oldest and most important forts in the region and dates back to the 17th century. Visitors can take a tour of the fort and see the ancient architecture and the beautiful views of the surrounding mountains. The fort is also a popular spot for picnics and family outings, as it is surrounded by beautiful mountain ranges. Visitors can also attend cultural shows and fairs, which are held at the fort from time to time.

This museum is dedicated to the art and culture of the Kangra valley, and visitors can see a variety of traditional art forms, such as paintings, sculptures, and textiles. The museum also has a library which has a collection of literature, some of which is over 1000 years old. Visitors can also attend traditional cultural shows and workshops, which are held at the museum from time to time.

This is a beautiful railway line that runs through the Kangra valley, and visitors can take a train ride and enjoy the beautiful views of the surrounding mountains. The railway line is also a popular spot for bird watching, as several species of rare birds can be spotted here. Visitors can also attend cultural shows and fairs, which are held at railway stations from time to time.

The best time to visit Dharamshala, a hill station in the Indian state of Himachal Pradesh, is from March to June and from September to November. During these months, the weather is pleasant, with clear skies and comfortable temperatures, making it ideal for outdoor activities and sightseeing. However, during monsoon seasons, landslides and blocked roads are common.

How to reach Dharamshala

Dharamshala can be reached by various means of transportation:

Keep in mind that the road to Dharamshala can be steep, winding, and narrow. It’s advisable to drive carefully and follow traffic rules.

Dharamshala is known for its delicious and diverse food options. Some famous foods to try in Dharamshala are:

There are many restaurants and street food vendors in Dharamshala that serve traditional Himachali and Tibetan food. Some of the best places to try these foods are McLeod Ganj, Bhagsu, and Dharamkot.

Note: McLeod Ganj is known for its Tibetan street food, it is a must-visit place for foodies.