Table of Contents hide
1 Escape to Kanyakumari – Why you should love this southern-most tip of India
1.1 Mesmerizing view of sunrise and sunset
1.2 Vivekananda Rock Memorial
1.3 Temple of Kanyakumari
1.4 The giant Thiruvalluvar statue
1.5 The landscape of the district Kanyakumari
1.6 The unique climate of Kanyakumari
1.7 A place is known by all Indians
1.7.1 Related posts:

While opting for Indian holiday packages, you may easily slip into a vacation which can lead you to one of those most iconic destinations in our country. Kanyakumari is one of the top tourist places in India as it is considered as the southern-most tip of peninsular India. This is a worthy ending point of a spread of land which stretches for hundreds of miles and encompasses all sorts of topographies within its cusps.

Kanyakumari was previously known as Cape Comorin and is beautifully nestled at the confluence of the Arabian Sea, Indian Ocean and the Bay of Bengal. The place has been one of the greatest centres for religion and art for many centuries. It was kingdom of the Cheras, the Cholas, the Nayaks and the Pandyas. Kanyakumari is a famous tourist destination for multiple reasons. Here’s why you should consider traveling to this southern part of mainland India.

Mesmerizing view of sunrise and sunset

Once you visit Vivekananda Rock, you can be a witness to this splendid sight of sunrise and sunset. Kanyakumari is particularly popular for this mesmerizing sight as the place is entirely surrounded by water. If you visit this place on full-moon evenings, you can witness the moonrise and the sunset together. It is indeed a beautiful and rare sight to behold. 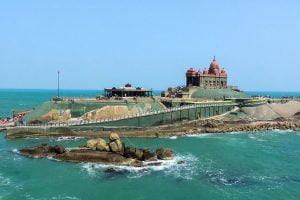 The Vivekananda Rock Memorial is just a few hundred metres from the shore and you can take a ferry to reach this place. This is a memorial which was built in 1970 in the honor of Swami Vivekananda. You’ll love this place and this is not something that you should miss when you visit Kanyakumari. 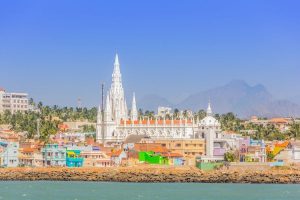 The most ancient and oldest landmark in Kanyakumari is the temple which is built in dedication of Goddess Kumari who used to pray to Lord Shiva to accept her as his wife. Though according to South Indian standards, the temple is small, it is a must-visit. 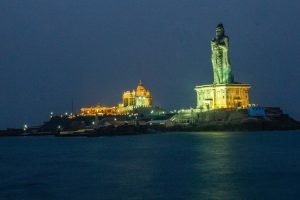 The mammoth Thiruvalluvar statue is indeed an awesome sight that you shouldn’t miss visiting in Kanyakumari. The sculpture has been done by a popular Tamil philosopher and poet named Thiruvalluvar. He is also famous as the author of Thirukkural. This statue is 133 feet tall and it is located very near to Swami Vivekananda Rock Memorial. They are considered the 2 major landmarks of Kanyakumari.

The landscape of the district Kanyakumari

In Tamil literature, the lands of Tami Nadu are categorized in 5 parts, Mullai, Kurunji, Marutham, Neital and Palai which are known as forest, mountain, cropland, seashore, and desert. Whenever you visit this place, you will most probably see the first 4 among them as there’s no desert in Kanyakumari.

The unique climate of Kanyakumari

A place is known by all Indians

Kanyakumari is pretty famous and a north Indian might not know any other districts of Tamil Nadu. The famous saying Kashmir to Kanyakumari implies the beginning and the end of our great country.

Therefore, if you’re planning to visit South India, don’t miss visiting this exotic place called Kanyakumari. As you can see there are indeed lots of reasons to visit this place and make it a memorable vacation.