What do the festivals of India signify?

India is a country representing harmonious combinations of various faiths and sects. It is known the world over for its brilliant unity in diversity. The colorful festivals of the country impart unparalleled beauty to this amazing land. The most popular of the many festivals in India are Holi, Dussehra, Diwali, Eid, Janmashtami, and Makara Sankranti. There is a no better option to gain an insight into the chromatic culture of the country than taking part in its grand and pompous festivals.

Which are the popular festivals?

Holi, a festival of mirth and glee, is one of the most buoyant festivals of the Hindus. It is celebrated on the Full Moon day in the month of Phagun as per the Hindu Calendar, continuing for three consecutive days. As per the English calendar, it is the month of March. The festival heralds the arrival of Spring, the season of hope, and new beginnings. During the festival, all the towns, cities, and villages go merry-making. Men, women, and children including the elderly appear funny and ridiculous. The people spurt colors on one another. The festival is known as Dol Jatra or DolPurnima in Bengal and Shimoga in Maharashtra. On the eve of the festival, large bonfires are lit up with logs of wood, cow-dung cakes, ghee, honey, and the freshly brought new crop from the fields.

Dussehra or Durga Puja is a grand ten-day festival of the Hindus. It symbolizes the victory of good over evil. Huge effigies of Ravana, the wicked king, is set on fire to mark the defeat of Evil. People crowd around as the effigy explodes making them all cheerful. Images of Goddess Durga is installed and worshipped for four days before finally immersing it in the river. A long procession can be seen following as the idol is taken for immersion.

Diwali or the festival of lights falls after 21 days of Dussehra. It commemorates the arrival of Lord Rama to Ayodhya after 14 long years in exile. innumerable oil lamps and candles are lit in and around the houses. The night seems truly enchanting.

Eid is a grand festival of the Muslims. The festival marks the end of 30 days of fasting known as Ramadan. It is the time when the Muslims prepare themselves to be devotional and pious all year-round. They try not to deviate from the path that Allah has shown to them. They go to visit their near and dear ones after finishing the Id-prayer. Delicious dishes are prepared for the guests.

The festival of Janmashtami marks the birth anniversary of Lord Krishna. It is celebrated all over the country with great pomp and ceremony. Special Janmashtami celebrations can be witnessed in Mathura and Brindaban, where Lord Krishna spent his childhood days, are the special Janmashtami-celebration sites. During the festival, prayers are offered and religious hymns are chanted in temples. Various scenes from Lord Krishna’s life are also enacted.

Though Maha Shivratri is celebrated all over India, the true spirit of the festival can be best observed at Ujjain in Madhya Pradesh. The Shiv-lingam is worshipped with the accompaniment of all the religious rites and rituals. Devotees and worshippers keep fast all day and keep vigil throughout the night. At the end of the day, they break their fast, taking the ritual-bath to purify themselves to the depth of their souls. deep within. They wear new clothes and wash the Shivlingam with milk, observing other religious rituals.

The Saraswati Puja, also known as the Vasant Panchami is observed almost throughout the country. It holds a special significance in the state of West Bengal. GodessSaraswatisymbolises learning and wisdom. Idols of the goddess are installed in towns and cities. The ancient scripture ‘Padampurana’ depicts Goddess Saraswati as sitting on a white flowering Lotus, dressed in immaculate clothes with a white bead-studded necklace around the neck and holding a Vina.

Makara Sankranti is looked upon as the most auspicious day by the Hindus. Different states call it by different names- in the south it is Pongal, in Uttar Pradesh, it is Kichri, in Bundelkhand, and in Madhya Pradesh, it is called Sukarat or Sakara. It symbolizes the victory of Order over Chaos and Love over Hate. The tribals in the country light bonfires, dance, and eat their dishes. For them, it is the start of their New Year.

Poila Baisakh or the Bengali New Year falls on the first day of the month of Baisakh. The Bengalis sing and dance, play regional games, and fly kites. The festival marks prosperity, hopes, and new beginnings. With powdered rice, Rangoli (Colorful design) is drawn on the floors. The festival can be best observed in the state of West Bengal.

The ‘Must Attend’ Festivals in India

Art is an element that bonds us as a country and a society. One of the most awesome things about Indian winters is that there are many fests that fill our lives with good vibes.

Here are ten of the ‘Must-attend’ festivals for you to know more about. Let us know which ones you have attended or intend to! 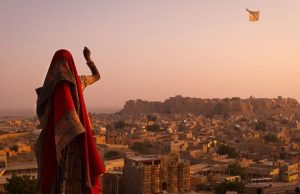 The desert. Music. Camping. And a life you don’t get to live the rest of the year. Yes, I am talking about Rajasthan. To be held in Jaisalmer from February 11 to 14 in 2016, the event also has open-air screenings, bonfires, hammocks, and an extensive range of activities. I know, this just keeps being too good to be true, but it is! True, I mean. If you want, you can park yourself in your car or you have the option of the dormitory or the tent. The ticket you buy would be a pass for the four days and will give you access to everything including the activities, workshops, music and everything else there is to offer!

Held in the beautiful and culturally rich state of Nagaland, the Hornbill Festival takes you close to the state and its roots. There is not one dull moment in the ten-day festival with so much to learn about the heritage of the Nagas. You get to enjoy the performances of traditional dance and music. The Hornbill Music Festival and the Hornbill International Rock Contest are the main attractions of this event which could possibly be the longest musical event in India. There is a contest between rock bands and you get to witness some excellent performances.

This festival is going on currently till the 10th of December, in Nagaland. If you have already missed it, you can prepare and pre-plan for the next year! More information is available at http://www.hornbillfestival.com/

Kolkata and music are synonymous with each other. For Kolkata residents, the year begins with an annual festival of Indian classical music at Nazrul Mancha and in 2016 it will be held from 22nd Jan to 25th Jan. The festival is more than 6 decades old, having made its humble beginning in 1952. The festival has been through changes over time, but the base i.e. music and its appreciators remains the same. What was started by a few music lovers on an impulse has become a ritual to begin the year with. Legendary musicians have performed on this stage, under the starlit winter sky and music lovers have witnessed the most beautiful musical extravaganza time and again. More information is available at http://www.doverlanemusicconference.org/ Winters in India begin with the Pushkar Camel Fair. Held in the month of November, this epic fair has thousands of camels, horses, and cattle, with lakhs of people visiting it. In 2016, it will be held from November 14 to 23.

You get to enjoy real Rajasthan, stay in camps, go hot air ballooning, enjoy horse safari, participate in a cycle tour to Pushkar, and do other activities. More information is available at www.pushkarcamelfair.com/

The Rann Utsav is an experience of a lifetime. A festival that goes on for over 90 days, the white Rann gets more than 2 lakh visitors from more than 20 different countries. Over the area of 5 lakh square meters, 350 tents are put up across 9 clusters. You’d be surprised to know that it takes more than two months to set up this tent city and about 15,000 tons of materials. Among places to visit, you have the famous Swaminarayan temple, Mandvi beach, Vijay Vilas Palace, the Aina Mahal, little Rann of Kutch, Mata No Madh, Banni Grasslands, Narayan Sarovar, Koteshwar Mandir, and Kala Dungar. It is currently being held from 18th Nov 2015 and will continue till 23rd Feb 2016. More information is available at http://www.rannutsav.com/ and www.rannutsav.net/

The world’s largest free literature festival is held every year at the Diggi Palace, Jaipur. In 2016, the dates for this festival are January 21 – 25. You can attend the event as a writer, a delegate, a speaker, or an enthusiast. The festival celebrates writers from across the world. The festival’s directors are writers William Dalrymple and Namita Gokhale. While some book lovers attend the festival primarily to get their books signed by their favorite authors, others attend to hear them speak. Dalrymple has promised the most astonishing line-up of speakers ever in 2016, so there is no reason why book lovers shouldn’t be packing up to attend this festival! More information and registration details are available at https://jaipurliteraturefestival.org/

It started in the year 1999 and since then has become a ritual with the sole objective of preserving the art and heritage district of south Mumbai. A hub of cultural activities, the Kala Ghoda Association has done a lot of work in restoring the heritage of south Mumbai including restoration of the garden in David Sassoon library, restoring the exteriors of the Cama Hall, upgrading the garden at Horniman Circle, etc. The festival committee is made of five people – Brinda Miller, Maneck Davar, Shirin Bharucha, Taran Khubchandani, and Geeta Castelino. The festival covers many sections including music, street stalls, children’s literature, heritage walks, dance, cinema, food, visual arts, theatre, and urban design. It will be held from February 6 to 14, 2016. More information on the festival is available at www.kalaghodaassociation.com/.

First started in 1986 at the Konark Natya Mandap by founder-director Guru Gangadhar Pradhan, the aim of this festival is to bring together as many artists under one roof as possible and create an international cultural family. Along with international performers, the festival has performers of Odissi, Kuchipudi, Manipuri, Mohiniattam and Bharatnatyam dance styles, amongst others. The festival is held from February 19 to 23, every year. Workshops are also held during these days and you have a lot to learn from, based on your interest. More information is available at www.konarkfestival.com/. A celebration of dance at a place most suitable. There is a lot of conjecture and curiosity associated with Khajuraho, along with the peace and solitude that the place provides. The Khajuraho Festival of Dances, held under the starlit sky of a place right out of the pages of Hindu mythology, is a treat for the eyes, the mind, and the heart. Entry to the festival is free and it is held from February 20 to 26, just when winter is about to give way to spring. 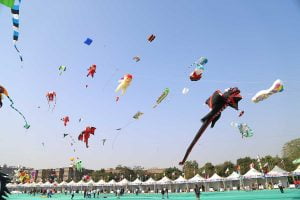 The International Kite Festival, or as we commonly know, Uttarayan, is celebrated on the 14th of January. Visitors come from all over the country as well as from countries like Canada, Brazil, Australia, France, China, etc. More information is available at http://ikf.gujarattourism.com/

Which of these festivals are you looking forward to? Tell us in the comments below and plan a trip with your friends!