The equation of food habit is changing all across the globe. With bacon, beef, and steak ruling the world, there are a wide lot of people who are switching to vegan dishes or even vegetarian dishes when it is the question of their itinerary.  Some of the countries across the globe are predominantly ruling the vegetarian market with their exclusive choices of dishes which they have to offer to interested vegetarian people. For the non-meat-eater, here are some exclusive streets foods dishes offered by the top five vegetarian countries of the world

Often regarded as the birthplace of vegetarianism, the fact is deeply rooted right into the culture and religion of the country ranking the lowest consumer of meat in the world. This is impressive especially for a country with a population of 1.252 billion people!

There are numerous thalis, Dosa in South India to Aloo Gobi and Dal Makhani in North with numerous options of vegetarian dishes to choose just for you. Well, these dishes are undoubtedly some of the best vegetarian dishes across the globe but here are some exclusive streets foods of India which find their way into a vegetarian’s plate.

This is a version of “Indian Burger” and is known to be the best popular street food in Mumbai. There are more than 50,000 stalls that offer Vada Pav so you can easily find this exclusive dish. Vada refers to a fritter of fried potato which is split into a bread bun. The sandwich is then seasoned with fragrant chilies, chaat masala as well as turmeric with peanut-garlic chutney.

Others In The List –Deep-fried Pani Puri is usually bread with chickpeas and then spiced mashed potato and then Bhel Puri which rice salad with tamarind sauce and samosas. 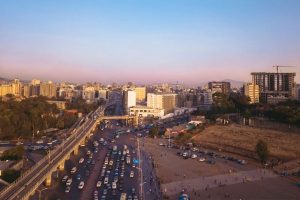 Right after India, another name that pops the list of Vegan countries is undoubtedly Ethiopia. One of the prime reasons is that there are many Ethiopians who belong to the Ethiopian Orthodox Church and they usually have meat-free Friday and Wednesday. To top that, there is usually a long period of fasting vegetarian. The culture of Ethiopia is very different as not only one get to eat with hands but there are undoubtedly usually prefer the same dish. The base and the staple food of every meal is Injera. There are also lentils, spinach, peas, beans, and cauliflower spiced with traditional Ethiopian berbere sauce. Now if you wish to delve into the street foods of Ethiopia, here come the best ones for you.

Now, this is a dish which you will get not on streets carts but instead in roadside restaurants. Misir Wot is known to be a spicy lentil stew that is served with Ethiopia’s signature injera bread. There are red lentils, onions made with local Berbere mixed with cardamom, cinnamon, fenugreek, and various other spices for making creamy dairy-free stew. Vegan dishes are especially easy to get on Wednesdays and Fridays in Ethiopia which are vegetarian days in the Ethiopian faith.

Others In The List: Ambasha, the lesser-known traditional bread which is sweet and cake-like and it surely goes perfectly with dark Ethiopian buna coffee.

There are undoubtedly various regional variations of halva but surely not every version of this sweet dish offers the irresistible balance of flakiness, smoothness, and intensity which Israeli halva does. There are various variations of this treatment which can be used as the base of tahini in which pure oil that pours from sesame seeds is ground between huge stone wheels. This thing is then sweetened and then cut into cakes which are then sliced. There are flavors that are as diverse as coconut, pistachio, almond, Belgian chocolate, and coffee.

Others In The List: Tamarind, almond, and pomegranate juice

In the Canadian provinces, there are various vegetarian and vegan restaurants with the maximum options being found in Ontario, British Columbia, Quebec, and Alberta.

Undoubtedly Toronto is the most multicultural city in the world and is surely the best place to eat. As a vegetarian who will dine out many times a week, you will never run out of delicious options for vegan means around the city. There are vegan options in each and every restaurant in Canada mostly for non-meat eaters.

As for vegans, it is very hard to think that North American street food as a classic or grilled veggie dog which is covered with hot peppers and mustard. There are many food carts in Toronto that serve up veggie dogs grilled right to perfection with toppings ranging from olives, canned mushrooms along with corn relish and Sriracha.

Others In The List: There are various vegan food trucks like Karma ChaMEALeon which will serve Buffalo Wingz and No Piggy Pulled Pork.

Vegetarianism is certainly not very common in Ghana just as it is uncommon in various developing countries. But is surely and certainly possible to be vegetarian in Ghana, you will just have to make some extra effort. There are many vegetarian foods that are available for volunteers. One can often order rice with vegetables and yams. In fact, there is a version of Pallava which does not have any meat or fish but make sure to confirm first. But save yourself as the streets foods of Ghana are surely a veggie’s delights.

The Street Food: Waakye with Spiced Plantains, Avocado, and Cassava

Try walking down any street in Ghana right after sunrise and you will find stalls that will sell bowls of rice and beans with men lining up for breakfast. The rice Waakye is sticky rice which is cooked with beans and sorghum leaves giving a sticky texture. The locals love this dish for the delicious taste which is topped with crispy spiced plantains, fresh-cut avocado, and cassava shavings which are called gari.

Others In the List:  Another delicious dish is roasted yams and plantains which are smothered in groundnut paste.

So all you veggies out there, it is time to delve into some of the exclusive delicious vegan dishes offering your taste buds a soothing taste and feel.