Most visiting Forts of Rajasthan

Weaving your way through the deserts and scrublands, observing bristly meadows of bajra, trudging walk of camels slurping water from mangers, clinking silver jewelry, beaming sun rays– everything will remind you of the royal charm and luxury of the erstwhile Rajput civilization that bears it stamp on the awe-inspiring forts and splendid palaces. The architectural grandeur of the Rajasthan’s forts and palaces will transport you to an altogether majestic world. The experience is so sublime that it conjures up images of the bygone era of the great kings and queens.

Situated on high hilltops and amidst the vast expanse of the desert, the forts, and palaces of Rajasthan exhibit unique own charisma and opulence. Offering a majestic union of royal past and modern comforts, the state unfolds royalty and splendor in every sphere of life. 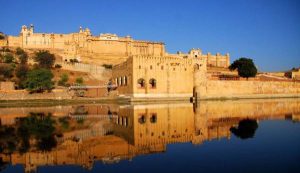 Situated in the town of Amber, the fort palace belonged to the Kachhawaha citadel until 1727 when the capital became a part of Jaipur. Crowning the top hill, the beautiful palace was built using marble and sandstone. This architectural wonder brilliantly showcases the layout in four levels, Diwan-i-Khas, Diwan-i-Aam, Sheesh Mahal, and Sukh Niwas with each of them making way for their separate courtyards. Scrupulous artworks of frescoes and murals, great artistic mirror work, paintings, and delicately etched-out carvings. The real attraction for the visitors is its enthralling royal ride up to the fort on an elephant. Nestled in the forest of Ranthambore National Park, this renowned world heritage site was constructed by the Chauhans during the 8th century. Blanketed by the lush greenery of the Ranthambore Park, the fort is known worldwide for the three Hindu temples dedicated to Shiva, Ganesha, and Ramlalji. Interestingly, the fort which was once used as the hunting ground for the Jaipur Maharajas now recounts the royal stories in Rajasthan. The Gupt Ganga stream, on the other hand, flowing throughout the year offers a breathtaking view of the exquisite Ranthambore National Park.

The Mehrangarh Fort is arguably the grandest of all forts in Jodhpur, perhaps even Rajasthan. Situated on a 125m high rock, this majestic monument creates the perfect contrast between stunningly delicate interior design and the robust and imposing exterior thanks to its location. The fort was founded by Rao Jodha in the year 1459, with numerous additions being made to the fort by the rulers that followed. Today, the Mehrangarh Fort is also home to a magnificent museum, which offers a chance to visitors to experience the grandeur and charm of the days gone by.

Constructed by Rai Singh, the third ruler of Bikaner, this fort adorns the marvelous landscape of the Thar Desert. The most astounding features of this sandstone master class include 37 exquisitely decorated palaces, pavilions, and temples, reminiscent of the culture and religion of the regal days. This fort stands as one of the very few forts across India to have remained unconquered, thanks largely to the 980m long wall with 37 bastions, a mot, and the unforgiving terrain of the Thar Desert.

One of the most important parts of the legend is the Rajputana culture, bravery, and romance, the Chittorgarh Fort sprawls across an area of 692 acres on the top of a 180m high hill. This fort has a special place in history, being witness to numerous hard-fought battles and episodes of unparalleled bravery of the Rajputs in the face of generations of invaders. Abandoned after the third siege carried out by Emperor Akbar in the year 1567, this majestic monument is a World Heritage Site and a landmark in a history laced with courage, chivalry, and the death before dishonor associated with the Rajputs.

The second most important fort in the Mewar region after Chittorgarh, the Kumbalgarh Fort was built by Rana Kumbha in the 15th Century. The fort was further enlarged over the years till the 19th century by the successive rulers. Like most of the forts in Rajasthan, this fort too is made on a hilltop of Aravali Range 1100m above sea level. Kumbalgarh Fort is also famous for being the Maharana Pratap, the legendary warrior king of Mewar. Sprawled over 22 miles, this fort is home to 360 temples, 300 of them being Jain temples and the rest Hindu temples. The fort is open to the general public and the visitors get a chance to experience the unique beauty of the fort as it is lit spectacularly every evening for a few minutes. In the year 2013, the Kumbalgarh Fort was included in the list of World Heritage Sites.

Built by Maharwal Jaiswal in the year 1156, the Jaisalmer Fort stands on the peak of the 80m high Trikuta Hill. The majestic architectural and constructional beauty of the fort is enhanced multifold by the grandeur of the gleaming sands of the Thar Desert, which surrounds the fort. The 99 bastions across the fort make for a truly splendid sight for all visitors. During medieval times, the entire population of Jaisalmer is known to have lived in this fort. Thousands of people live within the fort to this day, which makes the Jaisalmer Fort the only fort in India where people reside.