A lot of visitors to the UK only stay in the cities, sometimes only London, and if they do see anything else it is often from a train or coach window. If you want to see a different side of England, Scotland or Wales then get outfoot on some of these great hiking trails.

These top ten trails are chosen for a mixture of the landscapes they take in, famous natural beauty spots, and the range of interesting villages, towns, and cities they pass through or close to.

Whether you walk them for an hour or a week these hiking trails have a lot to offer and you can enjoy them at your own pace. With some of these they are also open to mountain bikers if you want to cover more ground; for those in less of a hurry almost every village you come to will have some old building to photograph and pub or tearooms to refresh yourselves in. 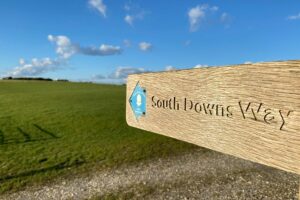 Not far south of London, walking the south downs way is a great way to get away from it all though also ideal if you are visiting the south coast and want to take in towns and cities like Eastbourne, Lewes, Brighton, and Winchester along the way.

There are also plenty of charming villages along the way almost all with a good pub and often tearooms as well if you fancy lighter refreshments. The downs are rolling hills and apart from a few flood plains in the valleys, you will normally be heading up and down through the South Downs Way avoiding any very steep hills.

The trail runs from Winchester in Wilshire through Hampshire and into Sussex going close to Brighton before ending in Eastbourne it is just before getting to Eastbourne you will pass over the cliff top at Seven Sisters and up to Beachy Head for some stunning views. The Dartmoor Way actually has a cycle route and a hiking route which runs separately for most of the way meaning as a walker you won’t have to watch out for fast-approaching bikes.

The Dartmoor Way long-distance path actually is a circuit; most of the time close to the edges of the national park making it easy to access. Having said this some of the areas you pass through will seem totally desolate and cut off but stunningly beautiful at the same time. You also get to enjoy some of Dartmoor’s most charming towns and villages on the route including Bovey Tracey, Okehampton, Ashburton, and Princetown with its famous prison. If you are looking to walk the Scottish Highlands we highly recommend the Cateran trail. Mainly in Perthshire, the trail takes in the stunning Mount Blair and the trail is another to go in a loop, though with a branch going to Blairgowrie. Blairgowrie is a good place to start from, either there or in Alyth: a charming village on the river Isla that the trail later follows. 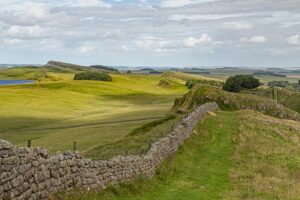 Hadrian’s Wall is a great trail for history fans but also those who like a walk in great green, unspoiled countryside. The trail follows Hadrian’s wall where possible and the remaining buildings including garrisons are especially interesting: still in remarkable condition. The history of this area goes far beyond the Roman Times of course to the times when the English and Scottish border moved back and forth on a regular basis. Today the entire trail is in England and crosses right across from Bowness on Solway in the west to Newcastle on the east coast taking in Carlisle along the way. The Pennine Way is one of the UK’s longest hiking trails and is in fact a massive 268 miles running along the ridge of hills that cut northern England in half.

Starting down in the Peak District where the midlands end and the north begins the path goes through several different national parks and different landscapes including the Yorkshire Dales, Lake District, and Northumberland National Park. The Thames Path, along with the South Downs and the Cotswolds Way, is popular for those in London to get away to at the weekend; if you are visiting London and want to see some of the English Countryside and some traditional English Villages too then heading along the Thames Path is ideal.

The path follows the Thames and if heading out from London you can start from right down at the estuary at Greenwich and take in more of London. Alternatively, you could take the London Underground out to somewhere such as Richmond and start from there, meaning you get out into the countryside more quickly.

Heading over the North Wessex Downs after Reading and going all the way to the Thames’ source in the Cotswolds there are some steeper sections but plenty of flat walking too for those not so keen on hill climbs. The Thames Path doesn’t quite reach the Cotswolds Way but there are footpaths you can take to continue to this trail that though not far from London and the M4 Corridor feels like a different world.

At either end of the trail you have places worth visiting in their own right; at one end is Bath with its fantastic Georgian Architecture and Roman Baths, as well as great shopping. At the Northern End is Chipping Camden: a small market town that has remained unspoiled with its limestone buildings of a beautiful yellow hue including the 17th-century Market Hall. 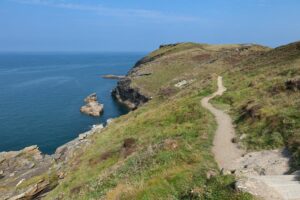 Another very long hiking trail, many people attempt the South West Coast Path in parts: getting down to the West Country for odd weeks and weekends over a year or more; this perhaps demonstrates that this is a path that you won’t easily get bored of as you see the landscape change.

There is always a photo opportunity along the way but places like Durdle Door, Land’s End, and Lulworth Cove are spots you will want to stop and admire for some time.  There are some great little towns along the way as well, that you may decide to come back to for a longer stay another time, such as St Ives, Clovelly, Tintagel, and Lyme Regis. 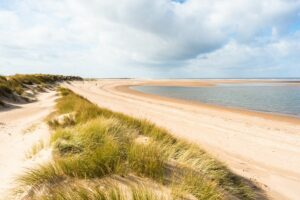 The Peddler’s way part of this trail leads up through the flat countryside of Norfolk to the coast following a Roman Road: this means a very flat and very straight route but don’t be mistaken in thinking that this makes it in any way boring. The countryside is beautiful and you can often see nothing but grassland, marsh, and farms as far as the eye can see.

Once you get to the coast the Norfolk Coast path leads along the north coast of Norfolk from Holme-next-to-the-Sea to Cromer. Soon to be joined to a coast path that will go right around the Welsh coast the Pembrokeshire coast path itself is 186 miles long and will probably remain the most beautiful part of the path: but also quite possibly the least used being in a remote, sparsely populated part of Wales.

Along the way, you will pass fantastic sandy beaches and traditional Welsh fishing villages. At the same time, there are a lot of cliffs as well and some steep ascents and descents so allow plenty of time and don’t get caught out being far from your destination at the end of a day’s walking.

This top ten list of trails includes some of the best-known and longer paths but right across the UK there are plenty of less frequented paths that shouldn’t be ignored. Often shorter these paths can often get you where you want to be using a number of different footpaths and if you are in an area for some time an Ordnance Survey map is a great investment to plan routes.