Kerala, often known as God’s Own Country, is a mystery-laden state that holds to its bosom several historical monuments that narrate sagas of a rich past, that was both glorious, and bloody at the same time. The many rulers who rules over this state, at different times of the timeline, built monuments, sometimes as a mark of victory, sometimes to protect their kingdom, and at times, just to establish their power and victory. What so ever may be the case, these expeditions by the royalty have led to the formation of eye-catching beauty that appeases all and sundry of the present generations and many more to follow.

Mattancherry Palace or Dutch Palace, located in Kochi is one such monument that holds tremendous relevance in the historical context. This monument of yesteryears has a rather complicated past. The Dutch and the Portuguese are both attributed for the construction and eventual restoration and beautification of the building respectively. The murals inscribed on the walls grab all attention, and surpass the rest of the details on the ceilings, doors, or elsewhere in the building. The place is also a hub of ancient paintings. It has been standing tall since 1555 AD. It is a two-story building in which both the floors are connected by a flight of stairs. It also houses a small temple within. 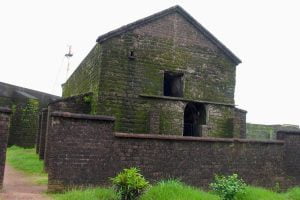 Don Francesco de Almeida facilitated the construction of this ancient for in the year 1505. It is located in close proximity to Kannur. One can have a jaw-dropping view from the fort, at the marvel of an island and a bay which surround the fort. The fort has stood the test of time when there were several attacks and invasions that were hurled upon it. It also saw several changes in the rulers who gained its ownership at different points in history. The monument depicts several styles of Portuguese and European styles of architecture. A visit to Kerala is certainly incomplete without paying a visit to this ancient palace. One of the biggest examples of Kerala’s style of architecture is represented in this mighty piece of excellence. It is situated near Alappuzhain around 1700. It is a protected monument that sufficiently exhibits tremendous rich and authentic Keralite design and architecture. The building overlooks in front of it, a pond which in itself is a rarity. This palace is an asset to the beautiful place of Kayamkulam and was built in the 18th century. The place houses several mural paintings and also has a museum that displays the artefacts of an era long gone by. Situated in Fort Kochi, there stands an abode of beauty. Originally built as a residence for the Portuguese Governor, this piece of architecture is a head-turner. The building shows off a Gothic style of design and its splendor of it is further accentuated by the presence of a garden, spread widely before it. The Indo-Portuguese museum close to the Bishop’s House is also a rich source of historical monuments and articles that speak of a rich past. 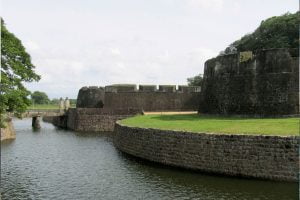 Palakkad Fort is also known as Palghat Fort. This fort, like many other monuments and buildings in India, is a perfect blend of Indian and European styles of architecture. The fort is believed to have been built for King Hyder Ali. Needless to say, this fort, like many others has seen several blatant fights of the powerhouses in the long history that India has to her credit. The place is gorgeous with a huge field in its vicinity and the impeccable style in which it has been built. The fort is also popularly known as Tipu’s Fort.