Hyderabad is the capital and largest city of the Indian state of Telangana. It is located on the banks of the Musi River in southern India. The city has a rich history, dating back to the 16th century when it was founded by Muhammad Quli Qutb Shah. It was later ruled by the Nizams, who made it one of the wealthiest princely states in British India. Today, Hyderabad is known for its historical landmarks, such as the Charminar and the Qutb Shahi tombs, as well as its rich culture and cuisine. The city is also a major center for the technology industry, with many IT and biotechnology companies based there.

The Charminar is a 16th-century mosque located in the old city of Hyderabad. It is one of the most iconic landmarks of the city and is considered a symbol of Hyderabad’s rich history and culture. The mosque is built with granite and lime mortar and is adorned with intricate carvings and arches. The four minarets, each measuring 48.7 meters in height, offer a panoramic view of the city. It’s also a great place to explore the local bazaars and tries traditional street food. The Salar Jung Museum is one of the most important museums in Hyderabad. It houses a vast collection of art and artifacts from around the world, including sculptures, paintings, textiles, manuscripts, and decorative arts. The museum has a collection of over 43,000 art objects, including works by famous Indian and European artists. It is a great place to learn about the history and culture of different civilizations. The Chowmahalla Palace is a palace that was once the residence of the Nizams of Hyderabad. The palace complex comprises of several buildings and courtyards and is known for its impressive architecture and intricate carvings. The palace also has a collection of rare manuscripts, paintings, and other artifacts that belonged to the Nizams. Visitors can also see the palace’s grand Durbar Hall, which was used for holding royal ceremonies and meetings. 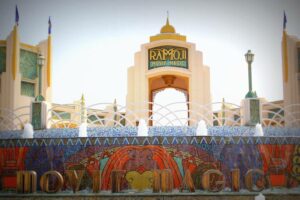 Ramoji Film City is a film studio and theme park located on the outskirts of Hyderabad. It is the largest film studio in the world and is a popular tourist destination. Visitors can take a tour of the studio and see where famous Indian movies and TV shows are filmed. The theme park has a variety of attractions, including rides, shows, and activities. It’s a great place to have fun and experience the world of Indian cinema.

Here are four more popular tourist attractions in Hyderabad that you may want to consider visiting: