Kurukshetra is famously known as a battlefield, it is a place of religious and historical importance located in the state of Haryana, India. According to history, the place is of unique importance for the war between Pandavas and Kauravas. The name Kurukshetra is derived from kuru. Lord Krishna gives the theory of karma to his friend Arjuna. This led to the birth of the Hindu religion and culture which describes Hindu devotees all over the world.

Thanesar or thanes war is a popular and historical town situated near the newly made Kurukshetra city. In thanes, one can visit the Krishna museum which displays different kinds of items for the public view. Thanesar got their name from the Sthaneshwar means to be the Place of God. There is a landmark that represents the Kurukshetra known as thanes. By walking on the way of thanes one can find the statue of Maharana Pratap and the holiest tank of Kurukshetra. The temple named thanes war Mahadev temple is located in this place, locals in this pace believe that it is the oldest temple, a primary deity in the temple is lord shiva. By walking on the way to thanes one can find the Kurukshetra University and three old temples and bathing ghats.

Things to see and do:

Twin tanks are constructed to preserve water hence they are named Brahma Sarovar and sannihit Sarovar. According to history, Brahma Sarovar got the name because Lord Brahma did his first yagna in this place and this tank is filled with fresh water from the Yamuna canal. During a solar eclipse, the lakhs of people do converge at this place because of their religious beliefs. On Amavasya the people bath in sannihit Sarovar according to the religious beliefs which absolve one of all sins. The twin tanks’ surroundings are cleans and green with beautiful climatic conditions. During the Kumbha Mela season, the Sarovar is gathered by a large number of devotees for converging. 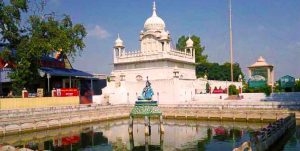 The temple is visited by a large number of devotees every year, the temple is dedicated to Lord Shiva. According to the history inscriptions, the place is a landmark for Pandavas where they prayed after victory in the battle of Mahabharata. The temple architecture is extraordinary which represents a dome-shaped roof that displays local architecture. On the top of the temple, one can view a tall pinnacle, the temple represents a whitish look with a cool and pleasant climate.

The Pandavas has a close connection with the Bhadra kali temple because they performed their rituals before their final war against Kauravas. So the temple got huge attraction from devotees who come from all around the world. During Navaratri season the temple is gathered by a large number of devotees while they perform poojas and rituals also the temple is beautifully decorated with flowers regularly also on festival days. The temple is constructed with red stone which represents very good luck for the devotees.

Krishna museum is opened to the public in the year 1987. The museum represents the personality of Lord Krishna which also represents the various items and artifacts between the 1st to 11th centuries. The whole museum displays the Hindu religious culture and tradition. The museum displays items brought from all over India. The items such as woodcarvings, miniature paintings, stone sculptures, leaf etchings, etc are found in this museum.

Where to stay and eat:

The hotels offer luxurious facilities such as 24 hours communication facilities and for a cheaper price one can visit dharma shala which provides good rooms for a cheaper price.
The hotels such as parakeet have a restaurant that provides healthy food of all Indian and continental dishes. Bikaner sweets are famous in this place so tourists can also taste sweet in this place.

How to reach Kurukshetra: