Kuttanad is a place that covers the region of Kottayam and Alappuzha district in Kerala, the Indian state that is famous for geographical peculiarities and paddy fields. The place holds the lowest altitude within all over India. The main occupation is farming that is done a few feet below sea level. Kuttanad is basically known for growing highest amount of rice in the state. The four major rivers of Kerala that is Meenachil, Pamba, Manimala and Achankovil flow into this place. The popular activity done is boat race in Punnamada Backwaters, which is known as Vallam Kali in Malayalam. The region of Kuttanad has been divided into three categories, Lower, Upper and North Kuttanad. Among these three regions the upper Kuttanad comprises of highest number of cities and villages. However people find all the three regions interesting for visiting. Kuttanad is located among the largest lake in Kerala, the Vembanad Lake which is beatified by leaning palm trees.  The place is still untouched by crowd and is away from the busy life of the modern people. The serene backwaters and the view of the Kavanar River make up most of the region. All required information is provided below on Kuttanad tourist places. 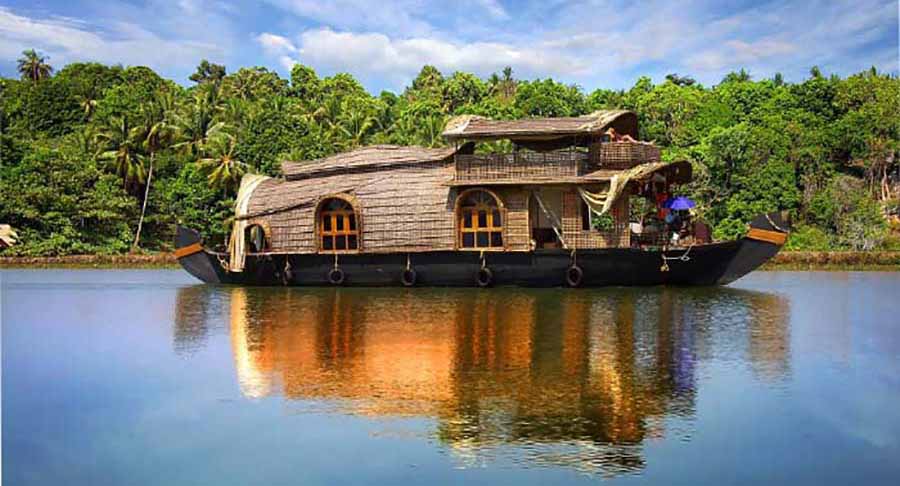 The fresh water lakes and the backwaters are the most explored places by the tourist from all over the country. Hundreds of houseboats are seen moving on the slow rivers, and still waters of the lakes are complimented with the life of the people living along the shore which is something that differs from any other state of the country.

The interior of the boat is no less alluring than the exterior view. The chefs wear numbers of feathers on their head to make a difference and the food they offer are just delicious with dishes that comprises varieties of fish. The drink they offer is known as toddy that goes well with the delicious Karimeen (made curry or fries) which is a fish species with pearl like spots on their body. Tapioca is another favourite dish of the region. Toddy is an awarded drink which is named as “State drink”. The combination of coconut grating, chilly and salt is known as Chammanthi that is used on various dishes to increase the flavour. So it is recommended to stay in houseboat for at least one time and you should never miss. This place is of historical importance that hosts an Idol of Buddha, which is well known for its historical value telling the story of Bygone Buddhist Era. It is a place located at a distance of about 56 kilometers from Kuttanad. This is a religious place and also a resort. It houses an original light beacon that has been preserved since 250 years. Being a holy shrine, lots of devotees gather here to pray. This is only place where the blessed Kuriakose Elias Chavara was born.

This is a famous temple situated at a distance of 22 kms from Kuttanad. It is an ancient temple which is 3000 years old as believed. The deity worshiped here is mother Goddess who is known to be powerful and a part of Lord Shiva.

How to reach Kuttanad

The nearby railway stations are Alappuzha and Changanacherry. The nearby airport is Cochin International Airport and you can also get there from Thiruvanthapuram Airport which is 150 kilometres towards south. You can also reach by boat from station. The boat services are frequently available along the route Alappuzha- Edathua- Ambalappuzha. Other than these buses and cars are available from Alappuzha.

Summers in Kottayam are hot, with much humidity in the air making your journey uncomfortable. So the best time to visit there is the time between the months of October to March.

The things that boost the beauty of Kuttanad tourist places are the cultural heritage and the emerald backwaters. Kuttanad is also known as the rice bowl of the state and comes within the district of Alappuzha. Being the lowest region in the country, tourists find this place an incredible spot to explore due to its lust beauty and home to Kerala backwaters.