Margao is one of the well-known cities in Goa. It is a bustling city that is recognized as the commercial and cultural capital of Goa. Replete with unique and interesting tourist attractions the place ensures a fun and memorable vacation. Visit the city on your next vacation and pick from the best hotels in Margao.

Margao or Madgaon is largely recognized as the cultural and commercial capital of Goa. Presently, it is one of the largest cities in the state and a prime access point to the popular destinations of south Goa. Like the rest of the state, it is hugely impacted by the Portuguese colonization which ruled the province for nearly 500 years. It still retains the old churches, villas, convents, monuments, and a network of interesting streets. It is one of the places in the region that were the sites of erstwhile human settlements and before the arrival of Europeans it was a major Hindu temple town. Records state that there were nine highly revered Hindu shrines that were later destroyed by the Portuguese. Additionally. There is a large market where one can find anything and everything. It is believed that the place derives its name based on the market as Madgaon is the distortion of maud-gao which signifies the “market city of Goa”.

Since it is the largest city close to the beach destinations and popular tourist places of South Goa and is also the main gateway to access the tourist sites there is a continuous influx of tourists year long. In fact, many consider making their stay at one of the hotels in Margao as there are more good lodging options and then visit the nearby sightseeing spots. Additionally, the city in itself is home to some interesting attractions and allures. For the culture buffs, the place is simply a must-visit. It is arguably the most ideal place to explore and experience the rich east meets the west culture of Goa. The place is full of art galleries, cultural centers, churches, heritage sites, etc. Before you head out to the popular destinations in South Goa it is ideal to spend some time in the city and explore its attractions. Three prominent tourist attractions that are simply not to be missed include: 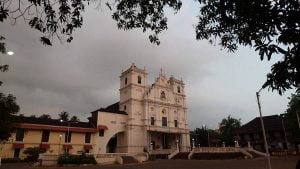 It is an imposing structure, one of the finest examples of ancient Baroque architecture style, and is a prime landmark in the city. It is dedicated to the Immaculate Conception of Mary, St Peter, and St. Michael. The present existing church was built in 1645 replacing the original one that was built in 1564. It is simply a treat to the eyes and a highly revered one.

Housing a large collection of over 4000 artifacts the Goa Chitra Museum provides a detailed insight into Goa’s checkered past and the evolution of the state. It is based in Benaulim and just a few hour’s drive from the city. The collection includes farming tools, pottery, musical instruments, carts, etc. Apart from that it also houses an organic farm exhibiting the cultivation of herbs, rice, vegetables, spices, and sugar cane.

The only beach in South Goa that has the feel of beaches in North Goa, Colva Beach is one of the most popular beaches in the state. It is filled with hotels, restaurants, and shacks offering multiple options to rejuvenate. Besides, it is a spectacle of sand, sea, and sky weaving a magical spell that keeps tourists wanting to visit the place again and again.

Simply visit Margao during your next vacation and spend a fun-filled holiday. Good thing is that getting into the city is easy. Simply book your train tickets in advance, check the running status of trains, and head to the city for a fun holiday.