Paris France is a city that needs no introduction a city is the global center of art, food, and romance, and is a dream destination for many around the world. A visit to Paris is an experience like no other, taking in the artistic treasures inside the Louvre, the breathtaking gothic architecture of Notre Dame, and overlooking it all the iconic Eiffel Tower.

After taking in the ‘big hitters’, many visitors explore the famous neighborhoods, such as the infamous bohemian area of Montmartre, home of the Basilica of Sacre-Coeur and the Moulin Rouge. Paris is a city of many guises, being a huge center for art, music, literature, philosophy, fine food, and fashion. There’s no other city quite like it!

The Tour Eiffel is an unmissable sight. The most photographed structure in the world, it can be viewed from many spots in the city. It is also open to visitors all year, with tours running till midnight in the summer. The top of the tower has incredible panoramic views of one of the world’s most beautiful cities, and there is also a reasonably priced restaurant and a chic champagne bar, perfect for couples. Tours run in many languages and you will learn the unique history of the tower. The tower is even more spectacular at night, a shining beacon in the city of lights.

Unfortunately, it would take a week to view the Louvre properly. Most visitors only reserve a morning or afternoon to visit, and most visitors go straight to the art wing. There is a huge collection of archaeological treasures, but many will go straight to Da Vinci’s Mona Lisa and the Venus de Milo, the two blockbuster attractions in the museum. “Liberty Leading the People”, the most famous image from the French Revolution, is another popular piece, and an important relic of the history of France. Be prepared for crowds and keep an open eye for pickpockets, and experience the largest and most beautiful museum in the world. One of the must-visit museums in the world. Home to the artistic and classical treasure of France, Musee d’Orsay is connected to the Louvre by a bridge. The rooms of the museums on three floors are full of impressionist as well as post-impressionist art wonders including painting, sculpture, photography and decorative objects. The collection of the Musee d’Orsay spans from neoclassicism to romanticism, impressionism and expressionism. Travel to Paris is incomplete without a visit to Notre Dame Cathedral, just as travel to Europe lacks excitement without a visit to Paris. Gothic architecture of magnificence, Notre Dame Cathedral is counted among the most beautiful cathedrals in Europe. The dramatic towers, spires, and stained glasses of this marvelous gothic architecture are awe-inspiring. Once the beating heart of medieval Paris, it is an appealing attraction braving the odds of time. 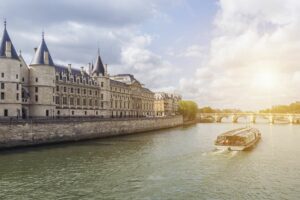 A boat tour of Paris gives glimpses into the city’s romantic beauty and mythical wonder. It is an unforgettable experience to have a romantic dinner on the water of the Seine river and breathe in the fresh air. A boat ride on the canals and waterways around Paris is a never-to-be-missed opportunity to explore the landscaped beauty of the city’s countryside. The pleasure of traveling to Paris is dull without this watery entertainment. A must-visit for photographers and art connoisseurs, this tourist attraction of Paris boasts the Montmartre Photo Gallery. The Sacre Coeur with a gigantic white dome is located at the city’s highest point, the Montmartre knoll. Consecrated in 1909, this architecture is famous for its dramatic terrace and gold mosaic interiors. The terrace of the basilica offers sweeping and stunning views of the city on a sunny day. Montmartre where the Sacre Coeur is located is a poetry-drenched spot on the landscape of Paris. 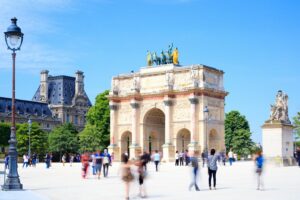 A symbol of Parisian glory and grandeur, elegance, and extravaganza, the Arc de Triomphe is a 164-foot-tall architecture. It was built by the emperor Napoleon to commemorate the military prowess of France in 1806. The beautiful sculptures of the Arc de Triomphe are reflective of the triumph of Napoleon’s soldiers and generals. It crowns the city’s grandiose avenue Champs-ElysÃƒÂ©es on the west end. One of the oldest constructions with historical significance in the French capital city. Named ‘Pont Neuf’ by King Henry IV, the bridge got recognized as a prominent landmark of Paris the day when the statue of Henry IV was officially unveiled in 1607. The bridge with sweeping pavements soon came to be a meeting place for Parisians. Ideal for socializing, the Pont Neuf has twelve arches. Illumined with lights, the bridge looks illustrious in the dark. 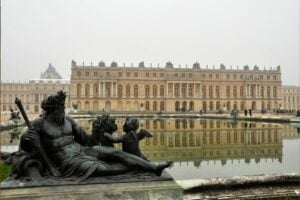 A living embodiment of the French extravaganza. The beauty of Versailles Palace is spectacular and stunning. The area with sweeping greenery around the palace is to be strolled in leisure. At present, much of the interior of the palace is open to visitors. A 20km drive from the center of Paris, the Versailles Palace is full of attractions, one of which is the Hall of Mirrors, a remarkable contribution by Louis XIV. A wonderful wonder of Paris to admire. The interior of the Palais Royal is not open for public visit. The courtyard as well as the garden surrounding the mammoth edifice can be visited. The outside of this French palace spells marvels to stun the onlookers. It is an escape to the solitude of serenity from the bustling center of the city. There are galleries with exhibitions and restaurants for gastronomic refreshment inside the premises.

Things to Do in Paris France

If there is something Paris does right, it’s food. Food is France’s finest export, and the great part is there is incredible food available for every budget. A plate of duck rillettes and a glass of fine champagne at a Michelin Star restaurant by the Seine will be just as spectacular as a hunk of fresh bread and local cheese paired with a decent glass of red at a neighborhood Bistro.

Paris has fantastic public transport and is a good city for walking, but the best way to see the historic city is by exploring the Seine river. Boat trips curve around its many meanders, which will give you a sense of the cities’ geography, heritage, and romance. The river is dotted with beautiful bridges and borders some of Paris’s most famous sights, including the Notre Dame cathedral, home of the infamous hunchback.

Paris sees millions of visitors every year, and there is a vast range of hotels, hostels, and apartments available for any budget. Honeymooners won’t go wrong with the Le Meurice Hotel, a former palace that is now the ultimate five-star experience, complete with views of the Eiffel Tower, a spa, and beautiful, classically decorated rooms.

Budget travelers will find plenty of hostels in central Paris, including the lovely Peach & Love Hostel or the Le Regent Montmartre, which has a spectacular location at a reasonable price.