Andhra Pradesh is located on the southern eastern coast of India. It is the seventh-largest state in the country. Andhra Pradesh will give you unforgettable memories, for your life. It is such a nice place that, it is known as Koh-I-Nor of India. You will get to see everything like caves, hills, wildlife Sanctuaries, forests, temples, beaches, forts, and many other things. There is a presence of rich climate, which is good for many crops like rice, pulses, chilly, cotton, gram, etc. There are many pharmaceutical manufacturing hubs. The rich culture, heritage sites, ancient temples, and architectural forts have made Andhra Pradesh one of the top tourist destinations to visit in India.  Places to visit in Andhra Pradesh: Visakhapatnam is the largest city of Andhra Pradesh. It is the financial capital of the state. Andhra Pradesh is also called as, The City of Density, The Jewel City of the East Coast, and the Goa of the East Coast. It is the 100 fastest growing city in the world. There is every necessary attraction like hilltops, beaches, wildlife sanctuaries, valleys, forts, temples, and many other things that make it a top destination for Andhra Tourism. It is a beautiful picturesque spot, for all types of tourists. Places to visit in Visakhapatnam are:

Nellore is located at the bank of the river Penna. It is situated on NH5 i.e. Chennai Kolkata Highway, which is the main part of the Golden Quadrilateral Expressway Project. Nellore is close to the sea, and because of that the land is fertile and mainly used for agriculture. The people of this city are mainly engaged in Aquaculture and farming of Paddy. Nellore is very famous for the production of mica and gold jewelry. In ancient times, this city was ruled by many dynasties like Chola, Mauryas, Pallava, and many more. Places to visit in Nellore are: Tirupati is also known as the Spiritual Capital of Andhra Pradesh, because of the famous spiritual pilgrimage spot, i.e. Tirumala Venkateswara Temple. This temple is situated at the foothills of Tirumala Hills. Every day around 50,000 people are visiting this place. The temple is mainly decorated with flowers and the temple is plated with gold. It is the best and very famous ‘AP tourism site and has also been named the Best Heritage City. The temple of Tirupati is the richest temple in India. Places to visit in Tirupati are: Chittoor is situated at the banks of the Ponnai River. The city is mainly engaged in agricultural products like mango, tamarind, sugarcane, jaggery, and many other products. The town has various hills, waterfalls, and ancient temples, which make it a place of tourism in Andhra Pradesh. Chittoor is very famous for its rich history and scriptures. It is also known as Mango City, because of the wide production of a variety of Mangoes. Places to visit in Chittoor are: Kadapa is also known as Kadapa, because it is the gateway to Tirumala hills, in the west. There are various ancient kingdoms ruling Kadapa like, the Kingdom of Mysore, the Nizams, Cholas, and many more. The town is very famous for its glamorous Dravidian style of architecture. There is known as the Bellum cave, which is the longest cave of the Indian Subcontinent. Kadapa is also famous for its spicy food. All these things make the Kadapa a famous pilgrimage spot of Andhra Tourism. Places to visit In Kadapa are:

Vijayawada is the third largest city of Andhra Pradesh. It was earlier known as Bezawada. The city is also known as The Business Capital of Andhra Pradesh, because of the major spot of business and trading in the state. It is situated at the banks of the river Krishna. This city was recognized as the Global Future City by McKinsey. There you get to see varieties of animals like wild dogs, wolves, leopards, jackals, etc. Vijayawada is a rich cultural and heritage site of AP tourism, having various ancient temples, caves, rivers, monuments, and many other sites. Places to visit in Vijayawada are:

Ongole is famous for its special breed of oxen, known as the Ongole Gitta. It is a famous Zebu cattle breed. There are various ancient Hindu temples. Ongole has major beaches, which are providing special water sports facilities. The city has major tobacco trading in Andhra Pradesh and is also famous for its small business industries. Places to visit in Ongole are: Kurnool is the oldest capital of Andhra Pradesh. It is also known as Kandenapalli or the city of Kadena. The city is situated in the western central part of Andhra Pradesh. Kurnool has a rich history and it is a multicultural society. The town is very famous for its rock paintings. There are many interesting and historic things to see in Kurnool, which makes it the best historic place of ‘Andhra tourism’. Places to visit in Kurnool are: 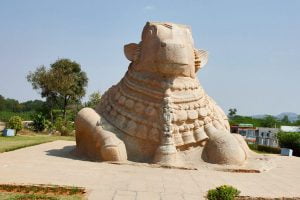 Anantpur is the largest district of Andhra Pradesh. It is not a well-known place. Anantpur has a large diamond mining industry. There is a tree in Anantapur which is one of the largest banana trees in the world, the tree was of Thimmamma Merriman. That tree was covering an area of around 2.7 acres. Agriculture is mainly done by the people of Anantapur, crops like chili, maize, and cotton are grown here. Places to visit in Anantapur are:

Puttaparthi is situated on the banks of river Chitravathi. It is the birthplace of Shri Sathya Sai Baba. The town is surrounded by arid and rocky hills which mainly bordering Karnataka. This place is known globally, because of its religious importance. This town does not have much natural scenic beauty, but it offers you a modern approach toward religion. Puttaparthi is a small village, having urban facilities. Places to visit in Puttaparthi are: