Cambodia is a country – or kingdom, rather – located in Southeast Asia. It is bordered by Laos, Vietnam, Thailand, and the Gulf of Thailand. The Kingdom of Cambodia covers about 70,000 square miles and is home to 15 million residents. There is a range of nationalities living in Cambodia, including Chinese, Vietnamese, and about 30 various tribal groups. Cambodia sits in a tropical climate and its topography is somewhat like a bowl. The interior of the country is a flat central plain that is surrounded by hills and small mountains on the outer fringes.

Although Cambodia enjoys warm temperatures ranging from 70 degrees to 95 degrees year-round, it also has a monsoon season. Cambodia’s rainy season runs from May through October when the temperatures are the lowest, but humidity is the highest. The dry season runs from November to April, which is the hottest part of the year in Cambodia. Tourism is Cambodia’s second-largest industry and continues to grow by leaps and bounds each quarter, with just over two million visitors arriving there each year. Here are 14 of the most popular tourist venues in Cambodia. No trip to Cambodia is complete without a compulsory visit to the temple compound at Angkor. In particular, Angkor Wat stands out as one of the major tourists draws in Cambodia. First constructed as a Hindu temple, it was converted to a Buddhist temple in the 15th century to accommodate the predominant religion in the region. The temple was four centuries in the making and has a pyramid shape comprised of three tiers. Five towers shaped like lotus flowers tower 65 meters from the ground. The outside walls measure nearly 1,500 meters in length. There is also a moat surrounding the temple. Three things you definitely want to see during your visit to Angkor Wat is the sunrise from the temple, the reclining Buddha on the third floor, and the 2,000 ancient carvings and drawings on the walls of the temple. The Phnom Sambok Temples are three levels of temples, shrines, and living quarters for Buddhist monks. Located on a hilltop, the first level is a green garden filled with the nature and quiet beauty of the Cambodian countryside. The second level has a reclining Buddha statue and the third is an observatory where visitors can get a panoramic view of the Mekong River Valley below. 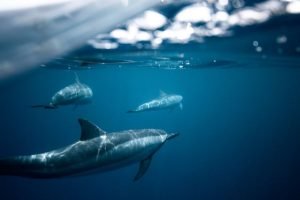 About 15-20 freshwater dolphins call the Mekong River home. Once fished to the point of extinction, Cambodian officials hope they will thrive in this personal habitat, which has become world-famous among tourists. As you can see, the Mekong River plays an important role in just about every part of Cambodia. In the Stung Treng area of the country, tourists can hire a variety of tour guides that will take them on a five-hour journey up the river to the border of neighboring Laos. Tourists have their choice of traditional wooden boats for a real cultural experience or faster-paced motorboats for convenience. These trips are a great way to see areas of Cambodia that you may not be able to otherwise. The Mondulkiri area of Cambodia is an ecotourist‘s dream. It’s where the last few species of animals hunted to the point of extinction live in Cambodia – like tigers and elephants. On the other hand, it’s also home to the world’s largest population of a particular kind of primate. These animals co-exist with the local tribal people among Mondulkiri’s mountains, waterfalls, and rolling green countryside. If you truly want to experience Cambodia in an up-close and personal kind of way, taking an all-terrain vehicle (ATV) through the country’s outback is definitely the way to go. Tour guides lead the way and plan an excursion you will never forget. Choose from a one-hour sightseeing tour to a days-long adventure in the wilderness.

This orphanage was created by ex-patriots to accommodate orphaned and displaced children who had lost their parents in recent wars. They graciously welcome volunteers year-round. Becoming a volunteer for the orphanage would be a great adventure as well as a rewarding experience. Even if you can’t volunteer, visitors to the orphanage are welcomed.

Explore the Cambodian countryside on horseback. Your guide will lead you through local villages, rice fields, pagodas, and other areas of interest. The horses are trained and suitable for riders of any skill, from beginner to pro. Alternately, you can opt to ride in a horse-drawn carriage if riding an actual horse isn’t for you. Choose from one-hour tours or half-day excursions. This is another place for ecotourists to put on their To See List. The village offers information and presentations about local flora and fauna as well as ox-cart rides and nature trails to explore. A 40ft waterfall makes the perfect backdrop for this Cambodian ecotour. The Elephant Valley Project is a grassroots to rehabilitate and reintroduce the elephant population in Cambodia. The program welcomes visitors to take part by offering presentations on elephant behaviors, lifestyle, and body language. Visitors are taught how to handle and interact with the elephants in a safe manner and get to experience a lot of hands-on activities alongside trained project coordinators. These rickety, local trains are actually made of bamboo and are nothing more than carts powered by a lawnmower motor, essentially. They travel along uneven rail tracks and are used by locals to transport goods and people from Point A to Point B. The most amazing thing about these trains is that if two of them meet on the tracks going in the opposite direction, the one with the least people and cargo must be taken apart and moved from the tracks until the other train passes. Then its quickly put back together and continues on its way. This is one of those Do Not Miss attractions for any tourist.

12. Weaves of Cambodia in Tbeng Meanchey The Weaves of Cambodia was started in America by Vietnam Veterans as a way to rehabilitate those who were injured by landmines during the war. The weavers are at their handlooms daily, creating silk scarves, sarongs, and other silk garments for export to countries around the world.

Rachana Handicrafts is a workshop that trains impoverished women to sew and make other crafts to be sold in the workshop’s market. The women receive valuable training and the monies made from the sale of their items go toward helping them sustain their families.