Cannes is a luxury resort town on the southeastern coast of France, along the French Riviera. Despite its small size of just eight square miles and relatively low population of 80,000 – Cannes is a world-renowned tourist destination. In fact, the local economy and business infrastructure in Cannes are both based heavily on tourists. There are 6,500 companies in Cannes and half of those are geared toward the service and trade industries.

Cannes has a wonderful climate, which is part of the reason so many people flock there each year. The city enjoys long, warm summers with twelve hours of sunlight each day and average temperatures in the mid-80s. Even in the short winter months, the temperatures in Cannes rarely fall below 50 degrees, which makes for a welcoming environment year-round. There are many annual events that bring visitors to Cannes by the thousands. One, in particular, is the Cannes Film Festival, which attracts celebrities from all over the world. Aside from the annual events, there are lots to see and do in Cannes. We’re going to outline some of the best places to visit in the city to see where it is the tourists go when they come to town. If you can’t make it to the film festival itself, you can at least tour the building where the festival is held. It has three large auditoriums, a number of conference halls, a night club and even a restaurant on site. Located in the Old Port area, there is also some pretty scenery surrounding the place as well. The Vieux Port area of Cannes is everything you’d imagine from a quaint French seaside town, complete with walkways, piers, docks, seaside eateries, and little shops to peruse. This is a perfect location to spend an afternoon in the city.

At the top of the scenic Mont Chevalier, the Watch Tower has been standing guard over the city since the 11th Century. The tower provides some of the best panoramic views of the city and is well worth a visit. 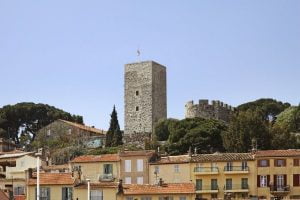 Even though you’re in France, you can still learn to appreciate other cultures by taking a trip to this great international museum. There you will find fascinating art exhibits from the Far East and Central America – including pieces from Egypt, Greece, and Rome.

The church at Notre-Dame de l’Espérance is a popular religious tourist destination in Cannes due to the 17th Century Madonna on The High Altar statue and 14th Century statue of St. Anne that are housed there. La Croisette is a popular promenade that runs parallel to the city’s shoreline. It’s lined with some of the best high-end boutiques in the city as well as some of the most popular bars and restaurants. You can eat, shop, take a stroll or just grab a bench and take in the sights. It’s definitely the place to see and be seen in Cannes – and very popular with locals and tourists alike. Le Suquet is a gem in the city and a truly do-not-miss attraction. It’s a long and winding cobblestone street through the heart of the city’s Old Town area. It’s narrow and lined with some of the most amazing restaurants in the city. Although getting to the top/end of the street involves a little climbing, the view from the top is unsurpassed anywhere in the city.

While you’re in the Le Suquet area, do not miss the chance to visit the Tour du Masque. It’s the massive tower you’ll see looming in the distance. Built as a citadel in the 12th Century, local legend claims that a man with an iron mask escaped from prison and lived in the tower in hiding until his death. It’s said that his ghost haunts the tower today. See if you can find the mask hanging on the door of the tower. The Abbaye Notre Dame de Lérins is a 3rd Century Christian monastery and one of the oldest Christian monasteries to be in continuous operation today. An order of monks still resides here and the church is open to the public for mass and visitation, although most of the other parts of the compound do not allow public access.

Le Grand Jas Cemetery is the largest cemetery in the South of France and is known for the intricate stonework on the monuments and mausoleums inside. It’s also the final resting place of some of Cannes’ famous residents – like Louis Pasteur and Pablo Picasso’s first wife.

A scenic drive through the Estérel Mountains is a must if you find yourself in Cannes. The long and winding highway takes you through some of the most beautiful nature areas in the region. There are many quaint stops along the route along the coastal highway.

Île Ste-Marguerite is an island off the coast of Cannes that’s easily accessible by private or chartered boat. It’s the site where the aforementioned man with the iron mask was imprisoned as well as an aquarium and Royal Fort.

Île St-Honorat is another tiny island off the coast of Cannes. It’s the location of a monastery built-in 1073. Tourists can explore the little island at their leisure and picnic among the eucalyptus trees and other natural flora in the area.

Mont Vinaigre provides a vantage point that is unsurpassed in the region. Tourists can see for miles and miles from the top of Mont Vinaigre. On a clear day, you can also catch a glimpse of the Italian Alps in the distance. A breathtaking location that any Cannes visitor should see.

Marineland is a fun destination for travelers with children. It’s a marine zoo/aquarium that features shows by dolphins, killer whales, and other marine life. There’s also a cool glass tunnel that lets you walk through the massive aquariums and get close to the creatures behind the glass.

The Musée International de la Parfumerie (Perfume Museum) takes visitors on a fascinating journey through the ancient perfume-making process and aromatherapy. The museum has interactive exhibits as well as many artifacts of significance on display.

Due to the number of festivals and events in Cannes each year, booking your accommodations well in advance is imperative, if you want to secure a good location. Expect to pay more for your vacation digs any time there is an event going on in town. Booking ahead might save you a little money, however. Be advised – mosquitoes are quite bad in Cannes so be sure to pack your repellant. There doesn’t seem to be a preferred hour or season for the critters, as they tend to swarm pretty much all the time.

Even though the crystal blue waters of the Mediterranean may beckon you, navigating them can be a little treacherous, due to the number of jellyfish and sharks in the area. If you’re stung by a jelly fish – it’s going to hurt – a lot. So seek medical attention right away. There are nearly 50 species of sharks in the area, but human attacks are rare. That said, be aware of your surroundings when you venture into the waters and be sure to give them space, should you encounter any sharks along the way. While you’re at the beach, be sure to use plenty of sunscreens and wear protective clothing like hats to avoid overexposure to the harmful UV rays. Drink plenty of fluids and do not overextend yourself – sound advice for wherever you go in Cannes, as the temperatures can be quite warm.