Fatehpur Sikri, a city in the Indian state of Uttar Pradesh as a part of Agra was the capital of the Mughals in 1585. After the departure of the Rajputs, the capital was made Agra. This city is considered to be a symbol of Fatehpur or victory due to the Mughal Emperor Akbar built after his Fateh, and Akbar also built this city as a tribute to Sufi Saint Salim Chishti built a big palace in it which was a saint. The tomb is located around the premises and at present, this city is one of the cities to preserve the famous architecture of India, there will be many archaeological carpet mosques, palaces, and forts, which we will tell you today in full detail. Whenever you go to Fatehpur Sikri, your journey should become easy. One of the most beautiful buildings in Fatehpur, Diwan-e-Khas was a private audience hall in which the emperor Akbar met privately guests and dignitaries and the Guptasutras. The most beautiful thing to see here is the Central Tower, also known as the Lotus Throne, which presents the details of beautiful stone carvings. The pillars here supported the walk and the four corners on the first floor connected the center as a circular platform, in which only the emperor’s close and religious leaders and those who wanted to see the emperor from close quarters could come. 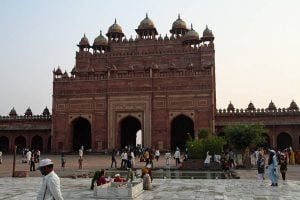 This door becomes the unique identity of Fatehpur Sikri which literally means magnificent structure. It was built by the Mughal emperor Akbar on his Gujarat conquest. It is also known as the gate of this grand, it is the main gate for entry into Jama Masjid. This door is made of red sandstone and designed with black marble stones, this door is 54 feet in height from the ground floor, the pillar and the arch of this door is inscribed with the Holy Quran and Persian inscription. Its height is 15 stories. This gate is exemplary of religious tolerance during the reign of Mughal emperor Akbar. 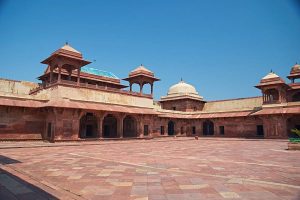 This palace is also commonly known as Maryam Uz Zamani Palace (optional). This palace is known as the lifestyle of the Rajput queen and Akbar’s favorite queen. It is known as Haram, in addition to Jodha Bai, There were also many Dacias and other queens of Akbar who used to worship Jodha Bai Hindu deity in this palace, in this building you will see a mixture of Rajputana and Mughal carpet style. This palace, 1 km from Fatehpur Sikri railway station, is one of the most famous and big buildings on the premises of Jodha Bai’s palace (or Jodha Bai’s Raja) Fatehpur Sikri, where you can easily get to know the history of Akbar and Jodha Bai. 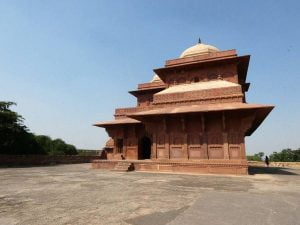 It was the residence of Birbal, the prime minister of Akbar, which was built around 1571, it was the official residence of Birbal. It was also a part of the harem. It housed many of Akbar’s Rakasas and Salima Begum. Presents to us in a way that can be seen through intricate carvings, real vents, and high floral patterns, in which you will see many different types of structures that will bring a unique history. 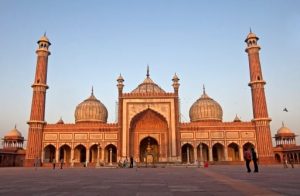 Considered as a World Heritage by UNESCO, this mosque is considered the largest mosque in the country. It was built by the Mughal Emperor Akbar under the supervision of Sufi Saint Sheikh Salim Chishti in 1571 -72, the mosque has a rectangular structure, in which the north, With the entrance to the south and east, as well as a sprawling courtyard. The interior of the mosque is decorated with glazed tiles, inlaid stones as well as paintings that are carved with the Holy Quran. This makes this mosque magnificent and attractive, then definitely go to the largest mosque in the country. One of the famous places to see in Fatehpur Sikri, Panch Mahal is built in a pyramid shape. The palace stands on 176 pillars, showing the complexity of Mughal architecture, it was built by Akbar, which is an ideal focal point for women of the royal family. The main purpose of this building was for entertainment in which dramatic, music and dance were performed, in its pillar shape we are shown carvings of Persian, Hindu, and Jain elements which are worth seeing. The tomb of Sant Salim Chishti, the landed officer of Khwaja Moinuddin Chishti of Ajmer was built by Akbar after his death. He first lived in a cave in Sikri, Chishti predicted Akbar’s son to be born and hence his tomb was built. After his death, he was known as Prince Sant Salim Chishti. This mausoleum was artfully carved in white stones, even after it was changed by different Mughal rulers, this place was one of the major centers of the Sufi movement in India. Was.

Which are the most visible places to see in Fatehpur Sikri?

Buland Darwaza, Jama Masjid, Panch Mahal, and Jodha Bai’s palace are major tourist spots in Fatehpur Sikri, whose details are given above.

What is Fatehpur Sikri famous for?

Built during the Mughal rule, Sikri, the capital, was built by Akbar in honor of Saint Salim Chishti, a city famous for its historical monuments and mosques.

Fatehpur Sikri is about 36 km from Agra, it may take you at least 5 hours.