There are many places to visit in Gujarat and to make your huge number of vacations memorable. The Father of India, Mahatma Gandhi also belongs to this state. The state offers you, scenic beauty, cultural beauty, and historic beauty. It is a technologically advanced state, which is having the largest petro mechanical complex in the city. The grace, of all ‘Gujarat tourist places’, cannot be explained in words. If you really want to know about the state, then visit this state, which will surely give you unforgettable memories. The cuisines of Gujarat are mainly vegetarian, but the food of this state is very light, so you can digest it easily. The state is also known as the ‘Jewel of the West’. Every Gujarat destination has its own beauty and importance. A unique type of handicrafts can be seen here, like high-quality weaving, hand block printing, and many more. Places to visit in Gujarat are:

Earlier Surat was known as Suryapur. This city is the 3rd cleanest city of India. Surat is also called as Textile City because of the production of silk and other fabrics & also known as Diamond City, because 95% of rough diamonds are cut and polished here. Surat is one of important, interesting and famous tourist spot of Gujarat. It is the 4th fastest growing city in the world. It is the most dynamic city of India. Places to visit in Surat: Gandhinagar is the capital of Gujarat. It is the birth place of Mahatma Gandhi. This city is located on the West Bank of Sabarmati River. Gandhinagar is one of the well planned city of India. It is one of the peaceful place to visit in Gujarat, as the city is free from heavy traffic and noise. In every sector of the city there are shopping centers, place for playing children, temples, greenery and many other things which will give you calmness in the city. Places to visit in Gandhinagar are:

Patan is an ancient fortified town. It was founded in 754 AD, by Vanraj Chavda. It is the hub of finest made textiles in the world. Hemchandracharya North Gujarat University, which is situated in Patan and it was named after Acharya Hemachandra. Earlier is was known as North Gujarat University. The city is famous for its Patola Sari, which is the finest Hand Woven Sarees produced here. Places to visit in Patan are: 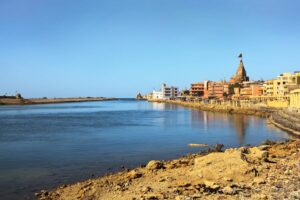 Dwarka, the glamorous kingdom of Lord Krishna. It is situated at the opening of Gomti River, on the Arbian Sea. The city is mainly known for Dwarkadheesh Temple. The city is one of the spiritual and holy place in Gujarat tourism. According to the traditional story, Dwarka was submarined in water after the death of Lord Krishna, later the city was rebuild. It is also known as the ‘Golden City’. Places to visit in Dwarka are:

Jamnagar is beautiful place to visit in Gujarat. The city was actually built by Jam Saheb Shri Ranjitsinhji, in its modern look. World’s largest oil refinery of Reliance Industries, has been setup in this town. Jamnagar is also known as ‘Brass City’, because of the production of brass parts and extruded rods. It is also called as ‘Jewel of Kathiawar’. There are lots of lovely monuments, beaches, island, national parks and many other sites to see. Places to visit in Jamnagar are: Bhavnagar was founded by Bhavsinhji Gohil, in 1724. The city is having the world’s largest ship breaking yard. It is an important center of diamond cutting and polishing industry. Beautiful water bodies and small hills makes it the lovely Gujarat destination. The city is having the largest production of salt. Bhavnagar is also famous for the Gujarati snack known as ‘Ganthiya’. Places to visit in Bhavnagar are: Rajkot is the 4th largest city of Gujarat. It is the seventh cleanest city of India and 22nd fastest growing city of the world. Rajkot is located on the banks of river Aji. The city was founded by Vibhoji Ajoji Jadeja in 1612. The city is famous for Bandhani Sarees, furniture, silver, textiles, silk embroidery, and patch work. Places to visit in Rajkot are:

Porbandar is one of the coastal city of Gujarat. It is situated on Saurashtra peninsula, on the Arbian Sea. The city is the birth place of Mahatma Gandhi (Father of Nation) and Sudama (Friend of Lord Krishna). The attractive thing of the city is that, it is made in fully planned way, with beautiful stone work and cravings. Places to visit in Porbandar are:

Other Places To Visit In Gujarat Are: