6 Places to Visit in Istanbul

Places to Visit in Istanbul: Istanbul is the only metropolis to straddle two continents and the mixture of cultures here, both current and historic, make Istanbul a totally unique and fascinating place.

There has been a settlement of some type on the banks of the Bosphorus where Europe and Asia meet since Neolithic times. Istanbul has been an important city since around 660 BC when it was settled by Greeks from the city of Megara under king Byzas who gave his name to the city Byzantium.

The city was later known as Constantinople and then Istanbul but the number of names it has had is nothing compared to the number of empires it has been a part of many times as capital. A Greek city, a Roman city and capital of the Eastern Roman Empire; the Byzantine empire came out of the Eastern Roman Empire and later came the Latin empire briefly, a return to the Byzantines and then the Ottoman empire. In an effort to move on from its Ottoman past The Republic of Turkey made Ankara the capital but Istanbul is still the cultural, and business capital and by far the largest city in Turkey.

Some prefer the Blue Mosque and some prefer the Hagia Sophia, both are magnificent buildings and either alone makes a visit to Istanbul worthwhile.

The Hagia Sophia was originally a church or rather a Cathedral from 360 until 1453 both under the Byzantine empire and the Latin Empire, therefore a Roman Catholic Cathedral from 1204 until 1261. The Hagia Sophia became a mosque though when the city was converted to Islam following the siege and fall of Constantinople and the beginning of the Ottoman era. It was Kemal Ataturk himself who had the Mosque converted into a museum in 1935 and much of the original features and decorations were put on a show again.

Today you can see the original Christian frescoes and mosaics as well as damage from the pillage of the city in 1453.  As a museum, it primarily tracks the building’s own history using the decorations on show and building work from different eras. The Sultan Ahmed Mosque to give it its real name this beautiful structure was built between 1609 and 1616; if it has some similarities to the Hagia Sophia this is because it was designed using Byzantine influences and influences directly from the far older Hagia Sophia mosque which it faces as well as elements of Ottoman building design.

You will want to take in the exterior of the Mosque both during the day when the colors sparkle in the sun and you can see the magnificent detail but also when it is lit up at night looking in some ways even more imposing and impressive. Tourists are able to visit the interior of the mosque but must dress appropriately and can then only visit at certain times; you will come through the courtyard first where you can see more of the exterior design before going inside and through the main prayer area of the mosque, decorations are in a traditional Ottoman style and the main dome rises above you painted with the most brilliant detail. The Grand Bazaar is an interesting structure from an architectural point of view but it is the contents that are maybe most interesting. The shops here offer a wide range of goods both new and second hand. There are some stalls selling tourist souvenirs but mostly sells to the people who live in the city and goods include antiques, jewelry, clothes, and the wares of many fantastic Artisans: all these and more available from the 3,000 shops that line the 61 internal avenues, if you think that this an impressively sized shopping center then consider that this covered market was built back in 1455-1456. For most of the reign of the Ottoman sultans, they were based from Istanbul in the Topkapi Palace. To give you some idea of the size of the complex at one point 4,000 people lived here, the main palace is based around four courtyards and there are many smaller buildings spread around the palace complex.

Open to tourists you can explore most of the vast area and buildings that included the Mint and Imperial treasury and a major Imperial Armoury, all of which can be visited and contain many artifacts of the Ottoman period.

You can also visit the palace’s own mosque, a range of different gardens, and the terrace overlooking the Bosphorus and almost every other part of the palace including rooms for state occasions and living quarters, all well preserved. 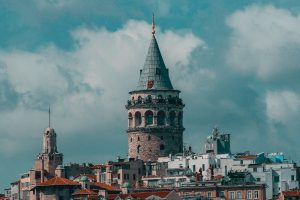 Built by Genoese traders living in the city the medieval Galata stone tower was erected in 1348 and today are a popular attraction and great place to take in a view of the historic part of Istanbul, though the area around the tower has a much more European feel than much of the rest of the old city.

The tower is a total of nine stories, but much higher than the buildings around and on a high point as well. From the restaurant and café on the upper floors, you can enjoy the view taking in much of the Bosphorus while having some lunch or dinner. A Bosphorus cruise will let you skirt between Europe and Asia and take in the vista of the Asian and European cities, sites clearly visible from the river include the Topkapi Palace, Maiden Tower, and other parks and palaces. Further along, see the impressive Villas of rich Turks, many originally built in Ottoman times, along the shore surrounded by parks and woodland. On the waters of Bosphorus itself, you will pass by fishing boats, tankers, and a wide variety of other shipping passing through this busy waterway making it seem not a division through the middle of the city as much as a living, breathing part of the city.

There is much more to see and do in Istanbul and by walking between these sites whenever possible you will get the chance to take in the feel of the city and come across many charming streets and of course shops, cafes, and restaurants to enjoy and take in the unique Istanbul culture from.

FacebookTwitterPinterestEmailLinkedInWhatsApp
Tags: more to see and do in Istanbul, Visit in Istanbul
Search here…
Start your own Website