1st November 1956 – the states of Vindhya Pradesh, Madhya Bharat, and Bhopal merged together and formed the beautiful and regal state of Madhya Pradesh. As per its name, “Madhya Pradesh” means the Central State. Not only because of its central location but also because of its rich diversity it is known as the “HEART OF INDIA”. It gives life to our country just as the heart pumps blood and gives life to us. Characterized by low and soothing hills, mild and extensive plateaus, and calm river valleys, this central state does have what it takes to be the heart of the county. The richness of history, tradition, culture, art, and craft does make Madhya Pradesh take the credit for making India such a diverse country. Going through the list of the places to visit in Madhya Pradesh will surely grab the attention of the readers and make them interested to know about the true beauty of this unique state. It can be well-reckoned as the epitome of Indian Art. Consisting of 22 grouped temples, Khajuraho stands out to be one of the famous tourist spots amongst world travelers. If you are a history lover, then you are ought to fall in love with the intricate carvings and the gorgeousness of the temples that were built by the Chandel Dynasty of Madhya Pradesh. What is most amazing is the depiction of attaining spiritual peace through the fine touch of eroticism. The Khajuraho temples are the crowning glory of this land of vast antiquity. One will definitely savor the neatly carved motives of the temples and the spectacular artistic creativity. Its magnificent architectural work makes Khajuraho easily one of the most popular heritage sites of India. Some of the beautiful attractions of Khajuraho are: Located in Bhiyanpura of Madhya Pradesh, the Bhimbetka Caves are a real treat for the eyes. It will surely take one to the prehistoric era of India. The caves serve as a gallery of wall paintings that vividly display the times of the prehistoric age of India. One seems to time travel while glancing through these bewitching paintings. Besides, an ample amount of inscriptions that provide information of the then times has also been found. Bhimbetka will certainly be captivating for the history-buffs and is indeed one of the most intriguing places in Madhya Pradesh. This Buddhist hub is a must-see for everyone. The great Indian Emperor, Ashoka had built this amazing Sanchi-Stupa. Devi, the wife of Emperor Ashoka, was born in Sanchi and her grand wedding of her to Ashoka was also held in Sanchi. The city of Sanchi is famous for its stupas and also the other eloquent monuments. The Sanchi-Stupa with its massive dome stands straight majestically. It is the oldest stone structure that was built in the Mauryan Period. Sanchi is a witness to all the different ruling dynasties of ancient India and is thus boastful about its history. The amazing fact is that still now it can be well perceived that it was a great ancient seat of learning. Places to visit in Sanchi are: Wildlife is a quintessential element that adds to the beauty of a place. And truly, Bandhavgarh National Park, with all its thrill and magnanimity makes Madhya Pradesh all the more diverse. It is famous for its large biodiversity. It is a home to a large number of tigers. Besides, the park provides shelter to various species of birds, aquatic animals, and mammals. It is a dream destination for all those adventure lovers. And do you know what is the best? You will never know what you will spot at the next turn. There lies the thrill. Being such an audacious place Bandhavgarh National Park is definitely the highlight of Madhya Pradesh. Do you remember those delightful picturesque scenes from Bollywood flicks like ASHOKA and CHAKRAVHYUH? You must have wondered that which part of the world contained so much beauty. It is Pachmarhi. A beautiful hill station that is a popular destination for tourists, is known as “SATPURA KI RANI”(“QUEEN OF THE SATPURAS”). When one is tired of the terrible summer heat, Pachmarhi will surely calm him down. The cave paintings in the forests, viewpoints, and tranquil waterfalls together constitute the serenity of the place. Pachmarhi itself is a rich hub of flora as well as fauna. Bhopal is known as the City of Lakes because there are many small and large lakes. It is the capital of Madhya Pradesh. The largest mosque in Asia, which is known as Taj Ulmasjid, was built by Begum Shah Jahan. This city was founded by Raja Bhoj. It is the Greenest city in India. It has the third largest bus rapid system corridor, which is called BRTS. Bhopal is the largest city of MP. This city is having a very large number of export. The largest Electrode plant of the world is located here. There is the seventh largest mall of India, which is known as DB City mall. It is one of the famous ‘tourist places in Madhya Pradesh’, with various wildlife sanctuaries, waterfalls, lakes, temples, ancient museums, and many other things. This city is also famous for its engineering institutions, as it is the engineering hub of Madhya Pradesh. Places to visit in Bhopal are: 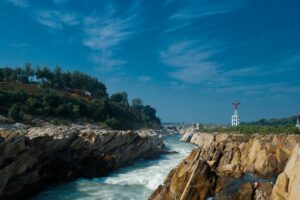 Jabalpur is the second largest city in Madhya Pradesh. It is located on the banks of the Narmada River. In the past Jabalpur was known as Jubbularg, but its name was changed at the time of the Britishers. This city is known as the City of Rocks, because of the large number of monuments and forts in the city. The known game Snooker was first played in this city in 1875, by the British officers mess. The people who love history can explore their knowledge here. This is an important place that should be there in the list of Tourist places of Madhya Pradesh. The historic monuments and temples are having various architectural designs. Jabalpur has the beautiful Narmada Valley, which is the best picturesque spot. Places to visit in Jabalpur are: Gwalior was formed in the mid of 18th century, by the Martha Chief, named as Ranoji Sindhia. It is located in the valet, which is surrounded by hills. It is the major “tourist places in Madhya Prradesh”. This city is known as Fort City, because of having beautiful architectural forts. Gwalior fort is the very old fort of this state and is having a very interesting history. There is the school in Gwalior, known as the Scindia, which was made in 1897, mainly the children of high people came here to study. It is a well-renowned boarding school of India. Many things are produced in this city, like textiles, leather, plastic goods, carpets, matches, and many other things. Places to visit in Gwalior are: Indore is one of the largest cities in Madhya Pradesh. It is known as the commercial capital of MP. This city was founded by Rao Nandlal Chaudhary. There is the beautiful Lal Bagh Palace, whose gates are manufactured in England and they were transported here. These gates are the exact replica of Buckingham Palace. Earlier the name of this city was ‘Indrapur’ but it was changed to Indore at the time of the Marathi Community. These is the main ‘tourist places in Madhya Pradesh’. Only this city is having the world cup square, in the whole world. There is the idol of Lord Ganesha, in Indore, which is the world’s largest idol. The largest colony in the Asia is located in this city. Places to visit in Indore are: This town was founded by Rudra Pratap Singh who was Bundela Rajput Chief, in 1531. It is situated at the banks of the Betwa River. There are many beautiful monuments, some big and some small. Orchha fort is very famous here. It was established by the same king who founded this city. There is the stunning Raj Mahal, which was made by Madhukar Shah, in 17th century. It is one of the main Tourist places in Madhya Pradesh. Orcha has many ancient temples and the architecture done in that is very glamorous. Places to visit in Orchha are: 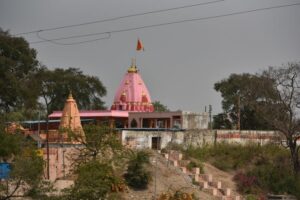 Ujjain is situated on the banks of river Shipra. It is the fifth largest city of Madhya Pradesh. Ujjain is one of the religious cities for Hindus. This city is also known as Avanti or Avantikapuri. In the list of ‘tourist places in Madhya Pradesh’, it is one of the favorite places of visitors. There is the temple known as Mahakaleshwar, which is one of the 12 jyotirlingas of Lord Shiva. This city was ruled by many dynasties in the past like the Gupta Dynasty. Ujjain was a very famous learning center, in ancient times. The Kumbh Mela festival is organized, hereafter every 12 years. Places to visit in Ujjain are: Omkareshwar is a place that is specially dedicated to Lord Shiva. It is also one of the 12 jyotirlingas of Lord Shiva. It is the calm and relaxing, tourist places in Madhya Pradesh. There are beautiful hills, and the Narmada River is flowing between them, it is a beautiful picturesque spot. It is the religious place of Hindus. The two religious rivers Narmada and Kaveri are meeting in this city, and the island where they meet gives the shape of ‘Om’, which is the religious symbol of Hindus. Places to visit in Omkareshwar are: 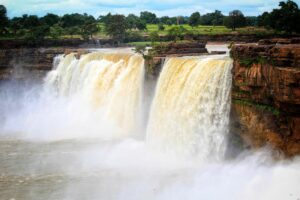 Chitrakoot is located in the north Vindhyan range. It is believed that Lord Rama, with his wife Sita and Brother Lakshman, had spent around eleven years of their exile. This city is known as the hill of many wonders. The forest of Chitrakoot had many holy sites. There are many Yoga and Ayurvedic centers. Many temples are there, which are beautifully made. Mainly the whole city is covered with hills. For nature lovers, it is the best tourist places in Madhya Pradesh. The Chitrakoot falls, is the largest waterfall in India. The height of this waterfall is 29 meters and in monsoon, it widens up to 150 meters. The color of this waterfall changes from season to season, like in monsoon the color of it changes to dark violet. The main source of this waterfall is river Narmada. Places to visit in Chitrakoot are:

Thus these are some of the fascinating places of Madhya Pradesh. These places provide one, with the calmness of the seas, the vigor of the mountains as well as the sensation of the forests. They make one aware of the rich history of our country; something that will surely appeal to everyone. Therefore, it is recommended to go and discover these places through which one will inculcate knowledge as well as celebrate beauty.