Once the Capital of the Western Roman Empire now the world’s capital of fashion Milan is as much for the connoisseur of History as shopping and Italian food and drink.

What many people don’t realize is that Milan is the financial capital of Italy and as such, there is a lot of money here and the shops, bars, and restaurants reflect this. As a modern city though Milan hasn’t lost its history though there are new modern buildings including skyscrapers here as well; in fact, it is World War two bombing that is most to blame for the loss of any historic sites; thankfully though Milan’s most famous and celebrated buildings came off mainly unscathed.

Places to visit in Milan The Duomo di Milano, Cathedral of Milan, is a stunning Gothic Cathedral: Italy’s largest and the fourth largest in the world it took four centuries to complete. The Cathedral is at the heart of the old Roman city with main streets radiating from it and circling around it. As well as taking a walk around the Cathedral to take in the architecture and going inside to enjoy the interior you may want to go up to the roof of the Cathedral for fantastic views of Milan, and even the alps in the distance on a clear day.

In front of the Cathedral in the Piazza del Duomo, which is Milan’s main square, many historic buildings line the square including the Royal Palace. 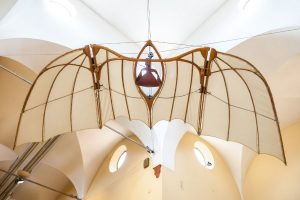 This museum’s dedication is to Leonardo da Vinci and it includes a section on the great man’s work but is not purely about him but is in fact the national Science and Technology Museum of Italy. It tracks the history of science in areas including energy, transport, and communication and has some excellent exhibits. These include in the transport section important historical trains, airplanes, and boats, primarily from Italy, plus the command bridge of a transatlantic liner and a cold war submarine. One of the largest citadels in Europe was the seat of the Duchy of Milan; having been started in the 14th century and finished in the 15th. The castle itself is well worth seeing and it is a considerable size and certainly not a ruin, within one room you will also find ceiling paintings by Leonardo da Vinci.

The castle is free entry but the museums themselves are not, they include though the Museum of Ancient Art, the Museum of Musical Instruments, and the Archaeological museum including a Prehistoric and Egyptian section. An impressive 15th-century church and convent in a truly Italian style it is famous for housing the famous Last Supper mural by Leonardo da Vinci. To visit though you will need to reserve tickets a long time in advance, especially in summer though you may be lucky and get a ticket from a cancellation. If you can’t get a ticket to go inside you may still want to take in the architecture from outside. Milan has a lot of beautiful churches and we could fill up the entire list with them but the church of Saint Maurice is among the most beautiful and a must-see for fans of art and architecture. Built-in a Lombard Renaissance style the inside is covered everywhere you look with fantastic frescoes’ by Bernado Luini. A night at the Opera, if you have never been to the opera before Milan may be the best place in the world to do it at one of the best and most beautiful opera houses in the world also have one of the most renowned Opera companies and ballet companies resident. This late 19th-century shopping arcade with its beautiful vaulted cast-iron arches covered in glass is worth visiting even if you have no intention to shop. With so many fantastic shops though you could easily spend a day or even a weekend shopping here. Another of Milan’s main squares was the heart of the city in the middle ages:          including for traders hence the name literally meaning merchant’s square. Buildings on the square include the 13th-century city headquarters building, the Notary’s Palace, and the Giureconsulti Palace. Much later architecture than that of the medieval and middle ages can be enjoyed in the city as well including the Pirelli building and also the Torre Velasca. The Velasca Tower in English is a 1950s skyscraper but built in such a style it feels very much a part of Milan and takes influence from buildings such as the Cathedral. The canals of Milan, used for navigation and originally also irrigation, were important to the city for centuries but became neglected and dilapidated before being restored late in the 20th century. The canals now are pleasant to walk along or take a tour upon but also many of the city’s best nightclubs are on boats upon the wider canals too. A sculpture designed by Leonardo Di Vinci but actually made in 1997 this cast iron statue is located at the Hippodrome of San Siro. This major street in the northeast of Milan is another important shopping street but you can probably afford to actually buy things here. Primarily clothes shops the 350 shops here offer a wide variety of men’s and women’s clothes and other fashion items, still made with Italian style but more suited to the pockets of most people. As well as shopping many of the cities best restaurants and cafes are along this street and as they cater to locals as well as tourists you can expect them to be really good.

Often forgotten in favor of visits to Rome or Venice, Milan is a very beautiful city first and foremost and that goes for the buildings but also the people who seem to be elegantly dressed without exception. There is so much to see and so much shopping to do that you mustn’t forget to find time to enjoy the food and drink as well, which is if course also excellent.

Milan is a popular weekend city break but you may find you need much longer than this to take in everything in the city; many people come here to shop but come back again to take in the history.

FacebookTwitterPinterestEmailLinkedInWhatsApp
Tags: Free things to do in Milan, Places to Visit in Milan, Trip to Milan
Search here…
Start your own Website