There is hardly a city out there with more to offer lovers of history, nor for that matter lover of culture and of course fine food and drink, than Rome. Many who come to Rome expect a city where the Roman remains are the only things to be seen alongside the Vatican City.

Places to Visit in Rome The Colosseum in Rome is perhaps Rome’s most famous building and the Roman’s most famous legacy. Found in the Colosseum district along with many other Roman buildings and remains the Colosseum is far bigger than you would expect from having seen photos and the scale of something so old will take a few moments to come to terms with as you first approach it. Though the Colosseum is more famous and more photogenic the Roman Forum is more interesting. The seat of Government for most of the Roman Kingdom and Republic’s history the site is large and with various remains from different eras.

The Forum itself is actually the plaza in the center but the ruins of important buildings surround it including the records office, Senate building, prison, and the Regia; the Regia is from the time when Rome was a kingdom whose Kings had their residence here. There are also remains of temples with the earliest being the Temple of Castor and Pollux from the 5th century BC. The arches of Septimius Severus and Titus are some of the best-preserved and most impressive buildings to see here.

3. The Forum of Augustus One of the Forums of Imperial Rome was built at the command of the first Roman emperor Augustus, who also had the Temple to Mars built here remains of which you can still visit. This forum was not a replacement for the Roman Forum but was to allow extra space for government functions that could not be accommodated at the Roman Forum.

4. The Forum and Markets of Trajan The Forum of Trajan dedicated in 112 includes Trajan’s column which still stands and is the most interesting part of the ruins through the center of where the piazza would have been ahs been excavated and the remains are on show in what is a public space now. Besides this, you can also see the preserved markets built shortly after the forum that became known as the markets of Trajan. The Capitoline Hill was the center of the city for the earliest Romans whose own Acropolis was here. The widest variety of ruins anywhere in Rome is here going back to the beginning of Rome and stretching through to Renaissance Rome and beyond.

Many of the city’s museums are here in splendid Renaissance buildings such as the Palazzo dei Conservatori which itself contains mainly sculptures from ancient Rome as well as Ancient Egypt and Greece. 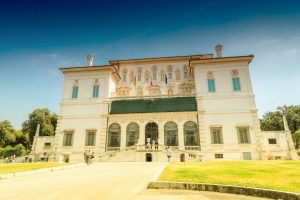 The Borghese one of Rome’s most famous families who have had close ties to the Vatican since Pope Paul the V of the Borghese family was elected, had this impressive Villa as their residence. The 17th-century villa is now a museum though and houses the famous collections of art, including Roman sculptures, that the family had collected. The villa itself is a beautiful and interesting building but is overwhelmed by the beauty of its contents. The Villa’s gardens are also worth spending some time walking and relaxing in with a number of small Romanesque temples, lakes, and finding avenues of trees. The idea of going and walking up some steps for fun may seem a little odd but this 18th-century stairway is impressive in its size and width as it climbs the steep slope from Piazza di Spagna to Piazza Trinita del Monti giving great photo opportunities from the top. Built on the site of the Roman Stadium of Domitian it covers a similar area and shape and now includes a number of monuments such as the fountain of the four rivers complete with an Egyptian Obelisk. If you visit in the run-up to Christmas there is a traditional Italian Christmas Market here that is well worth a visit. Probably the most complete Roman building the Pantheon is impressive not just for its age but also the engineering that went into it. The circular building fronted by Corinthian columns and pediment has been a Catholic Church since the 7th century meaning it has always been in use, hence the reason for its preservation and escape from use as a quarry. Originally the Pantheon was a temple to the Pantheon of Roman Gods, and its original domed roof is even now the world’s largest unreinforced concrete dome.

Literally, the old green mountain, visit here to eat if you want authentic Italian cuisine at an affordable price. The Trattorias here in this residential neighborhood are frequented by the locals to eat and though the view here (from Rome’s highest point) is beautiful you won’t be paying for it as you will in many of Rome’s famous piazzas where you will only be paying for the view often and too frequently not for good food. The Trevi fountain would be great for taking photos of if you could get a clear shot but in summer this is unlikely and you may be better off buying a postcard but the fantastic Baroque fountain still should be visited and a coin thrown in of course. San Lorenzo is where the city comes to parties including many of the students from the city, there is a wide variety of bars and clubs here and the atmosphere is very relaxed and laid back, as you would expect from the Italians. St Peter’s Basilica is in Rome but not Italy, to visit this famous site you will have to enter the Vatican City. This church has the largest interior space of any church in the world and though as a Roman Catholic this is one of the holiest sites you can visit for those who aren’t Roman Catholic it is still a beautiful and fascinating place to take in as well as St Peter’s square outside.

With so much to see you may not get to go inside every building or visit every attraction for long and a walk around the city shouldn’t be missed to take in Rome as a whole where almost every street in the old city or the old Roman part of the city is filled with fantastic historical buildings and monuments.