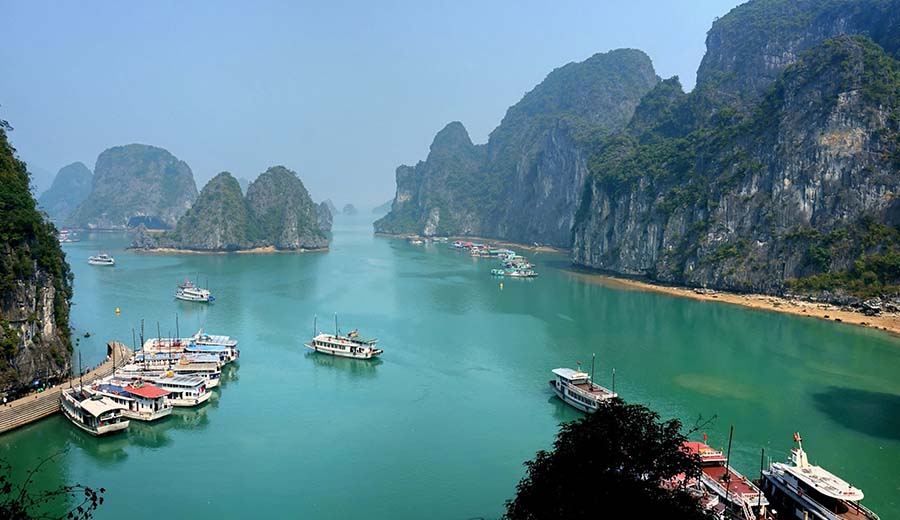 5 places to visit in Vietnam

Places to visit in Vietnam: Located in the easternmost part of Indochina Peninsula, Vietnam is the 9th most populous Asian country. The country is surrounded by China in the North and Cambodia to the southwest. It is a land of remarkable scenery which varies from lush green mountain terraces in the North to the mesmerizing valleys of the Central highland and the amazing beaches in the South. It has a beautiful collaboration of natural habitats and cultural diversification.

From mountains to the valleys, the country is painted in every shade of green. It is an excellent tourist spot. One can find plenty of man-made historical structures ranging from war museums, colonial structures, and ancient citadels. Many of its ancient buildings portray French influence in their architecture. Their cuisines are regarded as one of the best in the world. Some of the must-visit tourist destinations in Vietnam are as follows: The Karst seascape of the Halong Bay is a UNESCO certified world heritage site. The Gulf of Tonkin, within the bay, has more than a thousand micro limestone islands which have eroded due to water and wind throughout years. This place allows the tourists to cruise over the bay and become awestruck at its overwhelming beauty. The Imperial Citadel of Thang Long is an old artefact of the Vietnamese history and has a historical and cultural significance.  The building is 40 meters high and is another UNESCO world heritage site. The flag tower is one of the recognizable features of the Citadel. Archaeologists found bronze coins, Ceramics and pottery from China and many other places in Asia. This demonstrates the ongoing trade within the countries since the historic eras. Formerly known as Saigon, the city was the capital of the country during Vietnam War. It lies along the Saigon River, in Southern Vietnam. It was named after a very famous political figure of Vietnam, Ho Chi Minh. After his death, his body is preserved in a glass case at the Ho Chi Minh Mausoleum. Although there is no entry fee, yet the visitors are expected to dress modestly in order to show respect to the great leader. One among the many attractions in Southwestern Vietnam is the Mekong Delta. From the floating markets, rice paddies, fruit orchards, sugarcane groves to the sanctuaries and quaint villages, Mekong Delta has everything one would love to explore. The fertile delta region allows cultivation of food crops mainly rice. It is also known as the rice basket of Vietnam. These are the war tunnels created for Vietnamese soldiers to survive underground during the war. They have now become huge war museums. The tourists are allowed to have a look at how and under what conditions the soldiers survived during the war against the French. The underground tunnels expand up to 120 km and consist of trapdoors, kitchen, storage facility, living area, and hospitals.