One of the seven continents, Europe is the second-smallest continent in the world with an area of about 10,180,000 square kilometers. This continent has a total of 50 countries. Europe in particular Ancient Greece is the birthplace of Western Culture and therefore, is home to some of the most marvelous monuments in the world. In the following articles, we have listed some of the most popular monuments which you must pay a visit to while visiting Europe.

One of the most spectacular architectural marvels of the world, perhaps the icon for Paris & France, the Eiffel Tower is the most visited tourist attraction in Paris. This iron tower is located on the Champ de Mars, named after its engineer Gustave Eiffel who designed it in the year 1889. It soars up to the height of 324 meters and is the tallest structure in Paris. An oblique amphitheater in the center of the city of Rome, Italy, this Colosseum is constructed of concrete and stone. In ancient times, it was the biggest amphitheater of the Roman Empire. As per historians, it is considered as one of the finest works of Roman engineering and architecture. In fact, at that time it was the largest amphitheater in the world and had the capacity of seating between 50,000 and 80,000 spectators. This ancient monument is estimated to be constructed in AD 70-80 and is listed as a UNESCO World Heritage Site in Italy. Formally referred to as the Elizabeth Tower and nick-named Big Ben for the great bell of the clock, this architecture is situated at the Palace of Westminster in London, England. The tower was completed in the year 1858 and holds the status of being the biggest four-faced chiming clock in the world and the third-tallest free-standing clock tower in the world. 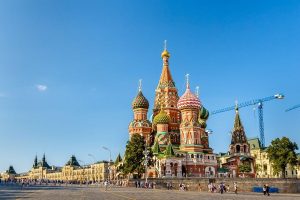 Situated in Moscow’s Red Square, Saint Basil’s Cathedral is a Russian Orthodox Church. This magnificent church was built from 1555 till 1561 on orders from Ivan the Terrible. This massive cathedral marks the geometric center of Moscow, Russia. Due to its stunning ancient architecture, it has been listed as a UNESCO World Heritage Site of the world. 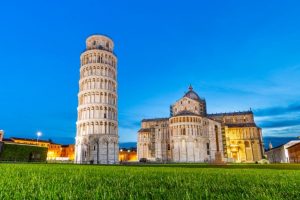 Initially, a bell tower renowned for its inadvertent tilt to one side, the Leaning Tower of Pisa is truly an amazing architecture to witness. As per the historical facts, the tilt began during construction, sourced by an inadequate foundation on the ground too delicate on one side. The construction started in 1173 and was completed only in 1372. This magnificent piece of incredible architecture soars up to the height of 55 meters. An iconic symbol of the Trevi district of Rome, Italy, Trevi Fountain is one of the most photographic spots in Rome. Standing 26.3 meters (86 ft) high and 49.15 meters (161.3 ft) wide, it is the biggest Baroque fountain in the city and one of the most popular fountains in the world. A popular legend related to this fountain is that if visitors throw a coin into the fountain, it is assured that they will return to Rome once again.

Apart from these, the Tower Bridge (London, England), Sagrada Familia (Barcelona, Spain), Arc de Triumph (Paris, France), and Acropolis Of Athens (Athens, Greece) are some of the other famous monuments in Europe.  Visit EaseMyTrip.in and explore various holiday packages in Europe and around the world.