Pushkar is one of the ancient cities of India and is known for its religious value. It has its mentioned even in the Ramayana and has many legends related to it. There are thousands of pilgrims that visit this town every year. It is one of the most important Hindu pilgrimages. There are many tourist spots, mainly religious centers. Some of the mention-worthy names are: 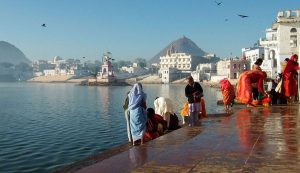 the holy lake is considered to be the king of pilgrimages as far as water bodies are concerned. It has 52 ghats surrounding it where pilgrims bathe in order to attain salvation (especially during Kartik Poornima). The lake concerns various mythological legends and has many mentions in the Hindu epic Mahabharata and Ramayana. According to Hindu scriptures, once Brahma saw Vajranabha harass his children and immediately killed the demon with this weapon, the lotus. In this fight, the petals of the lotus fell on three places where the three lakes emerged. Brahma named them Jyeshta Pushkar, Madya Pushkar, and Kanishka Pushkar, after the lotus flower(Pushpa) that fell from his hand(kar). 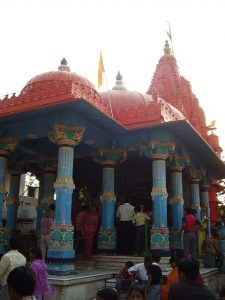 there are very few temples that are dedicated to Lord Brahma, who is considered to be the God of creation, one of which is situated in the town of Pushkar. It is said that when Brahma came to earth, he decided to perform a yagna at the main Pushkar Lake. Since it was mandatory for his wife to be present at the time of yagna and she was unable to arrive on time, Brahma married a Gujjar girl named Gayatri. When Savitri, Brahma’s original wife learned about the marriage, she was furious. She cursed Brahma that he will only be worshiped in Pushkar and at that very place of yagna the Jagatpati temple was built.

The temple is situated on Ratnagiri hill. There are 200 stairs to the doorways of the temple. Though it is a very hard climb it is believed that the harder you work to reach the temple the more likely you are to receive ‘tapas’. It is said the Yagna incident when Savitri, the wife of Brahma, realized the severity of her deeds, she went to the Ratnagiri hills to sacrifice for the act. She changed into a river there and the temple was built in dedication to her. In the shrine, there are two idols of both the wives of Brahma, Savitri and Gayatri. Though traditionally Goddess Savitri is always worshiped and then prayers to Gayatri are offered.

When it comes to history, Rajasthan is a prominent name that comes to our minds. The city of Pushkar boasts about being so rich in heritage and history. It is not only a tourist spot but a holy place. Visiting this city cleanses the soul and uplifts the spirit. It informs one about the Hindu religion and its impact on Rajasthan. The above-mentioned pilgrimages are just the beginning; there are various other places that are equally special.

Things to do in Pushkar Tourists are excited to do camel safari in the deserts which are done by knowledgeable escorts and guides and is an experience not to miss who come to Pushkar.

Shopping in this place is wonderful such as shopping centers offering various books, fabrics, handicraft goods, traditional and fusion music and one can see the caution boards that avoid consumption of meat products and meat and alcohol within 5 km distance of Pushkar.

How to reach Pushkar: