Red Fort Delhi is a treasure chest of tales if only, you and I cared to stop and listened to its stones. As a frequent traveler to this fort, I have paused at its gates, and in its rooms and wondered about the enchanting history of this monument. 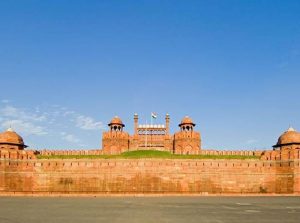 I do not want this post to be a travel guide; this post will be more about the history of Red Fort and its most famous inhabitants-the Mughals.

While I will introduce you to the various monuments of Red Fort Delhi, I shall also tell you the various events associated with them.

I hope you enjoy these stories.

Veil of the Bride

Visitors enter the Red Fort Delhi via the Lahore Gate. This gate faces the city of Lahore in Pakistan.

Now you will wonder about the nomenclature of this gate. No? Well, in the earlier days, Lahore was very much a part of Mughal India and was an important city. Lahore was also the springboard for any military campaigns directed at Afghanistan. At that time, Afghanistan was called Kandhar. Invaders headed to India had to conquer Kandhar first.

Well, in the earlier days, Lahore was very much a part of Mughal India and was an important city. It was also the springboard for any military campaigns directed at Afghanistan. At that time, Afghanistan was called Kandahar, and invaders headed to India had to conquer Kandhar first.

When the Red Fort first came up in 1648, the Lahore Gate used to face Chandni Chowk. But, when Aurangzeb assumed power in 1659, he changed the direction of this Gate by 90 degrees. The new Emperor wanted to twist the approach to the Fort.

Upon hearing this change in alignment, Shahjehan, the father of Aurangzeb, wrote a moving letter to Aurangzeb. He was in the captivity of his son at that time. Among other things, Shahjehan lamented that this change was like putting a veil on the face of a bride.

Did you know that Shahjahan was imprisoned by his third son Aurangzeb after the latter defeated Dara Shikoh in a battle?  Dara was the elder son of Shahjahan and was next in line to become the Emperor. Aurangzeb kept his captive father in the Agra Red Fort.

Meant for bows and arrows, not guns

The Red Fort walls are bows and arrows based on defensive structures. These battlements were not adapted for guns and canons. This is surprising because the Mughals had introduced the artillery in India way back in 1526. In that year, the Mughals had defeated the Lodhis in the first battle of Panipat.

I think that when Shahjahan built this Fort in 1648, he thought that there won’t be any attacks to his palace for a long time. He was clever and industrious and had brought a large part of India under his control. During Shahjahan’s time, the Mughal Empire was quite secure from external attacks.

When Aurangzeb came to power in 1659, initially he faced very little opposition from his enemies. However, after 15 years of his rule, Aurangzeb realized that he was not secure from external attacks. Tearing down the fort walls was impossible so he decided to change the direction of the gate.

Meena Bazaar- the Mall of Lust

Just as you enter the Red Fort Delhi, you are greeted by two rows of shops. This is a medieval era bazaar and has survived more than 360 years of turmoil. The name of this market is Chhatta Bazaar and has a very interesting history behind it.

Unconfirmed reports say that this roofed market in the Red Fort came into being after Shahjahan saw a market like this in Peshawar.

The Chatta Bazar was also called Meena Bazaar in the earlier days. Do you know why? It is said that during the 9 days of Nauroz, only the ladies belonging to the elite of the Mughal Empire could set up their stalls here. The only male who could come here and the shop was the Emperor himself. The Emperor used to haggle a lot with the beautiful ladies in this bazaar. It also was a good opportunity for him to entice some of them to his harem.

Much more than a mere mall

The Meena Bazaar or the Chhatta Bazaar was much more than a small-time market. The Mughals used this mall to impress the visiting envoys with their opulence. On display in this market were some of the finest materials that the world had seen- perfume, spices, bullion, textiles, muslin, etc.

From Agra to Delhi

One thing has always puzzled me; why did the Mughals shift their capital from Agra to Delhi? They were quite settled in Agra which gave them strategic space to fan out in the rebellious Deccan and Rajputana. Shahjahan did not face any significant threat from his enemies for most of his rule so what made him go 250 kilometers up north?

Our Red Fort Delhi story begins with Jahangir. I could have started with Akbar and Humayun but their connection with this monument is very indirect. I would dwell on them some other day in this post.

Jahangir was an indolent man. Probably, Salim (Jahangir) in his later years, did not want to come to this world at all. Mughal records say that his mother, could not conceive him for many years until she was pressed into the service of Salim Chishti. We do not know about the nature of service that she performed but, her child was duly named after the Sufi saint.

Salim grew up to be an indolent man. He was an opiate and a heavy drunkard. God knows how he picked up these bad habits. Salim had a weak spirit and a weaker mind and was quite unlike his father in many respects.

The affair of Khusro- Part 1

Akbar preferred Khusro over Salim as his successor. But, who was Khusro?

Khusro was one of the sons of Salim. The latter had other sons as well and one of them was Khurram, but right now we will talk only about Khusro.

When Akbar fell sick, he thought of anointing Khusro as his successor. To Akbar, Khusro was an ideal successor. He was handsome, industrious, clever, and clever. Akbar thought that Khusro would manage the Mughal Empire well. Akbar’s close confidantes did not think that way, however.

However, things did not go the way Akbar had planned. Akbar’s close relatives forced him to change his mind and ultimately, Salim succeeded Akbar upon the latter’s death in 1605.

The affair of Khusro- Part 2

Khusro had a Hindu mother and a Muslim father. His mother was a Rajput and belonged to Amber. His father, Jahangir was, of course, the son of Akbar.

This extraordinary man was handsome, well-spoken, and tactful. He had several followers but none of them gave him sound advice.

When Jahangir ascended the throne after his father’s death, the latter decided to keep a close watch on Khusro. One day, the sun came up to Jahangir and asked for permission to visit Akbar’s tomb. Jahangir agreed readily to his son’s request but decided to keep an eye on him. Khusro left the Agra Fort accompanied by 300 soldiers and reached Sikandra, where his grandfather was buried. After praying at the grave of Akbar, Khusro left for Mathura which is 50 kilometers from Agra.

After spending some time at Mathura, Khusro left for Delhi, 200 kilometers from Mathura. From Delhi, Khusro and his train departed for Punjab, where he met Guru Arjan Dev.

Clearly, Khusro had something in his mind.

All this while, Jahangir was tracing Khusro. He finally cornered his wayward son in Lahore. Khusro, at that time, was trying to capture the Lahore Fort.

A battle ensued between the father and son and ultimately Jahangir defeated Khusro.

Khusro was imprisoned and brought to Delhi along with his supporters. They were lined up on both sides of the main street in Delhi and later impaled alive. Khusro was made to watch this spectacle.

All this while, Manbai, the mother of Khusro was confused. She could not decide whether her husband, Jahangir was right or whether Khusro needed to be supported by her.

One fine day, she consumed a lot of opium and committed suicide. Manbai was sad at the turn of events unfolding in the Mughal household.

The story of Red Fort Delhi would be incomplete without Noorjehan or Noorjahan who was Jehangir’s wife.

Salim or Jehangir was a prisoner of her charms and did all that what was told to him by her. He was her virtual prisoner, so the records say.

Noorjehan was the only Mughal empress to have coinage struck in her name. She was often present when the Emperor held court and even held court independently when the Emperor was unwell. The Empress was given charge of his imperial seal, implying that her perusal and consent were necessary before any document or order received legal validity. The Emperor sought her views on most matters before issuing orders.(Creds- Wikipedia)

Noorjehan was already in her 30’s when she married the Mughal Emperor, Jahangir. He was her second husband; her first husband, Sher Afghan, was killed in a duel.

Some people say that he was killed on the orders of Jahangir, who was jealous of Sher Afghan.

Noorjehan already had a child, Ladli Begum who was fathered by Sher Afghan, when she entered the harem of Jahangir.

Sometime after her marriage, Noorjehan and Jahangir ran into opposition from some old Akbar faithful courtiers like Mahabat Khan. The old noble had served Akbar well but thought that Jahangir was unworthy of the Mughal throne.

You will be surprised to know that the Khan was once the Commander-in-Chief of the Mughal Army during Jehangir’s rule. So why did Mahabat revolt against his Emperor?

It is said that many Mughal nobles in Jehangir’s court felt insecure at seeing the rapid rise of this man from Persia. And you know what happens in these cases. Some of the jealous nobles told the Queen that Mahabat Khan was acting pricey and did not respect the royal family.

How to reach Red Fort Delhi– Delhi Metro offers excellent connectivity to this place. You can take a Metro from Rajiv Chowk or any other station in Gurgaon. Get off at the Chandni Chowk Metro Station and take a rickshaw.

You can also take a Metro from Mandi House and get down at the Red Fort Metro station.