Jaipur is the capital of Rajasthan and is also known as PINK CITY. It is the largest city of this state. It is a very famous places to visit in Rajasthan, especially for the unique food, architecture, astrology, Vastu, and many other things. The city is also known as PARIS OF INDIA. On 18th Nov. 1727, this city was founded by Maharaja Sawai Jai Singh. The plan of this city was made through Indian Architecture. Jaipur is also famous for its unique art and craft design. Places to visit in Jaipur are:

Jaisalmer is known as the GOLDEN CITY and also the tourist places of Rajasthan, especially for the yellow rocks that are used in the construction of the whole city. This is the last city of Rajasthan as it touches the Indian and Pakistan border. The shops, houses, ancient Havelis, and hotels are till used by the new generation also. The fort of Jaisalmer had been included in UNESCO, a world heritage site. Places to visit in Jaisalmer are:

If you are very much fond of palaces, then it is the perfect places to visit in Rajasthan, for that. The largest artificial lake of whole Asia, i.e. Jaisamand Lake is also present in this beautiful city. Udaipur is called by many names like “Venice of the East”, “City of Lakes”, “The Most Romantic City of India” & “Kashmir of Rajasthan”. Many people prefer this city for marriage. Udaipur is very famous for its Lake Palace. The amazing experience of soft sounds, beautiful sights, and different images of various poets, writers, storytellers, and painters makes your trip the most memorable of your life. Places to visit in Udaipur are:

This city was founded by Maharaja Rao Bika in 1486. Bikaner is mainly famous for its Bikaneri Bhujia in the whole world. For sweet and snacks lovers, it is the right places to visit in Rajasthan, for that. The best camel ride in the whole world is present in Bikaner, which you must have to enjoy. This city is known as Camel Country. The windows of forts and haveli are decorated with stone screen, which is known as Jharokas, can be seen in Bikaner. “Rajasthan tourism” can be explored by shopping of art & craft, leather items and many new things can be bought there. Places to visit in Bikaner are: Jodhpur is the second largest city of Rajasthan. It was founded by Rao Jodha, in 1459, he was the chief of the Rathore clan. Jodhpur was the capital of Marwar. This city is known as the ‘Sun City’ , because of the bright sunny weather in the city. It is situated at the end of the Thar Desert. It is an elegant places to visit in Rajasthan. Jodhpur is also known as ‘Blue City’, because the old houses of the city are painted with blue color. Places to visit in Jodhpur are:

Chittorgarh is known for the brave and passion of Rajputana. The city was also known as Chittaur, in the last 7th century till the 16th century. It is the right places to visit in Rajasthan, for history lovers. The largest fort of India is present in this city, known as Chittorgarh Fort, which stands at 180 meters high hill and spreads in 700 acres. This city was made by Maurya Dynasty in 7th century. There are beautiful forts and temples in the city. Places to visit in Chittorgarh are:

It is a very famous places to visit in Rajasthan, Mount Abu is the only hill station of this state. As, it is around 475 km away from Jaipur city. As in history, Mount Abu was taken on rent by the East India Company from the Maharaja of Sirohi, to use it as the residence of Rajputana. It is located on the Aravalli Mountain Range and it comes under Sirohi District. Places to visit in Mount Abu are: 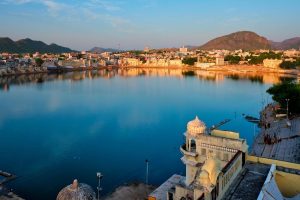 This city comes in the list of ancient cities of India. Pushkar is also known as Tirtha Raj, which means the king of pilgrim sites. Farming of flowers is very popular in the city, because of which Pushkar is also known as The Rose Garden of Rajasthan. These flowers are exported from Pushkar to all over the world. if you are very much fond of camels, then at these places to visit in Rajasthan, the fair of camels is organized every year, in which visitors are attracted by the music, dance, camel riding, camel race and many other things for shopping. Places to visit in Pushkar are:

Alwar is a popular district, as the ‘Rajasthan point of interest’ among international and domestic tourists. Alwar is very famous for (kalakand) milk cake. It is situated in the northeastern part of Rajasthan. Bhangarh Fort, the most haunted place in the whole of India, is also present in this city. Mainly the temperature of the city is not so much hot in summer, but in winter it is cool and pleasant. Places to visit in Alwar are:

Sawai Madhopur was made by Maharaja Sawai Madho Singh on 19th January 1763. This city is mainly known for the Gateway to Ranthambore. If you like to see the wildlife, then don’t miss this “Rajasthan places to visit”. Ranthambore Fort is a part of UNESCO World Heritage site. This city is mainly passed by every ruler like Chauhan Rajput Singh, Govinda to Vagabhatta, and many more. Places to visit in Sawai Madhopur are: