Table of Contents hide
1 The Top 10 Things To Do in Manila
1.1 Visit The Oldest Church In The Country
1.2 Stop For Something To Eat At The World’s Oldest Chinatown
1.3 Watch The Sunset At Manila Bay
1.4 Enjoy The Filipino Delicacy Of Balut
1.5 Jump On The Rides At Star City
1.6 Enjoy Fort Santiago, Manila’s Most Famous Attraction
1.7 See The Luxurious Side Of The City At Makati
1.8 Take Some Time To Relax At Luneta Park
1.9 Try The Delightful Halo-Halo
1.10 Take A Trip To Manila Ocean Park
1.10.1 Related posts:

The Top 10 Things To Do in Manila

Manila is an action-packed city and the capital of the Philippines. There are approximately 12 million people living and working in the capital and the gridlocked roads during rush hour bear witness to this. The backdrop is a mixture of Spanish colonial buildings and high rise skyscrapers. The city is also referred to as the ‘Pearl of the Orient and a few days here will help you to understand what a gem of a city this is.

Manila is also a city that has had more than its fair share of natural and manmade disasters, but nothing can keep this great place down for long! With so much to do let’s take a look at the top 10 things to do in Manila.

During World War II Intramuros was virtually destroyed as the US looked to take control of the city from the Japanese, this was a battle that killed approximately 100,000 Filipinos. After the battle, the only building that was left standing was the San Agustin Church. The church was built between 1587 and 1606 and is the oldest church in the country. It has not just been the War that the church has had to withstand, there have also been seven earthquakes in its time and yet it still stands strong. The church houses a fine collection of antiquities that will give you an insight into the history of this great church as well as the city.

Nearly every major city across the globe has its own Chinatown, but Manila is home to the oldest Chinatown in the world. In 1594 the town was founded as the Spanish moved all the Chinese to this particular area. Today the town is home to many thriving businesses that cater to both the tourists and locals alike. The road signs are often in English and Chinese and many restaurants and technology stores can be found. Despite the Philippines being a largely catholic country, you can still find several Buddhist Monasteries in this part of the city that is worth a look. For those interested in martial arts the legendary Lau Family Hung Kuen Association also has its home here.

Many places around the world claim to have the best sunset, but the one at Manila Bay is right near the top of that list. The bay is a natural harbour and has Manila on its eastern shore and Cavite to the southeast. Manila Bay has a 2-kilometre stretch that you can walk along called The Manila Bay Walk, it runs from the US Embassy to the Cultural Centre of the Philippines. Here you will find plenty of restaurants and open-air cafes where you can soak up the atmosphere of the area and enjoy some live music that is performed on a stage every Friday and Saturday evening. 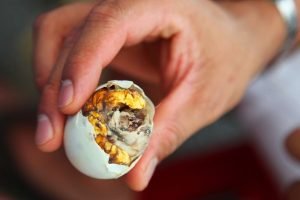 Are you brave enough to try and eat balut? For anyone outside of the Philippines, the thought of eating an 18-day old fertilised duck egg is enough to leave you feeling sick as well as terrified. The dish is often served as street food and is readily available throughout Manila and the rest of the Philippines. When you eat the balut it should still be warm, you open the top of the egg and drink the juices that are inside. Once the juices are finished you should open the shell up and eat the duck embryo. Traditionally the fertilised eggs are taken and buried in sand and kept there for 17 days before being boiled and sold. Sometimes you need a break from the hustle and bustle of Manila and a trip to Star City will make you forget where you are. The 35,000 square metre amusement park has more than enough on offer to keep the whole family entertained for an entire day. There are plenty of rides for each age group including four rollercoasters! The park is also home to the ‘Stat Flyer’ which is the only inverted rollercoaster in the country. When you need a rest from the rides you can eat at one of the park’s many food outlets before getting back to the action. The park is open all year round and regularly has deals. Fort Santiago in Manila is the most famous attraction in this exciting city. It was built by the Spanish as a fortress to defend the city and has had a long and exciting history. Fort Santiago famously imprisoned Jose Rizal who was a national hero in the Philippines before his execution in 1896. The fort today is a shrine to the great man and you can even trace his final footsteps before he was put to death. The area is perfect for picnics and you can sit down outside and enjoy some open-air theatre. With such beautiful architecture and full and interesting history, you can easily spend a few hours getting to know the place.

Travellers from outside of the Philippines will notice that the cost of accommodation and getting around is often much cheaper than they may pay back in their home town. This is not the situation in Makati though, Makati is a classy, sophisticated area where the prices are much more in line with those of a western capital city. Here you will find many upmarket shopping centres selling every luxury brand you can think of at prices that make your eyes water. There are restaurants galore in this part of the city ranging from affordable to high-end fine dining. The area is also the commercial hub of the country and home to the Philippine Stock Exchange so real estate prices and the cost of living are expected to continue rising. 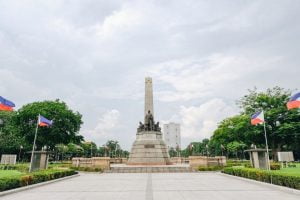 Luneta Park also known as Rizal Park, became famous because it was the place where the Spanish executed Jose Rizal after he was held at Fort Santiago. The park has a very interesting history as the Spanish would regularly execute people here during their reign. There is a monument to Rizal in the park that is guarded by ceremonial soldiers, the landmark has the words “Mi Ultimo Adios” inscribed on the monument which translates to “My last farewell.” There is lots more to see and do in the park including a quiet walk through the gardens, seeing the observatory and listening to open-air concerts. 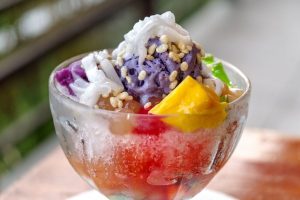 Earlier I mentioned the potential stomach-turning balut, this however is a sweet treat that should put a smile on the faces of all that try it. Known as halo-halo or haluhalo the desert is a mixture of shaved ice and evaporated milk, this then has sweet beans, fruits and jello added to it. The translation of halo-halo means mix-mix and it is easy to see why, as people will mix anything into the desert if they believe that it will heighten the enjoyment of eating it. There are many street vendors that will sell this and it is very well priced so it is worth going around a few sellers to try out different flavour combinations. Manila Ocean Park is an action-packed day out that will give you tremendous insight into life in the ocean. There are daily shows held which include such events as ‘Trails To Antarctica’ which is the first penguin park in the country. You can also experience half body and full body encounters with various forms of sea life, whilst being under the watchful eye of trained instructors. The park also has various shops and restaurants to explore and dine in. In total it covers an area of 8,000 square metres and also includes a 25-metre acrylic tunnel that allows you to view the ocean life from another angle.