Things to Do in Myanmar (Burma).

Shut off from the outside world for over 5 decades.  Burma, officially named the Republic of the Union of Myanmar is located in Southeast Asia. Its bordering countries are Thailand, Laos, India, and China. Nearly half of Burma is covered in dense forests, this makes it a sanctuary for some of the rarest and most exotic wildlife on the planet.  Ranking 24th on the world’s most populous countries list with a population of 63 million makes it the 5th largest country in Southeast Asia. Tourism is really begging to take off and there is a whole wealth of things to do in Myanmar.

In the past, the lonely planet described traveling to Myanmar as ‘problematic’ with the only means of entering by flying, no ATMs, overly complicated visa requirements, and the need for permits to travel in what few states you’re allowed.  However, since 2012 Myanmar has opened its gates to the outside world and the country is booming. ATMs can be found in abundance, getting a visa for Myanmar can be achieved in a few days via post or on the same day at an Embassy.  The Country will become a huge contender on the Southeast Asia tourist circuit so my advice is to get there now whilst it still has its untouched charm. 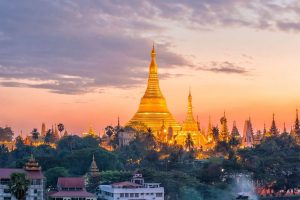 Located in the city of Yangon, Shwedagon Pagoda is an inevitable stop for any tourist who finds themselves in this wild city. Legend has it that Shwedagon Pagoda is over 2600 years old making it not only the oldest pagoda in Burma but also the oldest in the world.  The entrance price is 8,000kyats ($8USD) for a day ticket and I would recommend making the effort to see the Pagoda at night whilst it’s all lit up. Inle lake is the second largest lake in Myanmar. The freshwater lake is located in the Shan State in the Nyaungshwe Township of Taunggyi District.  Over 70,000 locals live around the lake and it borders four cities. Most of the population are devout Buddist living in simple wooden houses, the majority of which are totally self-sufficient and work and live off the lake. If you’d like to read more about visiting Inle Lake click here.

3.) Boat ride from Mawlamyine to Hpa-An. 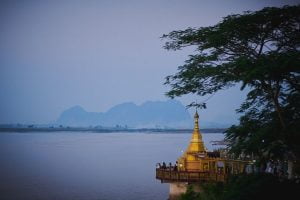 A fantastic way to see some more of the stunning Myanmar countryside. Taking the boat from Mawlamyine To Hpa An is a wonderfully peaceful way to spend 5 hours floating down a river whilst admiring the landscape.

Myanmar’s biggest celebration of the year takes place during the scorching month of April. Temperatures will often be above 40 so it’s the perfect time to have an all on all water fight across the entire country. Normal taboos are lifted and everyone from small children to wise old folk arm themselves with the water fighting essentials to take part in the madness of Thingyan. Click here to read more about Myanmar Thingyan and the water festival.

Trekking in Burma is not only super cheap but also an amazing experience. I personally only trekked from Kalaw to Inle lake over 3 days and I absolutely loved it. The price was 40,000kyats ($40USD) and this got me a guide, 2 nights of accommodation in small villages, 3 meals a day + some snacks throughout the day, and 3 days’ worth of breathtaking scenery. 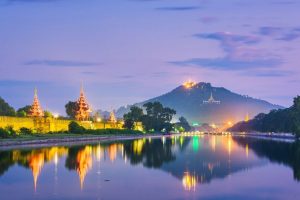 Mandalay is the second-largest city in Burma and has a population of 952,570. Although it’s populated the city is very spacious and you don’t get the feeling of it being overcrowded.  There are over 700 Pagodas in Mandalay and it is known for being Burma’s cultural and religious center for Buddhism.

The food in Burma seems to get a lot of stick but I personally loved it. Food prices are incredibly cheap paying between $0.75 – and $3 per meal. There is a wide range of options available at most restaurants offering not only dishes from Myanmar but also Indian Chinese and western. Bagan was once the capital of the Kingdom of Pagan which was the first kingdom to unify the regions that are now modern Myanmar.  During the 11th to the 13th century when the Kingdom was at its most powerful over 10,000 Pagodas, Monasteries, and Buddhist temples were built in the Bagan alone. Nowadays an impressive 2200+ temples still stand. When people ask me about Things to Do in Myanmar this is always my top recommendation. Indawgyi Lake is the largest lake in Burma located in Mohnyin Township in the Kachin State. The north of Burma has only just opened its gates to tourists and you no longer need permits to travel around. According to the tourist board apparently only 75 foreigners visited Indawgyi Lake in 2013 and this is expected to double for 2014. Indawgyi lake is one of the most peaceful places I’ve ever been and I strongly recommend making the effort to go there.

This is a very cliché end to a list but this is genuinely true. Not once did I feel unsafe or threatened during my time in Myanmar. Everywhere I went people were constantly trying to help just because they are really honest and good humans.  It was so refreshing to not be on guard all the time expecting people to try and scam you. On multiple occasions, I was invited to people’s homes and received incredible hospitality.

FacebookTwitterPinterestEmailLinkedInWhatsApp
Tags: freshwater lake, Things to Do in Myanmar, Trekking in Burma
Search here…
Start your own Website