William Penn designed the city in 1682, and set aside the Center Square for public buildings. However, it took more than 200 years for the square to be used for that purpose. The first City Hall was constructed at 2nd and Market streets then moved to 5th and Chestnut streets when the Independence Hall complex was constructed.

One unique spot to visit is The Oval. Referred to as the “new shape of fun on the Benjamin Franklin Parkway” this new public space transforms an island of asphalt and lawns at 24th Street and Parkway into an eight-acre spot for summer fun. This location is within walking distance of several other attractions, including the Philadelphia Museum of Art, The Barnes Foundation, and The Franklin Institute.

The Oval consists of a painted-over parking lot accented by grassy areas and brightly colored sails. The area also has public restrooms, tables, and chairs. It is dubbed a “pedestrian-friendly urban oasis” that is open Tuesday through Sunday and features a variety of free activities, including entertainment.

Most Artistic Mile in the Country

For those with a love of the arts, there are plenty of attractions in Philadelphia as well. What is referred to as “the most artistic mile in the country” stretches from City Hall to the Philadelphia Museum of Art. The city is home to more than 300,000 works of art and has 10,334 acres of parkland.

A 12-ton granite Sphinx of Ramses II, dating to 1200 BC, is located at the University of Pennsylvania Museum of Archaeology and Anthropology. It is just one of the many museums found throughout the area and each museum has a magnificent display that would spark the interest of visitors of all ages.

The Pennsylvania Academy of the Fine Arts has a masterful collection of American art displayed in the historic City Center building. The Penn Museum displays items that unearth the world’s cultural heritage. The Rodin Museum features the largest display of Auguste Rodin sculptures to be found outside of France while The Barnes Foundation is the new home of the world’s leading collection of French Impressionist and Post-Impressionist paintings.

Other museums include the Philadelphia Museum of Art, which covers more than 10 acres and has more than 300,000 thousand works spanning more than 2,000 years in time. Other attractions include Fairmount Water Works and Interpretive Center and the Ruth and Raymond G. Perelman Building.

Sculptures and Statues in the City 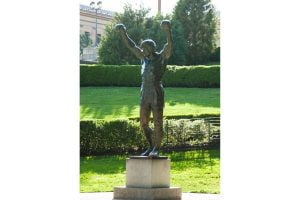 Throughout the city are various sculptures and statues, such as the Rocky Statue, Iroquois, the Giant Three-Way Plug, Joan of Arc, and the Washington Monument.

Philadelphia is home to the Schuylkill River, which is a popular destination for runners and those who just want a magnificent view of the city’s skyline. The 128-mile river is home to historic and diverse recreational and cultural attractions. Love Park, also known as John F. Kennedy Plaza, is located near City Hall and provides a grand entrance to Benjamin Franklin Parkway. The plaza was designed by famed City Planner Edmond Bacon, who is the father of actor Kevin Bacon. Originally, the park was built over an underground parking garage in 1965. It expanded in 1969 adding a fountain and curved granite steps. Robert Indiana’s iconic LOVE statue was added in 1976 and then removed two years later, but because of its popularity, it was purchased by the Chair of the Philadelphia Art Commission and returned to the plaza where it remains today.

No trip to Philadelphia would be complete without good food and there are plenty of eateries to choose from in the city. Philadelphia is also known for its nightlife, with a variety of concerts offered year-round, and for its club scene. No visit to Philadelphia would be complete without seeing the largest municipal building in the country — Philadelphia City Hall.  Taking up 14.5 acres of floor space, City Hall is considered an architectural treasure both inside and out. The exterior is covered with sculptures to represent the seasons and the continents as well as allegorical figures, various heads, and masks. Alexander Milne Calder designed the sculptures, including the 27-ton statue of William Penn that tops the tower. Until 1987, the tower was the tallest building in the city. Its observation deck is open to the public and offers a panoramic view of the city. The birthplace of the Declaration of Independence, the hall is located on the south side of Chestnut Street between 5th and 6th streets. It is open every day of the year, and free tickets are available.

In the summer of 1776, 56 men gathered at the Pennsylvania State House and defied the King of England to write the Declaration of Independence. Eleven years later, representatives from 12 states gathered to shape the U.S. Constitution to create one unified nation. The guided tour, provided by National Park Rangers, begins in the courtroom where lawyers from opposing sides shared tables and law books.

FacebookTwitterPinterestEmailLinkedInWhatsApp
Tags: Philadelphia City Hall, Things to do in Philadelphia, trip to Philadelphia
Search here…
Start your own Website