Top 5 Things to Eat in China Top 5 Things to Eat in China

While dumplings and noodles are what everyone thinks of when talking about Chinese food, Chinese cuisine is far more assorted than that. China consumes the most diverse form of veggies and meats. Each province has its unique understanding of food and shares some commonalities with the neighboring provinces.

Here’s a list of the Top 5 Chinese dishes which you can get your hands on when you visit the country next time. Red braised pork belly or hong shao rou is a classic pork dish from mainland China. It is believed to be one of Chairman Mao’s favorite dishes. The sweet, spicy, sticky, tender dish has a melt-in-the-mouth texture. It is best served over a bed of white rice and vegetables. Tender cubes of pork belly lightly stir-fried, covered in a thickened, spiced and sweetened soy sauce which looks red in color makes it more appetizing. The dish is particularly eaten in Shanghai and Hunan provinces. Century egg is a Chinese preserved delicacy dating back centuries to the Ming Dynasty, made by preserving duck, chicken or quail eggs in a mixture of clay, ash, salt, quicklime, and rice hulls for a long time. The eggs can be eaten without further preparation, on their own or as a side dish. Traditionally the eggs were pickled in brine and then buried in a mixture of chalk, coal, mud, and clay.

In Taiwan, it is popular to eat century eggs by slicing it and placing them on top of cold tofu along with other garnishes. 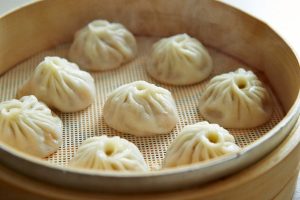 Xiaolongbao is a hot soup-filled dumpling renowned all over the Shanghai province and various parts of China. The dumplings comprise delicious soup with a stuffing of meat or veggies. The popular and most common variant is filled with pork and minced crab meat. More modern variants include other meats, seafood, and vegetarian fillings.

One needs to puncture the dumpling wrapper to let out the steam and then have the soup slowly before eating the meaty xiaolongbao. Mostly people savor them with fresh ginger and tangy dark vinegar. In restaurants, you can also find them served alongside a bowl of clear soup. Chou Doufu is a Chinese form of fermented tofu. There are a few styles in which Chou Doufu is served and each tastes distinct, like, deep-fried, in a hot pot, on a skewer, etc.

Usually, on the streets, chou doufu is deep-fried and then served with a sauce. It is crunchy on the outside but soft and juicy on the inside. Sometimes it is stuck on bamboo skewers and grilled over charcoal. The sauce and garnishes it is served with are specific to the place you buy it from. One can say that it is a form of a ‘stinky cheese’ such as blue cheese. 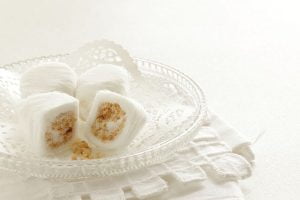 Dragon’s Beard Candy is a traditional Chinese sweet made with sugar and maltose syrup. Its appearance resembles that of a white cocoon or pillow. Sugar is stretched into super-thin strands and filled with either crushed peanut or roasted sesame seeds mixed with sugar. When eaten, the soft wispy strands melt in the mouth and the sweet crushed peanuts add the crunchiness. It is believed that the strands reminded the Chinese Emperor of a dragon’s beard, so thus it was named Dragon’s Beard Candy. The candy was initially created in China, but soon became popular and spread to other parts of East Asia in various forms.

Chinese cuisines incorporate a number of diverse spices, meats, and veggies. While one can feel a sense of unease when trying a fried scorpion, he can surely find multiple other options to satiate the hunger pangs.