Situated in the northeastern part of India, Sikkim is a small state surrounded by Himalayan mountain ranges and valleys but attracts everyone with its amazing natural beauty. many magnificent hill stations near Gangtok where tourists can make their holidays and honeymoon memorable, it is rich in many waterfalls, lakes, and rivers. Between the natural splendor and the humble culture of Sikkim, one must spend some splendid moments of a lifetime.

Tourists can undertake many adventurous, thrilling, and recreational activities at the hill station of which trekking and cycling are among the major activities. Apart from this, there are many historical Buddhist monasteries and temples which show spirituality and purity in the environment. Tourists can enjoy the brilliance of nature and enjoy mesmerizing views by visiting the best 8 hill stations near Gangtok. Lachen is one of the best hill stations near Gangtok, the scenic beauty and serene calm surrounded by snow all around Lachen make it a great destination. Lachen is also known for pastures from alpine grasses at an elevation of 8838 feet above sea level. Apart from this, the population of Lachen is much less, therefore there is much peace compared to the city, due to which tourists prefer to come here and Lachen is a popular destination for Buddhism.

Snow-capped hills and lush grasslands with lush vegetation and apple orchards provide tourists with excellent opportunities for trekking. There are also spiritual places like Gurudongmar lake, Tsomo lake, and Lachen monastery near Lachen, which visitors must visit. Aritar, a small hill station known for ancient beauty, temples, and monasteries, was established under the Rangoli subdivision. There are many attractive waterfalls, beautiful lakes, and lush green forests that make it one of the most popular hill stations near Gangtok. The mesmerizing natural scenery around the surroundings attracts a large number of tourists.

You must visit Arritar to spend some time away from the crowded and noisy life of the city in a relaxed and quiet environment with your family. Que Khola Falls and Lumpokhari Lake etc. are the major attractions near Aritar.

Pelling is another popular tourist destination in the western part of Sikkim, located in another attractive hill station. Here tourists can undertake adventure activities like mountain biking, rock climbing, and trekking, apart from this, at the height of 6800 feet above sea level in the Kanchenjunga range, the Pelling is surrounded by dense jungles from all around, and Kanchenjunga with the nearby Pemyangtse and Sangacholing monastery. The waterfall is a major attraction. The calm, picturesque environment and adventurous activities of Pelling make it one of the best hill stations near Gangtok among tourists. Located just a short distance from Geising Pelling is one of the magnificent hill stations near Gangtok, GeyZing is very popular with its spiritual atmosphere and image. GeyZing at an altitude of 6500 feet above sea level, the inhabitants of the Nepalese caste live in large quantities due to which the influence of Nepali culture and architecture is also seen here. Along with this, GeyZing is also a commercial city in West Sikkim. Tourists can also visit nearby monasteries, temples, and markets and buy Nepalese handicrafts and souvenirs. 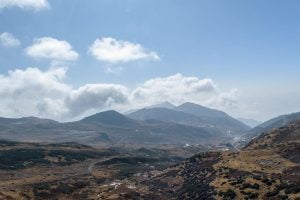 Nestled amidst lush green trees and snow-capped mountains, Mangan, the capital of North Sikkim, is one of the best hill stations near Gangtok for visitors who love nature. Mangan is surrounded by white snowy peaks and beautiful flowering shrubs that are sparsely populated and inhabited by many Buddhist seekers.

Shingba Rhododendron Sanctuary near Mangan is the best place to see the Labrang Monastery, besides Mangan’s market where tourists can shop for local handicrafts and items and enjoy traditional cultural songs, dances, and food.

Situated at an altitude of 6000 feet above sea level in western Sikkim, Yangtey offers amazing views of Kanchenjunga, many of the ancient monasteries, and amazing examples of art culture. Yangtey has many spectacular attractions including Khechopalri Lake, Rimbi Waterfall, Pemyangtse Monastery, and Severo Garden. Khachapuri lake is considered very sacred by the followers of Hinduism and Buddhism. Tourists must also spend some time at the nearby Tashing Resort. Yangte is one of the most beautiful hill stations near Gangtok.

Gangtok, being the capital and political headquarters of Sikkim is a destination with a pleasant climate and a calm atmosphere. Gangtok, situated at an altitude of 5410 ft above sea level in the foothills of Kanchenjunga, the world’s second-highest peak, is known for its amazing natural scenery and monasteries. 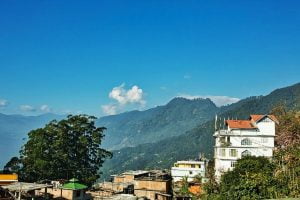 Yuksom is famous worldwide for its astonishing beauty, Yuksom is a quaint village covered with greenery and vegetation near Kanchenjunga National Park. Apart from seeing natural beauty, tourists can also do many adventure activities. There are many tracks on which tourists can do trekking and other adventurous and exciting activities.

Yuksom is also known as heaven on earth and the third eye of Sikkim, in addition, Yuksom also has significant religious and historical importance in Sikkim as in 1642, the first Chogyal reached the Yuksom with the crown and at this time the capital of Sikkim was the Yuksom. Thi and many religious sites like Lake Khechapuri, Dabdi, and Sangochelling Monastery are also located in Yuksom.

Without visiting the hill station in Sikkim, your journey is incomplete, tourists can get mesmerized by the beautiful beauty of nature and get to know the local culture quite well. Apart from this, many hill stations can also do adventure activities like trekking and climbing. Tourists can make their journey exciting and entertaining by visiting the top 8 hill stations near Gangtok, which will give you a lot of experience.

What are the best hill stations near Gangtok?

Pelling, Lachen, Lachung, and Yuksom are the best hill stations near Gangtok.

Eco Lodges Around The World

The Gem of Northern Queensland

Top 7 Places to visit in Katra