5 Places One Must Visit Near Papi Kondalu, Andhra Pradesh 5 Places One Must Visit Near Papi Kondalu, Andhra Pradesh

The natural beauty, peaceful atmosphere, cool climate, and serenity of the surrounding hills of Papi Kondalu attract many people to experience the place Papi Hills, the recent name given to Papi Kondalu is a beautiful pass of the river Godavari in the state of Andhra Pradesh. Papi Kondalu, derived from the Telugu word, Papidi, roughly translates to the word ‘Partition’. It is a mythological belief in the epic Ramayana, that Lord Ram and Lady Sita visited this gorge during their exile of 14 years. This scenic place is a favorite tourist destination and the 5 places mentioned below are a must-visit whenever you plan a trip to Papi Kondalu.

This ancient temple is located on the banks of the river Godavari in the village of Gondaru. The Goddess Gandi Poshamma is seated here. You can reach Gandi Pochamma temple in about 20 minutes from Rajahmundry, which is around 18 kilometers and the distance between the village and Polavaram is a mere 5 kilometers. You can reach here by boat too. There is a small market leading towards the temple, where you can shop.

Spread over a massive area of over 1013 square kilometers, this national park is shared between the districts of Telangana and Andhra Pradesh. Papikonda Wildlife Sanctuary was established in the year 1978 but got its official title of ‘National Park’ in the year 2008. The rich and natural beauty and plantations provide a nourishing habitat to the different species of animals and birds here. Mammals seen here include wild buffaloes, deer, bison, antelopes, tigers, leopards, and local and migratory birds. The water of Godavari flows through the dense forests providing refreshing water to all. This national park was formerly called Kishkinda, the mighty ‘Kingdom of Apes’, who helped Lord Ram build the bridge to Lanka, in the epic Ramayana. 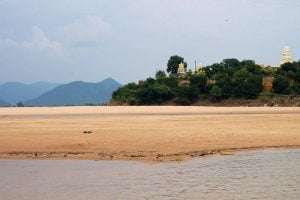 Famous for the temples of Shri Veerbhadra Swami and Shri Bhava Narayan Swami, dedicated to Lord Shiva and Lord Vishnu respectively, this island is a frequented pilgrimage center. It is located at a distance of 30 kilometers from Papi Kondalu. This place is also known as Pattiseema and is significant as the place where Lord Shiva’s sword fell after he killed his wife Lady Sati’s father, Daksha. The temple of Lord Vishnu was built in the 11th century by the ruler of Avuku, Lord Nalaparaju. The scenic beauty in and around the place is used to shoot many scenes from Telugu movies. During the festival of Maha Shivratri, around 1 lakh people come here to seek the blessings of Lord Shiva.

Located at a distance of 80 kilometers from Papi Kondalu, this is a historically significant temple for Hindus devoted to Lord Shree Sita Ramachandram Swami. This temple becomes the main venue of celebrations during the festival of Ram Navami, a fanfare that happens annually to celebrate Lord Ram and Lady Sita’s marriage anniversary. This temple was built by Gopanna, the Tehsildar of Bhadrachalam in the year 1674. He was a religious man and was very sympathetic towards the less fortunate in his village. The small hill upon which the temple lies is surrounded by the pious river Godavari. The trip to Undavalli caves will take a one-day drive from Papi Kondalu. The distance is 168 kilometers but trust me, it is worth your time. Excellent examples of ancient Indian architecture, these caves are testimonials to Vishwakarma Sthapathis. Vishwakarma is believed to be the ‘Principal Architect of The Universe’, according to the Rigveda. These caves were believed to be formed in the 5th century out of sandstone. The largest cave consists of four stories and has a marvelous statue of Lord Vishnu resting, formed out of granite on the 2nd story.  The cave primarily shows signs of Buddhist and Jain structures. The caves stand on a hill, facing the river Krishna.

The natural beauty, peaceful atmosphere, cool climate, and serenity of the surrounding hills of Papi Kondalu attract many people to experience the place. It is a thriving tourist destination and picnic spot. Ever Best Tips for the Finest Cruise

Rest and Relaxation in South America