There is nothing more amazing than the power of rushing water, and what sight could be more beautiful than a waterfall? The world’s most beautiful waterfalls range from rushing torrents to more delicate streams of water among beautiful foliage. These timeless beauties are among the best in the world. Measuring 2008 feet in height, this beauty has a high volume of water rushing across 250 feet. One of the most impressive waterfalls of Norway, Langfoss has not been used for any form of hydro production, making it a rare, untapped beauty. 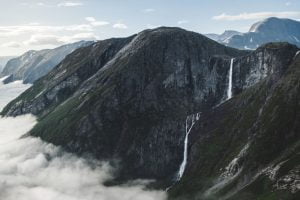 One of the tallest waterfalls in the world, this Norwegian beauty has two major falls as well as a section of cascades near the base. Since it is tapped for hydro production, the falls only run naturally between June 20 and August 20 – the tourist season. A glacial melt, the Takakkaw Falls in British Columbia falls 853 feet between two sections of cascades. The total height of the falls is estimated to be roughly 1250 feet of water falling from the Daly Glacier through the Rocky Mountains. A hidden wonder, this waterfall was only recently brought into the common knowledge of travellers and waterfall enthusiasts. Measuring 2,531 feet, Gocta Catarata moves from a medium to a high pressure falls, and was only documented by a camera for the first time in 2002, when the falls were brought to the attention of the Peruvian government. Measuring 1904 feet, Sutherland Falls has a well-established reputation around the world for it’s impressive beauty. The falls come from Lake Quill, a glacier lake. The waterfall has three steps measuring up to 815 feet each as the water tumbles down. A hidden wonder until just recently, Hanging Glacier is one of the best waterfalls in South America, but nobody knows how tall it is or has even attempted to measure the waterfall. It is estimated that water pours down anywhere from 1,400 to 2,000 feet through the Queulat National Park.

Once known as Utigardsfossen, this waterfall drops 2,685 feet total through cascades and horsetails. A high volume of water pours through this waterfall throughout the year making it one of the most impressive falls in the world.

One of the most impressive waterfalls in Europe, Gavarnie Falls is the tallest in France. The falls are located in the central Pyrenees Mountains and the water rushes 1384 to the ground after seeping from the lake through limestone.

A tiered waterfall in Switzerland, you can enjoy this two-staged beauty from a tram that has been constructed to travel over the falls from the base to the top. With two horsetails dropping about 1,640 feet all together, this waterfall is worthy of its distinction in Europe. The tallest waterfall in Italy, Serio Falls is located in the Lombardy region and rushes down the mountains only five days out of the year. The waterfall has been tapped for hydro production and is dammed except on June 20, July 18th, August 22nd, September 12 and October 3.

Located in Washington State in the North Cascades National Park, the Sulphide Creek Falls is runoff from two large glaciers. The water of the falls runs down 1,000 feet of the mountainside into Sulphide Lake and then goes another 2,100 feet through the actual falls.

Right on the border between Zambia and Zimbabwe, this fall is far wider than it is tall. Measuring 350 feet in height, but 5,700 feet in width, this impressive block fall has four major portions. On the border between Brazil and Argentina, the access to the falls is located in Brazil, while the bulk of the actual moving water is in Argentina. The wide, rushing falls measures a width of 8,858 feet and is best known for a section called the “Devil’s Throat”. 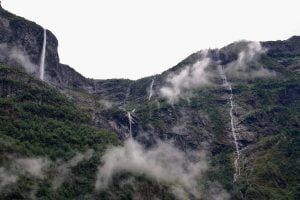 Another of Norway’s impressive waterfalls, this one has a total height of 2,477 feet with a single drop of 490 feet. This height has never officially been established, however, and this waterfall is often contested among the tallest in the world. A sheer plunge of water measuring 2,211 feet, the falls are located in the eastern part of Venezuela, near Guyana. The waterfall is often called one of the tallest, but is, in fact, not in the top five tallest waterfalls in the world.

This impressive waterfall is measured at a total height of 2,200 feet. The second tallest in Venezuela, the falls has a plunge that occurs in sections as well as a section of cascades. One of the most famous waterfalls in Mexico, and possibly the tallest, the falls send water rushing down 1,023 feet of sheer drop in a giant horsetail. A large rock arch at the top of the falls helps to add to the height of this fall. A final Norwegian fall to round out the list, this waterfall is a 1,837-foot drop in a horsetail. The falls originate in the Brisdale Glacier and are easily seen from a very popular picnic area near the foot of the falls.