Things to do in Beijing Things to do in Beijing

The ever-popular Beijing attracts a multitude of visitors from far and wide, attracted by the rich variety of things to do and see in an exciting city that mixes ancient traditions and modern facets. It is a fantastic city to visit at any time of the year, and there are literally hundreds of things to do in Beijing.

If you only have a few days, the top things to do in Beijing include: The huge public square can boast of being the biggest such place in the whole entire world. It is a popular meeting spot and so is always a hive of activity. The Chinese national flag is raised and lowered every morning and evening, with a grand ceremony performed by guards. It is surrounded by interesting buildings, including the Gate of Heavenly Peace, the Great Hall of the People, the fascinating National Museum of China, General Mao’s Mausoleum, and the tall Monument to the People’s Heroes. General Mao’s large portrait watches over the square. The ancient capital city manages to inspire awe and create wonder in visitors, just as it has been doing for many, many years. Formerly off bounds to regular citizens, the Forbidden City is home to numerous stunning buildings, detailed sculptures, entrancing gardens, and hypnotizing pools. Surrounded by huge walls, it is a top place to visit on any Beijing trip. 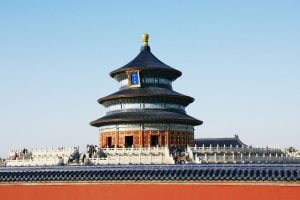 The spectacular and revered Temple of Heaven is a very important place in the city. As well as the magnificent temple itself, you can enjoy the old tree-lined gardens as you watch the hubbub all around; the mornings are especially great when you can watch people appear to practice Kung Fu and Tai Chi, as well as those who want a more relaxing time playing cards, mahjong, and music. Used as a sacrificial site for mighty emperors of the Ming and Qing dynasties, there are several different alters throughout the temple.

The Great Wall of China

Several sections of the iconic Great Wall of China can easily be visited from the country’s capital city. The stretch at Badaling is one of the most popular spots, but this also means that it can be very crowded. It is well worth considering a trip to a different section though – it will still be busy, but probably will be a little less cramped. Climb onto the imposing wall and walk through what is often referred to as the largest cemetery in the world! You can also enjoy the sweeping views.

Other terrific things to do in Beijing in only a few days include a trip to the sacred Ming Tombs, a visit to the enormous Summer Palace, and seeing the soaring New CCTV Tower in the Central Business District.

With more than a few days, you can take in even more of the great Beijing sights. These include: The old housing areas, known as hutongs, provide a glimpse of the Beijing of yesteryear. Pedicabs still carry fares around the twisting and turning streets, and many homes still share communal washrooms and toilet blocks. A climb to the top of the Drum Tower or Bell Tower provides a bird’s eye view of the area. A magnificent and ornate Buddhist temple, Lama Temple is a breathtaking place. Steeped in history, it is well worth visiting if you have some extra time in Beijing.

The modern market on Xiu Shui Street is just as intriguing and lively as the now-demolished ancient market that previously met the demands of eager shoppers. With over 1,500 stalls spread over five floors, it offers a fantastic insight into the Chinese way of life. You may also be able to pick up some terrific bargains!