When it comes to extremes, no one does it quite like Death Valley National Park, the largest of the U.S. national parks in the lower 48. This was a park I heard about frequently as a kid in Ohio, and I’ve always wanted to visit. It sounded like a completely alien land to this Midwestern girl.

The reality wasn’t too far off The size alone is daunting, and that’s nothing compared to the soaring temperatures, vast salt flats, and incredible (lack of) altitude.

Tara and I decided to head to Death Valley on a whim, needing a break from cell service and time to focus on what we do best…adventuring together. I was returning from three weeks of solo travel for work and Tara was on her spring break. After a few months of relatively little travel together it was exactly what we needed to reconnect.

A trip to Death Valley is a trip into its geologic history. There’s a detailed description of the various geological formations on the official Death Valley website, but the real question I had was about the extremes. The extreme depth, the extreme heat, the extreme lack of moisture. What caused Death Valley to become so barren?

The answer, it turns out, comes in part from something called a rain shadow. Death Valley National Park is only about 170 miles due west of the Pacific Ocean, but between the two lies three mountain ranges. When cool, wet weather blows in off of the ocean, the westward side of the mountains soaks it up. Any remaining moisture gets passed onto the next mountain range.

With three ranges acting as a filter, there is little water left for Death Valley. This results in average annual rainfall of 2.36 inches and temperatures that can average 115 Fahrenheit in the summer.

Add in some tectonic movement, volcanic activity, and serious erosion and you get a sinking valley floor filled with salt flats, rising mountains, and vast alluvial fans (collections of rock debris that look like a fan, spilling off the higher elevations). 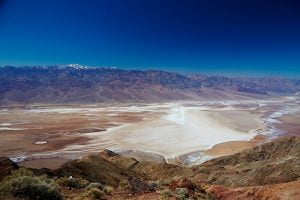 In two days you can easily hit up all the popular spots, which is exactly what we did. Since it was our first trip we stuck to smaller, shorter hikes and scenic drives, getting a sense of the park’s layout. There are two main ‘town’ areas that we visited–Furnace Creek and Stovepipe Wells. Of these, Furnace Creek is the closest to some of the more famous sights and was our jumping-off point for most of the trip.

You can hit all of the highlights below without trouble, though we do recommend tackling the hiking trails early (before the sun really hits hard!) and bringing plenty of water.

About a mile south of the Furnace Creek Visitor’s Center you’ll hit a fork in the road. Here, you have two options. You can continue down 190 to Zabriskie Point and Dante’s View, or turn right to reach Badwater Basin. The latter was our end goal–the lowest point in North America. Along the way, there are a number of stop-off points. Rated moderate, this is one of the most popular hikes in the park. The majority of this 3 miles (round trip) hike is flat, and it comes with a little shade from the canyon walls (depending on the time of day). After about a mile and a half of hiking, you’ll reach the sheer, rust-colored walls of the Red Cathedral. To get to the top is to reach a stunning view of the valley, but it does require a bit of a scramble. This scenic drive is a slight detour from Badwater Basin and doesn’t require any moving from your air-conditioned car (unless you want to, of course!). As you wind through the different rock features it looks like a painter went a little nuts. Red and green and purple hues color the rocks, changing by the hour as the sun moves across the sky. We went here during the late morning when the colors were at their least dramatic, but an early morning or late afternoon visit is likely stunning! When I first saw the sign for “Devil’s Golf Course” I scoffed. Who would come to Death Valley to go golfing!? Crazy people!

Curiosity got the best of us, and we turned off to take a peek. I quickly realized my mistake: This was no normal golf course. About a mile down a dirt road, the turnout ends at an endless field of rock salt–a course only the devil could love. This beautiful salt pan is the result of leftover mineral deposits from what was once a lake. With no water to be found, the wind is left to do its work, carving out the salt.

Feel free to get out of your car and explore a little, but be careful! The salt crystals are jagged and uneven, and it would be easy to twist an ankle. Continuing towards Badwater Basin, the next stop we made was at Natural Bridge Canyon. This is a half-mile hike to a (surprise!) natural bridge. Unlike the wind-worn arches you see at Arches National Park, this bridge came about through water erosion. In fact, as you hike to the bridge you can see smooth areas of rock where waterfalls used to tumble into the canyon.

Once you get to the bridge, you can continue on for an additional half mile or so. There’s some really interesting geology back here (including the ‘turtle shell’ shelf rock rising from what was once the bottom of a riverbed), but be careful if you choose to climb! Many of the rocks are so smooth that it’s easy to lose your footing. 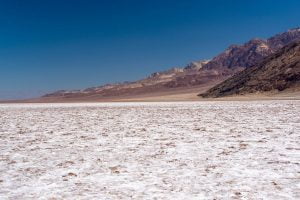 Finally, we made it! Badwater Basin, an expansive salt flat that marks the lowest point in North America. Sitting at 278.9 feet below sea level, it was a sight to see.

Well aware of the rising temperatures, we made it a short hike out onto the flats, spending just enough time to snag a few pictures.

This was, by far, one of the most populated places in the park. I also found it astounding how many people there were dressed inappropriately for the weather and terrain. Girls in high heels and short dresses, guys bearing only flip flops and massive sunburn lines. Entire groups with one bottle of water between them.

Guys. Please don’t do this. What might seem like a good idea from the comfort of an air-conditioned car, hotel room, or RV is not going to stand up to the ravages of nature. Bring water. Wear sunscreen. Dress appropriately. Heading south from the Furnace Creek Visitor’s Center, you can take 190 past the resort (ignoring the split to Badwater Basin) and to Zabriskie Point. We did this at the end of our day, catching a spectacular sunset over the badlands. Unfortunately, I only had my phone with me, so the photographic evidence doesn’t quite catch its brilliance!

It’s a short .25 mile climb to the lookout, all paved. From the top, it’s quite open and windy, and it allows for some stunning 360 views. Going north from the Furnace Creek Visitor’s Center will take you past a few interpretative trails (Harmony Borax Works and Salt Creek Interpretive Trail). We didn’t end up stopping at either, but they’re close to the road and don’t require much walking. Instead, we stuck to 190, headed towards the village of Stovepipe Wells.

About ten miles in, you’ll reach a turnoff to Scotty’s Castle and Ubehebe Crater. You can turn right to access these more northern regions of the park, or continue another nine miles to the Mesquite Flat Sand Dunes.

These dunes are the result of the wind that battered us throughout our trip. Colossal piles of fine grain sand, dominating this corner of the desert. You can hike freely among them, and the visitor’s guide recommends visiting them under a full moon (which we didn’t do, but sounds amazing!)

After exploring, you can continue onward to Stovepipe Wells, a small town with a general store, restaurant, and saloon. Don’t forget to stop at the marker, noting the spot where westward settlers burned their wagons and set out on foot. Turning north, it’s a long drive to Ubehebe Crater (a good 35 miles) and a big altitude gain. It’s much cooler up here, out of the valley, and there are several hikes around the crater (you can even hike to the bottom!).

I’ve been to a number of volcanoes, including Vesuvius in Italy and Bandera in New Mexico (which also had an ice cave!), but Ubehebe is a little different. It’s not a volcano in and of itself; rather it’s a crater that formed as a result of magma hitting groundwater and exploding.

I’m sad to say I’ve only used my new tent a handful of times since buying it over a year ago (Tara, on the other hand, lived in it for three weeks while doing fieldwork in Utah). Since I’m seriously in love with this tent I was excited for the opportunity to spend a few nights in it.

We had the good fortune of arriving at the campground in the midst of a two-day windstorm (fun!). With such wide, open spaces this isn’t uncommon, and it certainly put our ability to set up camp to the test! We opted for the rainfly, but the wind quickly eliminated those plans. No-fly meant less rocking and rolling (speaking of rocks, we definitely pulled some inside the tent to weigh it down).

BONUS: From low to high, a visit to Mount Whitney

After two days of exploring the lowest point in North America, it was only a short hop to one of the highest. We left Death Valley by going north on 190, past Stovepipe Wells. This was the opposite direction from entering and gave us the opportunity to see the towering sets of mountains that create Death Valley up close.

The most imposing of these are, of course, the Sierra Nevadas. And a mere hour’s drive from Death Valley to Lone Pine puts you right in the shadow of the largest mountain within this range: Mount Whitney. After triple-digit temperatures, it was quite an adjustment to be staring at this snow-capped peak while shivering!

When traveling to extremes, prepare for extremes

Death Valley National Park is a fascinating landscape, filled with unexpected features, but it isn’t one to be taken lightly. Plan your visit carefully, from the time of year to the clothes you wear and be ready to change those plans if need be.

And, like anywhere, take time to appreciate the natural beauty while leaving it unmarred. Tread carefully, pack out what you pack in, and don’t forget to take some time to revel in the sheer magnitude and beauty of the experience.