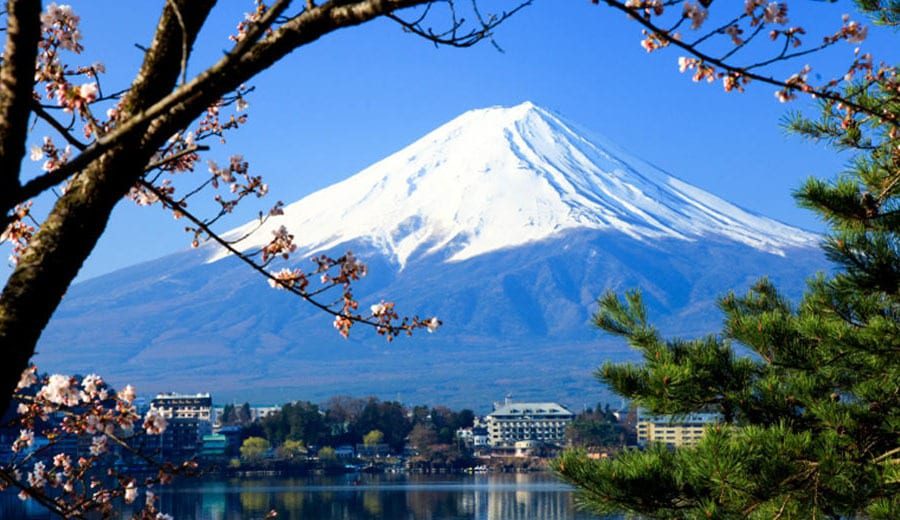 Table of Contents hide
1 Mount Fuji located on Honshu Island in Japan the most prominent mountain in Japan
1.1 Related posts:

Mount Fuji with 3776 meters, is situated on Honshu Island and is the highest and the most prominent mountain in Japan.  It is standing tall as a dormant volcano which erupted last in the year 1707. However, many geologists have differed saying that it is still in its active state. Mount Fuji is considered as an object for pilgrimage by many artists and poets and has inspired many creations by them. Many people climb to its top during the summer months too. It is one of the three holy mountains of Japan along with Mount Tate and Mount Haku. This marvelous and historic place of scenic beauty is listed in the World Heritage Sites of UNESCO.

Thia is located near the Pacific Coast of Honshu, which is on the west of Tokyo. It stands on the border between Yamanashi and Shizuoka Prefectures. On clear days, it can be seen from Tokyo and Yokohama. On a train trip from Tokyo to Osaka, you can also enjoy the enchanting view of Mount Fuji from around Shin-Fuji Station on the right side of the train. Clouds often lead to poor visibility of Mount Fuji. So, consider yourself fortunate, if you can get a clear view of Mount Fuji. Visibility is better in the colder seasons, especially in the early hours of the morning and late evening hours.

If you want to cherish the beauty of Mount Fuji from a more leisurely pace and from a wonderful surrounding, you should either move to the Fuji Five Lake (Fujigoko) region that consists from east to west, Lake Yamanaka, Lake Kawaguchi, Lake Sai, Lake Shōji, and Lake Motosu. All were created by the damming effects of lava eruption, or to Hakone, a hot spring resort there. Yamanaka, the largest of the lakes also has many popular resorts. Mount Fuji is open for climbing offering several routes for the same. Mount Fuji is surrounded by temples and shrines. There are shrines even at the edge and within craters. Women were not allowed to climb it till Meiji Restoration in 1868 happened.  Earlier, it was a system to wear the white robes of a pilgrim. Today we find crowds of people flocking there, mostly during the climbing season from July 1 to August 26. Generally, climbers start their journey from the night in order to reach the summit by dawn. The area has abundant groundwater and streams which also helps in the operation of paper industries, chemical industries, and farming. Other activities include the cultivation of rainbow trout and dairy farming.

There are mountain huts that allow climbers to rest. They provide paid toilets, food and water, and other climbing provisions. Mount Fuji is divided into ten stations. The first station is at the foot of the mountain and the last near the summit. There are paved roads till the fifth station.

This is a distinctive feature of the geography of Japan. It is popular for both adventure trips and also for leisure and relaxing one. The experience to witness Mount Fuji in life is truly very rewarding.