Famous Music Festivals in Europe to Keep you Tuned up

Music & Europe has a historical touch that has laid the foundation for some of the best electronic music festivals. While the ultra-grand Tomorrowland is always on the top of the sheets, there’s no scarcity of other amazing events spanning every corner of Europe.

It doesn’t mean that you have to be a fan of techno or house, experimental or bass, EDM or electro, but yes once you attend any of the festivals, you’ll surely turn into a die-hard fan. Yes, we guarantee it! Doing just to its name, Ultra Music Festival is truly ULTRA. What are the reasons? Well, firstly it’s a world-renowned lineup of DJs like Marshmello, David Guetta, Afrojack, DJ Snake, and other known DJs, and secondly for an all-out party atmosphere. Each year thousands of people pack in Split to hear the biggest names in hip hop and industry play their pumping tracks. Since its debut in 2013, the festival has hosted hundreds of thousands of dance fans from more than 75 countries, making the festival a truly global spectacle. Taking place every year since 1999, Oya Festival has gained its name as one of the most notable cultural events in the nation. Since 2014, Toyen Park has been the location for the festival. Who performed at this festival? Starting from Kanye West, The National, Aphex Twin, Tool, PJ Harvey, and Outkast, the list is enormous. Although, the Oya Festival shines with its stacked lineup, what does it outshine for? It is also one of the greenest festivals around the globe, and the credit goes to no other but the gorgeous natural beauty of Norway. 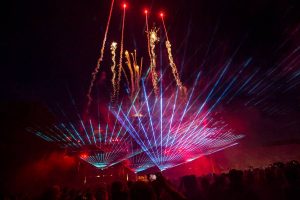 An iconic Dutch brand, Awakenings Festival has celebrated more than 2 decades of spectacular lineups and superb effects for its hoards of European techno fans. Being a relative elder statesman of the electronic festival of Europe, it is expected to be grand, and guess what? It never disappoints. With eight stages for two consecutive days, the techno music keeps going on and on. This year’s Awakenings lineup is yet to be announced.

If we had to name one festival which doesn’t need to spend a single penny on its marketing and still all tickets are sold out every single year, Sziget festival would be one such musical mayhem. Last year there was a massive lineup of renowned artists like Ed Sheeran, Twenty One Pilots, 1975, Foo Fighters, Jungle, Catfish, and the Bottlemen, and this year you can expect the same or even better! and the best part is, that Budapest makes an incredible host city.

Taking over the city of Barcelona for a weekend with its experimental music from an unparalleled range of styles and genres, Sonar Festival is a masterpiece when you ask the Spaniards as well the travelers who have visited it. Making it grander this year with Gorillaz, Diplo, and LCD Soundsystem as the headliners, Sonar boasts clubs, bars, rooftops, and poolsides welcoming music fans and industry professionals to make a cosmic connection standing united in one place.

Indie King and a massive fanbase of new music, Primavera Sound rightfully flaunts itself by pushing the other side of the music festival into the spotlight at such a grand level. With paramount creativity and headliners like Lana del Ray, Cigarettes After Sex, DJ Shadow, and Khaled, Primavera Sound is a standout when talking about the best music festivals in Europe.

With an immense fan base of artists like Paula Temple, Jennifer Cardini, Daniel Avery, and Four Tet, Nuits Sonores is a gallic showcase of underground electronic music. In 2018, Nuits Sonores celebrated its 16th edition, and it was fabulous. The art galleries, clubs, industrial wastelands, and rooftops of Lyon play host to an exploration of music as well as arts, not just during the day but in the nighttime with famous DJs co-curating their own lineups.

Stacked with lineups of huge names in the electronic music industry like Nicky Romero, Da Tweekaz, MC Villian, Dimitri Vegas, and Don’t Let Daddy Know cannot be left out when talking about the best music festivals in Europe as well as in the world. Hypnotizing stage design, high octane partying, booming beats, and of course the energetic crowd, DLDK has quickly grown into a global brand. Spreading a family vibe all over the world, DLDK contributes to the tourism of the Netherlands due to its popularity. If you love which we know you do, Don’t Let Daddy Know is your zenith for the cosmic get-together.

Around the end of August each year, Mysteryland opens its grounds for a weekend close to Amsterdam. Guess what? It’s the oldest dance music festival in Holland and has been around since 1993. A breadth of genres, the fun Dutch crowd, and a beautiful green venue are a few of the many things that will make you fall in love with Mysteryland.

Europe has always been every traveler’s dream destination, and these music festivals have been the constant aggregates for developing these feelings to grow stronger. True?