The most popular attractions in Thailand (other than the food) are the many temples scattered throughout the country. There are over 40,000 Buddhist temples alone, plus many Hindu temples, as well. With so many temples to see and visit, the sheer number of options can be overwhelming! If you’re looking for a shortlist of the best temples for tourists, or if you’re just curious about Thailand’s most interesting temples, then you’ve come to the right place. Here are 12 awesome temples that you can’t miss when you visit Thailand. This temple is revered as the most sacred temple in all of Thailand. It houses the famous Emerald Buddha, a 500-year-old statute that is actually made of a single jade stone. This Buddha is said to bring prosperity to whatever country it is located within, and only the king and crowned prince are allowed to touch it. The presence of the Emerald Buddha makes Wat Phra Keaw an extremely important site, and it has been decorated opulently to reflect its significance. In English, Wat Arun means the Temple of Dawn. It is named after Aruna, the Hindu god that is associated with the rising sun. The temple is built to reflect the first rays of dawn, a sight that is worth rising early to see. This temple is located in Bangkok, on the banks of the Chao Phraya River. It is about 400 years old, although extensive work to architecture was done around 200 years ago. 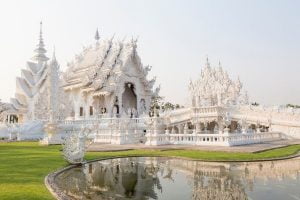 Known as the White Temple, this beautiful structure is strikingly modern. This is unusual for Thai temples. The temple is privately owned and is both an offering to Buddha and a work of art. The temple is beautiful, but it is far from finished—the owner, who has already spent over a million USD on the project, expects to finish it in 2070. Each of the intricately adorned structures has special significance and meaning to the Buddhist religion. This temple, seated majestically atop the mountain Doi Suthep, is brilliantly golden. Although the temple was originally built in the 1300s, there have been many shrines added over the years. According to legend, the temple was built after a white elephant carried a relic from the bones of Buddha to the site. Wat Suthat, a Hindu religious site, is one of the ten temples of the highest grade in Thailand, although not one of the oldest. The temple was built in 1847, and it is constructed with vaulted red roofs and white pillars. Although this temple is famous in and of itself, it is the red swing out front that attracts many visitors. The swing is many decades older than the temple, and it was once used in religious ceremonies. 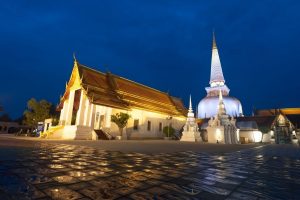 This temple is one of the ten Thai temples to boast top-class status. Wat Mahathat Yuwaratrangsarit houses the oldest Buddhist university. In 1889, it began as a university for the training of Buddhist monks and in 1997, it became a public university. The temple is characterized by long, white walls and golden ornaments. 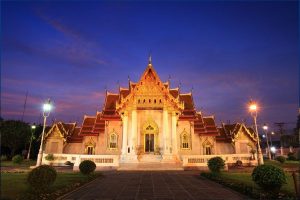 This is one of the loveliest temples in Bangkok. It is often called the Marble Temple, and it is a beautiful example of the traditional Thai stepped-out roofs and golden architectural accents. Construction on Wat Benchamabophit began in the last year of the Nineteenth Century. True to its name, the temple is constructed almost entirely out of marble. 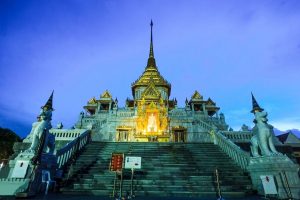 This temple, a historic building, is also called the Temple of the Golden Buddha. It houses the world’s largest golden Buddha, making it one of the most internationally famous temples in Thailand. At five and a half tons, this Buddha is an imposing figure and draws thousands of tourists from across the world. In the historic district of Chiang Mai, you’ll find this beautiful temple. Although there were once three temples on the site, today there is just one large structure. The original temple was begun in the 1300s as a mausoleum for the father of the king at that time. The temple was finished around a hundred years later and housed the Emerald Buddha until the temple was demolished in an earthquake. A replica of the Buddha, made from darker jade, now sits in the temple. This is a historic temple that is built of three chedis. This temple stands on the site of the royal palace, which was built in 1350 and replaced by the temple in the 15th Century. The temple was destroyed by the Burmese in the 1700s, but the chedis were reconstructed in the mid-20th Century. 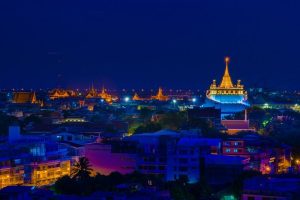 Wat Saket rises like a fairytale castle against the modern skyline of Bangkok. It is often called the Golden Mount because of its imposing height and gold architecture. The temple was built shortly after the founding of Bangkok and is one of the most significant historic buildings in the area. The views of Bangkok from the temple are magnificent, making it a climb worth making, even if you didn’t already care about the beauty, historical significance, and artistic qualities of the temple. Located in Ayutthaya Historical Park, this temple is one of the main reasons that tourists visit Ayutthaya. This Buddhist temple is on the west bank of the Chao Phraya River, near the Historic City of Ayutthaya. It was first built in 1630 as a memorial to the king’s mother. At one time, it was filled with 120 Buddha statues and has a beautiful roof, but today only the ruins remain—a shadow of the temple’s former magnificence.

If Thailand is already on your bucket list, why not add a few of these incredible temples, as well? Thailand’s temples are some of the most fascinating and beautiful attractions in all of Asia, and they carry much of the devotion, richness, and history of Thailand within their ornamented walls. If anything in Thailand is worth seeing, it’s these amazing holy sites.

FacebookTwitterPinterestEmailLinkedInWhatsApp
Tags: golden Buddha, temple in all of Thailand, Temple of Dawn, Temple of the Golden Buddha, Thai temples
Search here…
Start your own Website