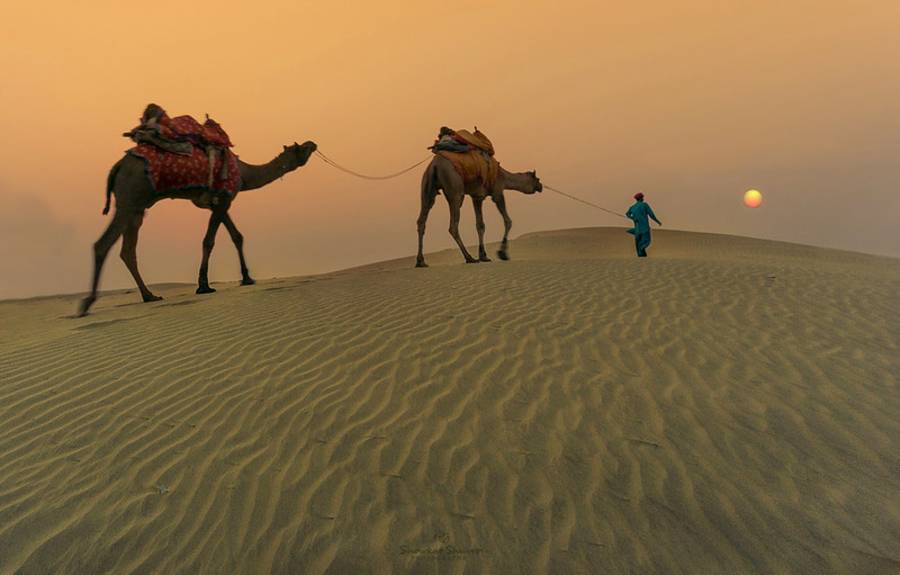 Where is the Thar Desert?

Jaipur, the capital of Rajasthan, is the main airport to enter the state. The domestic airline’s services connect Jaipur to cities like Delhi, Mumbai, Aurangabad, Udaipur, Jodhpur, etc. Udaipur and Jodhpur are the other major airports. The state is well connected by rail to the major parts of the country. The Palace On Wheels is one of the most luxurious trains in the world. Rajasthan has a good rod-network as well. A Camel Safari could be one’s best option to explore the quaint villages of the region, thereby gaining an insight into the pulsating traditions and the vibrant culture of the locals. A camel safari can span from 2 to 7 days, covering a distance of around 40-50 km a day. This safari is an opportunity to visit places like Bikaner, Khimsar, Osian, and Jaisalmer. The most fascinating part of the safari is halting at night in the midst of the desert to sleep. The delicious dinner is prepared on the sand dunes while the riders rest and converse among themselves. A Jeep Safari is another option to explore the royal Rajasthan and to enjoy the scenic surroundings of the countryside. Setting out on a Jeep Safari will make you able to observe the various colorful facets of the state of Rajasthan. It will prove to be a lifetime experience for the tourists and the visitors of the region. Safaris are conducted in the desert areas of Jaisalmer, Bikaner, Jodhpur, Pushkar, and Shekhawati regions. The duration of a safari can extend from a single day to a month, though the most sought after ones are those ranging from one to two weeks. Located at a distance of 285 km east of Jaisalmer, Jodhpur is yet another attraction for the Thar Desert visitors. On the ground of the blue color dominating the city, it is also called the ‘Blue City. Attractions in Jodhpur include names like Mehrangarh Fort, Jaswant Thada, Umaid Bhavan Palace, and Mandore Gardens. The city of Bikaner was founded by Rao Bikaji in 1488 AD. The city covers a major part of the Thar Desert regions. In Bikaner, there are attractions like the Junagadh Fort, the Lalgadh Palace, Camel Research and Breeding Farm and the Ganga Golden Jubilee Museum.

How diverse is the wildlife / vegetation?

The Thar Desert region is home to some wildlife species, which are on the verge of being extinct in other parts of the country. The animal species include the Great Indian Bustard, the Blackbuck, the Indian Gazelle, and the Indian Wild Ass. The Desert National Park, Jaisalmer, covers an area of 3162 sq km. The park is a fine example of the diverse fauna of the region. The inmates of the park include the Great Indian Bustard, Blackbuck, Chinkara, Desert Fox, Bengal Fox, Wolf, Desert Cat, etc. The migratory and the resident birds like eagles, falcons, buzzards, kestrels, vultures, etc.