Brazil is a fascinating country to visit. Being the 5th largest nation in the world and home to the world’s second-largest river, the Amazon, more and more people are longing to visit this country. Brazil in general has a tropical climate but with its wide land coverage, it also has some weather variations. It has the most diverse ecosystem which includes the Amazon rainforest and has various land characteristics such as wide mountain ranges, hills, plains, and a very complex river system. All of these contribute to the natural beauty of Brazil aside from the eclectic culture and interesting people.

If you are planning a grand vacation in Brazil you must be prepared physically as well as mentally before diving into its rich culture and abundant natural beauties. Take some time to plan your travel well. Get to know the exact locations in Brazil that you will include in your travel as well as the people in that community and the culture. Since this could be your first-time traveling to Brazil it would be a smart move to learn more about the uniqueness of this country. There would be major differences that you should be familiar with to avoid any untoward incidents. It is also great to learn some useful Portuguese phrases.

Getting Started: Traveling to Brazil

Visa and immigration Issues– Traveling to Brazil requires you to have a tourist visa and this is good for up to 90 days. Make sure that you understand the requirements as well as regulations on the Brazilian embassy. Always have a return plane ticket with you as a sign of your intention to head back home prior to the 90-day period of allowable stay. Make sure before packing for your flight to learn about the stuff that is allowed or not allowed according to their regulations to avoid any trouble.

Vaccinations – Although traveling to Brazil would not require any vaccine, as a safety precaution and as per recommendation by the CDC having routine vaccines would be beneficial. But in some cases that you will include in your Brazil tour, certain areas like states of Acre, Amazonas, Amapa, Para, Tocantins, Goias, Mato Grosso do Sul, Minas Gerais, Roraima, Rondonia, Iguassu Falls, and Distrito Federal (includes the capital city of Brasilia) are areas with a high risk of transmitting Yellow Fever. Better get a vaccination and protect your health.

Traveling to Brazil is much expensive than in other countries in South America, especially around the carnival and holiday seasons. During the months of December to February, hotel or lodging accommodations and other travel expenses will generally increase up to 30% more. If you stay in cheap hostels or couch surf, and prepare your own meals or buy street food, you can get around for less. Having said that, a good $100 a day will give you a decent place to stay and good meals. Now if you want the finest things in life and would have some extra cash to spare a good $300. per day budget would land you a 5-star hotel accommodation and great fine dining. Aside from the daily expenditures better check the details of your itinerary. This of course will include bus fares, entrance fees, travel guides, and other stuff.

While most people head to Brazil for its world-famous party cities and exciting nightlife, the country also has plenty of adventures waiting for you that are off the beaten path. The majority of Brazil is almost untouched by tourism, including its massive national parks, colonial towns, and remote spots for kayaking and horseback riding.

Here are five amazing destinations you should check out if you’d like to skip the overdone tourist spots. This stunning national park is about three and a half hours from Brasilia, right in the center of the country. It’s known for its breathtaking rock formations that were created by the river flowing through. Many mystics also travel to the park, claiming the crystal soil here grants powers, while the park has its fair share of UFO sightings. You can actually see the precious crystals and gemstones gleaming in the ground as you walk through the park, and walking is definitely the best way to tackle this mammoth area. You’ll find hiking paths of varying difficulties, from long, relaxing day walks to difficult excursions that take days to complete. The park also attracts thousands of people each year who enjoy rappelling the waterfalls. 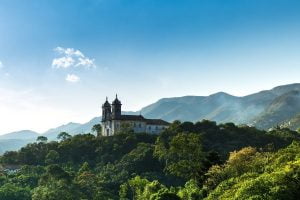 This beautiful colonial town is actually where the first gold rush of the world occurred back in the 1700′s. Today, it’s an area with well-preserved colonial landmarks, like the small town of Ooru Preto or Tiradentes, which has a massive food festival each year. The entire area is known locally for its amazing food, with creative, fresh meals served at nearly every establishment. If you want to learn more about the culture and history of the area, be sure to take a guided tour. This very remote area is a six-hour bus drive away from Salvador, although you’ll find no shortage of things to do. This getaway is for the real nature lover, with horseback riding, walking trails, and kayaking, along with cave exploration. The entire area has extensive cave systems which are utterly black with clear, running water. You’ll discover largely hidden cave formations that can only be reached by snorkeling with a light. If you’re planning a trip here, base yourself out of Lencois in the Hotel Canto das Aguas. This small town sits right at the base of a large waterfall and the hotel sits right on the edge, allowing you to fall asleep to the sound of a rushing waterfall outside of your window. 150 miles from Bonito lies the beautiful waters from three separate rivers, the Bama Bonita, the Securi, and the Formosa, which have filtered through bedrock rich in calcium to create natural pools of the clearest water you’ll ever see. While normally these crystal-clear waters do not support much life, the pools of Bonito are rich with aquatic life and no one knows why. The Aquario Natural pool has hundreds of brightly colored fish and you can actually swim with the fish with a wetsuit and snorkel and enjoy this natural aquarium. 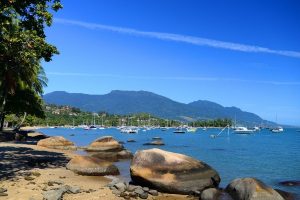 Of the coast of Sao Paolo lies the island of Ilhabela, which remains uninhabited despite attempts in the 1800′s to set up plantations. This beautiful island was basically abandoned and now remains covered with pristine rainforest and beaches that are close to inaccessible on its coast. A single operator, however, offers multi-day excursions to the island, where you travel in a 4×4 on the first day to enjoy mountain biking along waterfalls and through the rainforest to reach a beach on the far-off shore. The following day takes you kayaking to an isolated beach on the island, while day three rounds out your tour with hiking to a magnificent waterfall. The entire multi-sport expedition lasts for about four days and then you’re taken back to a beach close to the mainland.