Places To Visit In Indonesia: When people hear the word “Indonesia”, they likely think of some land-locked landmass somewhere in Asia. In reality, nothing could be farther from the truth. Indonesia is actually comprised of nearly 20,000 islands. Being such a tropical location, there are some amazing flora and fauna unique to Indonesia that you must experience if you ever go. There are many popular tourists draws that should not be missed as well. In this article, we’re going to look at ten places to include in your itinerary when planning a trip to Indonesia. Locals adorn 100 bulls with gold, flowers, and vibrant colors are paraded around a crowded arena by individual jockeys. The jockeys race the bulls in a 100-meter dash around a track and the winners are awarded prizes, gifts, and admiration of the spectators. The major races are held in Bangkalan, Pamekesan, and Sumanep at various times throughout the year.

2. Komodo and The Komodo Dragons Komodo dragons are known around the world as being the largest reptile in existence. Many people have them as pets. However, on their home island of Komodo in Indonesia, they are revered as man-eating beasts which should be approached with caution â€“ if at all. Because of the notorious reputation of these reptiles and the dangerous currents surrounding Komodo, few people have ventured near it. Because of this, much of the island’s natural wildlife and plant life has not been disturbed. Visitors can visit the island today but must be accompanied by an experienced park ranger during their visit. Taman Mini is a 300-acre amusement park, inspired by an Indonesian delegate’s trip to Disney World in the 1970s. The park offers traditional amusement fare as well as cultural displays, performances, and other activities. The park is located in Jakarta and is open daily from 9 am until 5 pm. Borobudur Temple is the largest Buddhist temple in the world. Constructed during the Cailendra Dynasty during the 8th century, the temple has seven terraces and its surrounding walls span a total of six kilometers. The temple is located between Semarang and Yogyakarta. Bali is one of the richest countries in the world. Four million inhabitants call this island home. The beaches of Bali are world-famous for being some of the most popular and pristine beaches on the planet. 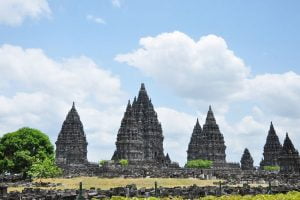 Prambanan Temple is one of the largest Hindu temples in Asia. Its three main shrines are dedicated to Hindu gods: Brahma, Shiva, and Vishnu. Tourists travel from all over the world to see the sunrise from behind this massive holy complex. Ragunan Zoo, located in Jakarta, is one of the very best zoos in all of Indonesia. The Ragunan Zoo was established in 1864 and is home to over 4,000 animals â€“ both foreign and domestic. Wayang comes from the Japanese word and describes a theatrical performance with actors, puppets, and/or illuminated shadows. These performances are steeped in the Indonesian culture and are put on for a wide variety of occasions. The performances are also educational experiences because most of them teach some type of life lesson. 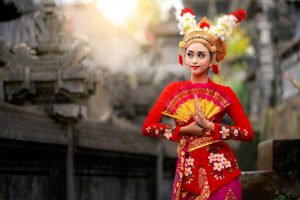 Traditional dances of Indonesia are performed in most major cities. Usually, there is no musical accompaniment. The dancers chant as they dance, which provides the rhythm for their steps. Most traditional dances tell a story, like the Kecak dance for example. It tells how an evil king was overthrown by an army of white monkeys after he attempted to steal another’s wife. The Ramayana Ballet also tells Indonesian stories through its performances as well. 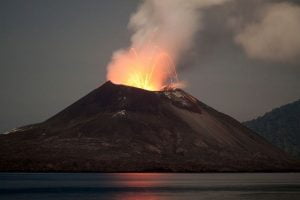 This legendary volcano erupted in 1883 with such force that rock, lava, and ash were thrown 80km into the air. The ash inundated Singapore and left the region blanketed beneath it for two days. The ash stayed in the Earth’s orbit for an entire three years after the eruption. The eruption created tidal waves that drowned everything for miles around the volcano’s base. After the ash settled, natives realized the volcano had destroyed even itself, leaving nothing but smoking lava in its wake â€“ which went on to create more islands. Today a small volcano, aptly named Anak Krakatau or Krakatau’s Child, stands in its place.

More information – Indonesia’s dry season runs from June through October, with the rainy season spanning November through July. Although the humidity in Indonesia is always high, temperatures are relatively cool, ranging from 41F to 62F year-round. You do need a visa to travel to Indonesia unless you are a national of a select group of countries. Check with travel officials to see if your home country is on the list. There are certain points of arrival and departure that you must go through to enter and leave the country so make sure to check with your travel adviser before making your trip to plan your route accordingly.