Agra Tourism and Places to visit in Agra

Agra Tourism: Agra, a historical city, situated on the banks of the Yamuna River was once the capital of India in Mughal Empire. It has many magnificent forts, palaces, and monuments that entice thousands of tourists all over the world. Agra is situated in Uttar Pradesh, only 203 Km away from Delhi which only takes 3 hours to reach by train. It means you can easily plan your upcoming long weekend tour in Agra. It comes in a golden triangle tourist circuit along with Delhi and Jaipur.

Top Places to visit in Agra

Taj Mahal is undoubtedly one of the most beautiful monuments in the world. It is a world heritage site and comes in the Seven Wonders of the World. Millions of Tourists visit the Taj Mahal every year. Mughal emperor Shahjahan built this outstanding monument in the memory of his beloved wife Mumtaj. Taj Mahal is the eternal symbol of true love and the best gift ever given by a passionate lover to his beloved.

20,000 men toiled hard for 22 years to erect this beautiful monument. It is built with the finest white marble and precious stone. View of the Taj Mahal on a full moon night is an out-of-the-world experience. Agra Fort is situated just 2 KM away from the Taj Mahal and it is a world heritage site. While the Taj Mahal is built out of sorrow and signifies love, the Agra Fort is a symbol of power and victory. It is one of the finest examples of Mughal architecture. It was initially built by Sikandar Lodi and then modified and renovated by Akbar.

The fort is extended into an area of 94 acres with more than 2 dozes of monuments including palaces and mosques. It has a gate in each direction out of which one gate named ‘Khizari Gate’ leads to the Yamuna River banks. The Fort is so strong that it has survived many attacks and still stands intact before us. This is the place where Aurangzeb had imprisoned his father until he died. Fatehpur Sikri was founded in 1569 By Akbar and it was the capital of the Mughal Empire for a short span of 14 years from 1571 to 1585. Akbar shifted his capital from Agra to Fatehpur Sikari to honor a Sufi saint Salim Chisti and it took 15 years to construct and establish the city. The architecture of Fatehpur Sikari is a blend of various styles including Hindu, Jain, Persian, and Mughal.

It is a world heritage site and contains many famous buildings. 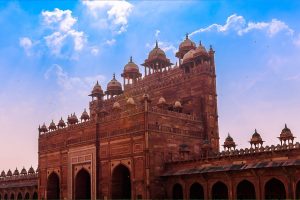 Buland Darwaza was made by Akbar in 1601 as a memoir of his victory in southern India. It is built with red and buff sandstone and white and black marble are used in decorating towers and courtyards. It is 50 meters tall gate from the ground and it has inscriptions in the Persian language describing Akbar’s victory over Uttar Pradesh and Gujarat and his religious open-mindedness. Jama Masjid means chief mosque of a city, there are many Jama Masjids in India. It is one of the oldest mosques in India. It was a get-together place in Akbar’s time and thousands of Mughals including people from royal families used to offer Namaaz here.

The Tomb of Salim Chishti is built in the courtyard of Jama Masjid. The tomb is beautifully carved and marble are enclosed on every side, white marble, jails, and a wooden canopy are also used in it. Salim Chishti was a Sufi Saint and successor of Khwaja Moinuddin Chishti. Akbar had high regard for the saint, it is said that he had got three children with the blessing of Salim Chishti.