Architectural Marvels Of Spain: Spain is home to every period of art and architecture that has ever been bestowed upon this world. In terms of UNESCO World Heritage Sites, Spain is the country with the second highest amount of buildings on the list, beaten only by Italy. From Gaudí to Gehry, the works of these modern architects will mesmerize you. Spain has so much to offer that even spending months in a single place won’t be enough to explore everything. With influences from the Romans to the Moors, you’ll find each city has a unique architectural style. From the classic Andalusian architecture of Córdoba to the Moorish style of Granada, and the mix of Gothic and Modernista styles in Barcelona.

Out of all the beautiful places, here’s a list of the top 10 places that you just can’t miss. If you ever visit Barcelona, you couldn’t miss it. One of the most spectacular buildings ever constructed by men, the vision of Spanish architect, Antoni Gaudí, known as God’s architect. It’s been under construction for over 130 years. Gaudí’s design was as complicated as it was advanced. Regarded as his finest works, the building will have 18 towers when completed, representing the apostles, evangelists, and Virgin Mary, and the highest one in the middle, representing Jesus Christ. Gaudí was profoundly devout and this was his way to make amends to God for the sins of the modern world. He has tried to write the history of the whole Catholic faith in one building.

2. City of Arts and Sciences, Valencia 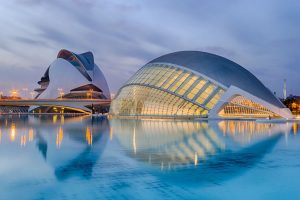 One of the most important modern tourist destinations in Valencia, the city of arts and sciences is a scientific and cultural leisure complex designed by the Valencian architect Santiago Calatrava. The complex is made up of various buildings namely Oceanogràfic, The Hemisfèric, Príncipe Felipe Science Museum, Palau de Les Arts Reina Sofía Opera house, The Umbracle, The Ágora, and The Assut De l’or Bridge. Hosting Europe’s largest aquarium and various exhibitions concerning science and technology, it is one of the most celebrated places to appreciate the modern architectural form in all its glory. With the philosophy “Not touching is prohibited” one is promised an interactive experience.

Set on the bank of the Nervión River in Bilbao, the Guggenheim museum is the epitome of modern architecture. The building in itself is so captivating that one is overwhelmed just by the mere sight of it. Designed by the renowned Canadian-American architect Frank Gehry in 1991, this museum exhibits one of the most spectacular modern architecture pieces in the world. The striking complex fabricated by glass, limestone, and titanium, displays an amalgamation of complex and swirling forms facilitating a realization of urban industrial design. The Alhambra is one of Europe’s most visited attractions. It is a palace and fortress complex located in Granada. Alhambra is a representation of Spain’s Islamic heritage and history and is described as “a pearl set in emeralds” in allusion to the color of its buildings and the woods around them. The carvings are so intricate and beautiful. The Alhambra is a UNESCO world heritage site and the inspiration for many romantic stories and legends. 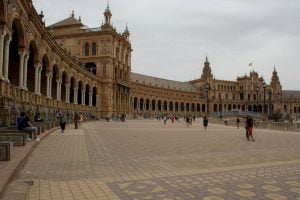 La Plaza de España concentrates the whole history of Spain. designed by Aníbal González, it is a blend of 1920s Art Deco and Spanish Renaissance Revival, Spanish Baroque Revival, and Neo-Mudéjar architecture styles. The Plaza de España complex is a huge half-circle with buildings continually running around the edge accessible over the moat by numerous bridges representing the four ancient kingdoms of Spain. Boating in the moat is a truly romantic experience.

Following Frank Gehry’s phenomenally successful Guggenheim Bilbao, This stunning structure is also designed by Frank Gehry and combines sandstone cubes topped with sweeping metal ribbons of gold and pink titanium rising out of the vineyards. Located in Rioja, the wine-production region of Spain, Hotel Marques de Riscal is a five-star hotel, with spas, a museum of viticulture, and a wine shop. The Cathedral of the Holy Cross and Saint Eulalia, also known as Barcelona Cathedral, is the Gothic cathedral and seat of the Archbishop of Barcelona. The cathedral was constructed from the 13th to 15th centuries, with the principal work done in the 14th century. The Cathedral is just as impressive inside as it is outside. Featuring a striking roof adorned with allegorical gargoyles and majestic bell towers that rise high into the sky, the exterior amazes the visitor with its grandeur and perfection of detail, but what stands out the most is the Gothic facade beautifully decorated with statues, pinnacles, and arches. There are many pilgrims who cry when they reach the end of the Camino de Santiago. They look up from the asphalt and break when they contemplate the facade of the Cathedral of Santiago de Compostela, an architectural beauty – a mixture of Baroque, Romanesque, and Gothic styles – built between 1075 and 1211. the cathedral soars above the city in a splendid jumble of spires and sculpture. You’ll be amazed by the interiors, which is adorned by chapels, towers, the cathedral treasure, the mythical Botafumeiro, and the jewels of the crown.

9. The Mosque-Cathedral of Córdoba Still called a Mosque, The Mezquita of Córdoba was a mosque turned into a Christian cathedral, which it has been used ever since. Cordoba’s mosque is one of the largest in the world and the finest achievement of Moorish architecture in Spain. Next to the Alhambra, it is one of the most splendid examples of Islamic art and architecture in western Europe. La Giralda tower, Seville Cathedral, and the Alcazar combine to form a UNESCO World Heritage Site. Seville Cathedral is the largest Gothic cathedral in the world and occupies the site of the great Aljama mosque, built in the late 12th century by the ruling Moorish Dynasty. The towering main altarpiece is covered in gold leaf. Constructed in the 1480’s it’s composed of hundreds of figures. It tells the life of Jesus in 40 scenes from his birth to his resurrection.