American Roadtrip Destinations: One of the most quintessential aspects of American culture is the classic road trip.

For decades, families have piled into an RV or automotive for a grand adventure across the nation – and for good reason! America is teeming with hundreds of trails and roadways, many of which hold a great deal of historical significance.

The next time you and your family want to take a break from the ordinary, consider taking a road trip or trail drive on one of these famous routes. Known by other names such as “Main Street of America” and “Mother Road”, Route 66 remains one of America’s most famous cross-country routes. Originally commissioned to connect Chicago and Los Angeles, the nearly 2,500-mile-long route is lined with classic neon-signed hotels, diners, major cities, and plenty of interesting sights and destinations. 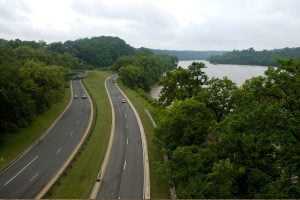 Tucked away from the business of Washington, D.C. lies a 25-mile trail jam-packed with history and beautiful scenery. Serving as a memorial to America’s first President George Washington, the trail starts at the founding father’s home at Mt. Vernon, eventually leading past the capitol and onto the end of the road, the Great Falls of the Potomac River. This road makes for an excellent day trip, but be sure to avoid rush hour!

Few take into account that America’s history started long before its European settlers arrived: the entire continent was home to many different tribes of Native Americans. One of the best ways to experience and learn about Native American history is to visit the Trail of the Ancients. This trail is not only considered America’s archaeological heartland but it’s also lined with the iconic sandstone pillars seen on many postcards. Although it may only take a few hours to drive the trail. A great way to see one of America’s most scenic states is to take a 40-mile drive along the Acadia Byway. Traveling along Maine’s rocky coast, you’ll experience and see vast pine forests and lakes, as well as the scenic town of Bar Harbor in Frenchman’s Bay. At the end of the road is the picturesque Acadia National Park.. Said to be one of America’s most-loved driving destinations, California State’s Route 1 – sometimes known as the Pacific Coast Highway – hugs central California’s Pacific Coast. Whether you start in Monterey or Santa Barbara, this route is filled with enough fun stop-offs and side trips to last at least two days. For more information about Route 1. There’s no denying that Historic National Road lives up to its name: it was the first roadway ever commissioned in the United States. This 200-year-old road helped transport people and goods west and is now lined with many historic destinations and landmarks.

Traveling alongside two of North America’s Great Lakes, the 520-mile-long Great Lakes Seaway Trail will take you along a scenic coastal route that includes Niagara Falls, the 1,000 islands, 29 lighthouses, and several other historical destinations. If the 25 short miles of the George Washington National Memorial Parkway isn’t enough, here’s another Washington-related route that takes a little longer. This 136-mile loop runs along the Eastern panhandle of West Virginia, taking you through historical destinations relevant to Washington’s life, such as Harper’s Ferry, Charles Town, and the spa town of Berkeley Springs. For the Civil War buff, this 180-mile goes without equal when it comes to historical significance. Starting in Gettysburg, Pennsylvania, the route consists of many of the Civil War’s most important battlefields, such as Antietam and Manassas. Along the way are the homes of Thomas Jefferson and James Madison, as well as the Eisenhower National Historic Site.

Alabama’s Route 80 is the site of two major events in Civil Rights History. On March 7th, 1969, a 54-mile march from Selma to the capitol Montgomery resulted in a violent police confrontation, giving it the name “Bloody Sunday”. Two weeks later, Martin Luther King Jr. led a march that grew from only a few hundred to 25,000. Today, there are various landmarks, museums, and memorials to visit along the route.