10 Places To Visit In Udaipur 10 Places To Visit In Udaipur

Places To Visit In Udaipur: India is a diverse country, with diverse people, diverse religions, diverse languages, and most importantly diverse lands! Mountains in the north, desert in the west, a plateau in the south, and water around the three sides. Name it, and you would find that type of climate in this magnificent country. Name it, and you’ll find your favorite foreign destination right here! Want to travel to the canals of the romantic Venice, fret not, India has its very own Venice of the East, Udaipur!

With the Aravalli hills on one side and lakes dotting the map, Udaipur is one of the best holiday destinations in India. With so much to look around, the following are the 10 places you must put on your list of places to visit in the City of Lakes.

The biggest attraction of Udaipur, the City Palace is a 16th-century palace built on the banks of the serene Pichola Lake. The sprawling palace in itself houses 11 splendid palaces with wonderfully designed courtyards, pavilions, hanging gardens, terraces, etc., all inspired by Chinese, Medieval and European styles of architecture. The rooms have beautiful paintings and artifacts depicting the historical events one after the other and the significance of each room in the complex. The view of the city with pearl white buildings dotting the landscape is breathtaking! The city palace has a heritage hotel within its complex and the rest is a museum for public visit.

Location – The Palace is 21 Km from Udaipur Airport and is easily accessible by car or public transport. 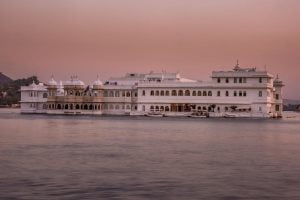 The oldest and one of the largest lakes in the city, Lake Pichola has a charm of its own which attracts tourists like no other lake.  Its magnificence is enhanced by the splendid beauty of the palaces, bathing ghats and hills, enveloping it. The lake has 4 islands within it, each with a palace of its own. The famous Lake Palace and Jag Mandir lie on this pristine beauty. A boat ride during the sunset or sunrise is mandatory to witness the real beauty hidden in Pichola Lake.

Location – It is the bank of the City Palace and access to boat rides is from Rameshwar Ghat within the Palace complex. Entry from Lal Ghat is also possible without entering the palace complex. Sitting atop the Aravalli Hill is the fairy-tale castle-like Sajjangarh palace or the Monsoon Palace. This 19th-century palace was built to watch the monsoon clouds. The palace overlooks the Sajjangarh Wildlife Sanctuary, a reserve for nilgai, wild boars, reptiles, panthers, and jackals. The best time to visit the palace is during the sunset when this hilltop palace gazes at the splendid sunset amongst the Lake Pichola and Aravalli hills. This palace is mainly visited by tourists and photographers for this awe-inspiring scenery.

Location – The Palace is 5 Km west of Udaipur city and both cars and auto-rickshaws are available for the visit. 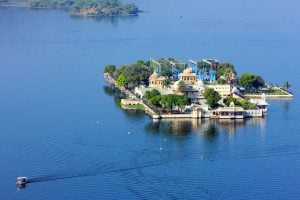 The lake-island palace of Jag Mandir or Lake Garden Palace is located on the pristine Lake Pichola. This palace was used by the royal family as a summer resort and for hosting parties. This yellow sandstone and marble three-story palace is said to have been a refuge for Shah Jahan and his family for more than a year. Other than that various Europeans also had taken refuge in this palace during the 1857 war.  The most tourist-attracting part of the palace is the Gul Mahal which was Shah Jahan’s refuge. Other parts of the palace are the Zenana Mahal, Kunwar Pad aka Mahal, Barah Patthar ka Mahal, beautiful courtyards, and lovely gardens. A boat ride on Lake Pichola no doubt deserves a visit to this lovely abode. Overlooking the Lake Pichola by the Ganghaur Ghat, the massive palace has 138 rooms with intricate glass and mirror work, magnificent Mewari frescoes, and the famous two peacocks made out of colored glass mosaics. The restored haveli has been turned into a museum depicting the aristocratic lifestyle of the Mewar kingdom. The evening lightens up the haveli traditional Rajasthani cultural shows like dance and music performances. Other than various artifacts that reside in this haveli, you can also find the world’s biggest turban in one of the museum rooms! 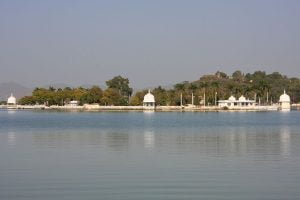 To the north of Lake Pichola, sitting peacefully is the Fateh Sagar Lake.  Flanked by mountains on its three sides and Pratap Memorial in the north, Fatehsagar is considered to be the pride of Udaipur.  The lake houses three small islands, with the largest one developed into a park called Nehru Park, the second one converted into a garden with several wonderful waterjet fountains, and the third one is now home to the Udaipur Solar observatory. Thanks to the pristine blue color of the lake and the lush green hilly backdrop, it has been nicknamed the second Kashmir of India. Speed Boating through the lake is a popular tourist attraction!

Location – 2.8 km from City Palace, the lake is easily accessible by car or public transport. This 18th-century ornamental garden was built for the recreation of the princess’ 48 women attendants. Set by the embankment of Fatehsagar Lake, this beautiful garden has lovely lotus pools, marble elephants, sparkling fountains, and kiosks. This garden is one of the most beautiful gardens in the city and is a major attraction of all the Udaipur tourist places. The largest temple in the city of lakes, Jagdish mandir is situated inside the Udaipur City Palace Complex and is known for its Indo-Aryan style of architecture. This 17th-century temple is dedicated to Lord Vishnu (the Preserver) and is garlanded with beautifully carved pillars, decorated walls, and ceilings. The Shikhar or spire of the main temple is about 80 ft high dominating the city’s skyline! The main idol of Lord Vishnu is said to be carved out of one single black stone piece. This divine abode is a great example of splendid architecture and its connection to the supreme power. Also known as Sajjan Niwas Garden, Gulab Bagh is the city’s largest garden spreading over 100 acres of land. As the name suggests, the garden has an abundance of roses of numerous varieties of it. The lovely roses and orchids and the robust trees leave the visitor’s soul full of tranquility.  The garden also has a small zoo and a toy train that meanders all around the land. The garden also houses a library and museum called the Victoria Hall museum which has a collection of royal artifacts, antiques, and curios.

Location – to the southeast of City Palace Complex, near Lake Pichola. 3 km west of Fatehsagar sits a one-of-a-kind crafts village, Shilpgram. With a dusty but colorful setting, ship ram has 26 village houses from Gujarat, Rajasthan, Maharashtra, and Goa. With its glittering and colorful craft exhibits, the shilpgram is also known for its extravagant traditional performances be it dance, music, or theatres. The best time to visit the village is in the last 10 days of December, the time of the annual fair which is a fantastic spectacle with hundreds of artisans flanking the fair from all around the country to perform and exhibit their art.