Athens is a fantastic city with a lot of history, at the same time though this big city sometimes surprises people with its size and with what a variety of different districts there are.

To be honest, a lot of Athens is a little dirty and dilapidated but this shouldn’t keep you away from the center of the city and the old part of the city, areas like Plaka and Syntagma, are wonderful places to stay or explore. Whether you want to study the history of Athens as the main part of your trip, a smaller part of your trip or want to do something totally different such as a shop, or have some great nights out Athens can offer you this.

The history of this city is a long one and you will find that it wasn’t simply built by the Ancient Greeks or Romans and then preserved until this day; the Ottomans especially are responsible for a lot of damage. There is a lot still to see from the cities past though: both at sites such as the Acropolis and in museums such as the National Archaeological Museum.

Places to Visit in Athens

The Acropolis and Parthenon Even if you are just passing through Athens, perhaps going to Piraeus to take a ferry or cruise ship, you should try and make a visit to the Acropolis and Parthenon. Rightly Athen’s most famous attraction the ancient Acropolis site gives you an idea of the city’s history and of the advancement the ancient Greeks had some 2 and a half millennia ago when the Parthenon was built.

First, let’s be clear about what we are talking about the Acropolis is the entire hilltop site and actually, an acropolis of which there are many in Greece, the English equivalent would be a Citadel or Hill Top Fort, this being the most famous and significant it has become known as The Acropolis. The Parthenon is the main temple itself, dedicated to the god Athena and built between 447BC and 438 BC.

The Acropolis site you can visit for free, be aware it is steep getting up here but you will find a wide variety of remains on the way that you can stop and examine while you catch your breath. The Acropolis is at the top of a flat-topped hill; you can view remains such as the Altar of Zeus on the site, the view from the Acropolis across Athens is fantastic and you can see the Parthenon up quite close. To enter the Parthenon you will need to take a tour through which there may be long waits in summer but this is well worth it to see one of the most astounding ancient remains anywhere in Greece or the world.

The Temple of Olympian Zeus 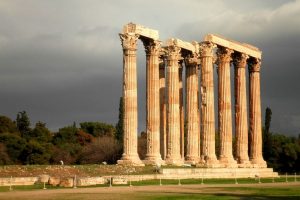 The Temple of Zeus is close to the Acropolis and you may want to visit it on the same day. The Temple of Zeus’ site shows the size of the original temple but only some columns are still standing and one can be seen still where it fell. It isn’t that this small site isn’t worth visiting but there isn’t very much of it and it shouldn’t take more than an hour to take it in, though you may want to spend time in the very pleasant surrounding National Gardens.

In the gardens around the site, you will also find Hadrian’s Arch, a Roman-era remain, and the 1896 Olympic Stadium, a must-see for fans of more recent architecture. The National Archaeological Museum of Greece in Athens is one of the world’s most important museums of Ancient Antiquities and is a great opportunity to bring a better understanding of the Ancient Greek Civilisation and see artifacts from around the country showing the differences between the cultures of the different Greek City-states.

The museum is the perfect complement to the Greek sites such as the Acropolis to improve the enjoyment of each; the Archaeological museum is extensive enough you may want to spend two days here: perhaps one before a day at the ancient sites in Athens and one day after may be ideal to best understand Ancient Greek history. From Lykavittos hill, also known as Mount Lycabettus, you can see most of Athens as well as to the sea and across to the Acropolis. The city looks beautiful from up here and it is ideal for watching the sunset over the city and taking some great shots. To get to the highest point in the city you can either take the modern Funicular railway or go on foot for a very good workout, though there are solid steps all the way.

You may not think of Athens as a beach resort but on the outskirts of the city are some fantastic beaches, very popular with the locals and surprisingly clean with the waters of the Aegean being beautifully clean and warm.

Many of the beaches can be reached with the city public transport, some are close to Piraeus that can be reached on the Metro but nicer beaches are further along the coast. The best beaches start from around the Kavouri-Vouliagmeni area, go to Astir beach and you get the ruins of an ancient temple to Apollo thrown in. Plaka is one of the areas of Athens that is how you might expect Athens to be before you visit: it has plenty of older buildings and some Roman-era remains dotted around. Many of the streets are narrow and cobbled and dotted with boutique shops and many of the cities best restaurants as well as cafes.

Plaka is the historic heart of Athens near to the Acropolis and the very center is expensive and trendy. Close by though is the district of Monastiraki, which is full of second-hand stores and other interesting shops, selling books, records, bric-a-brac, clothing, and of course souvenirs for tourists. Syntagma is a transport hub with many buses stopping here and with the metro station on lines 3 and 2. Syntagma is probably the best place to stay to easily reach the rest of the city and if you want to go for a night out here, it is an expensive area as well though.

While Plaka is the heart of the old city Syntagma is the modern face of the city, this is where you will find banks and where many of the city’s big businesses are based. If you want to visit the Parliament building you need to come to Syntagma Square as well to see the building that was previously the Royal Palace; by the Greek Parliament building is the tomb of the unknown soldier and guarding the tomb and parliament are the famous Evzones.

Syntagma is another good place to eat and drink and there are more cafes and fast food outlets here than in Plaka. For shopping head along the long Ermou Street and the streets running parallel to it. Ermou street is where all of the best fashion outlets in the city can be found.

Athens may not be exactly the city you expect; not a modern western city exactly, not really eastern European, and not purely a historic relic: Athens is all of these at once and a lot more besides. The only way to really understand Athens is to go there and start exploring.